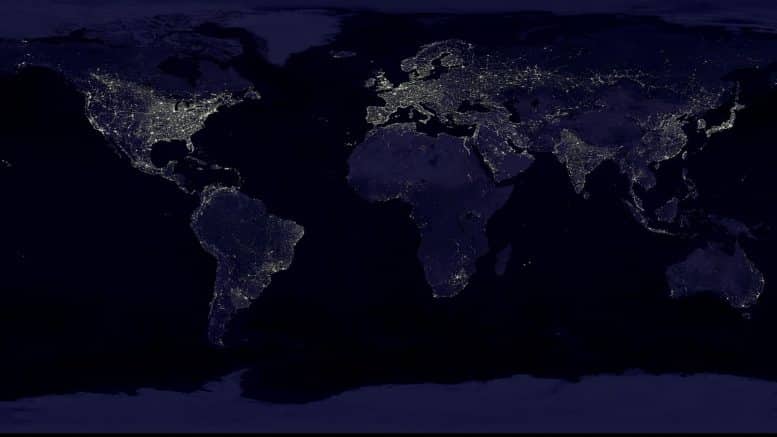 TN has long-held that as a Technocracy, China was faking economic data about its fully-engineered society. This is a natural result of insisting that your predicted outcomes must be correct, so data to the contrary is simply ignored. In short, the Technocrat mind cannot be wrong, so always make it look ‘right’. ⁃ TN Editor

China, Russia and other authoritarian countries inflate their official GDP figures by anywhere from 15 to 30 percent in a given year, according to a new analysis of a quarter-century of satellite data.

The working paper, by Luis R. Martinez of the University of Chicago, also found that authoritarian regimes are especially likely to artificially boost their gross domestic product numbers in the years before elections, and that the differences in GDP reporting between authoritarian and non-authoritarian countries can’t be explained by structural factors, such as urbanization, composition of the economy or access to electricity.

Martinez’s findings are derived from a novel data source: satellite imagery that tracks changes in the level of nighttime lighting within and between countries over time.

George Orwell once said that “if liberty means anything at all, it means the right to tell people what they do not want to hear,” a quote that Martinez says “summarizes the spirit” of his project.

“The key question that the paper tries to tackle is whether the checks and balances provided by democracy are able to constrain governments’ desire to manipulate information or, more specifically, their desire to exaggerate how well the economy is doing,” Martinez said via email. “The way I try to answer the question above is by comparing GDP (a self-reported indicator, prone to manipulation) and nighttime lights (recorded by satellites from outer space and much harder to manipulate) as measures of economic activity.”

esearch published in 2012 by economists from Brown University and the National Bureau of Economic Research showed how changes in nighttime lighting closely tracked with changes in economic activity. “Consumption of nearly all goods in the evening requires lights,” that paper explained. “As income rises, so does light usage per person, in both consumption activities and many investment activities.”

As a result, increases in nighttime lighting generally track with increases in GDP. You can see the principle at work in the side-by-side NASA images of India at night in 2012 and 2016. Over that period, India’s economic output increased from $1.9 trillion in 2012 to $2.3 trillion in 2016.

Martinez wanted to see whether the relationship between increases in lighting and increases in GDP was different for more-authoritarian countries: “Is it the case that the same amount of growth in nighttime lights is associated with systematically larger amounts of GDP growth in more authoritarian regimes?” The answer, he found, was an unequivocal “yes.”

Martinez sorted the world’s countries by their Freedom House score, which classifies countries on a spectrum ranging from “free” to “not free,” based on categories such as civil rights protections and civil liberties. He then looked at how changes in nighttime lighting correlated with the countries’ self-reported GDP measures.

For the world’s freest democracies – places such as the United States, Canada and Western Europe – a 10 percent increase in the average intensity of nighttime lighting in a given year correlated with, on average, a 2.4 percent increase in year-over-year GDP. Less free and open countries, however, reported larger GDP gains for the same percent change in nighttime lighting. And the least-free countries of all showed huge increases in annual GDP relative to the freest countries, working out to between a half and a full percentage point of extra GDP for the same light increase.