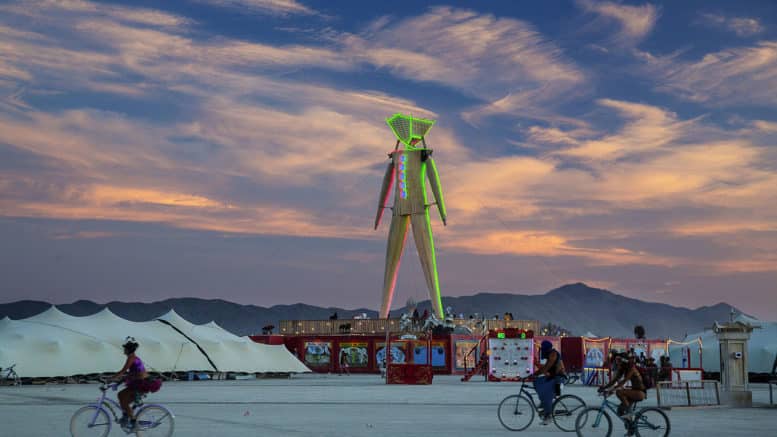 Please Share This Story!
PDF 📄
It’s the ultimate annual destination for top Silicon Valley techies to practice hedonistic pleasure, drugs, eastern spirituality and social engineering. This year could see as many as 100,000 people create a pop-up city in a northern Nevada desert. The Utopia-like Technocrat culture is ‘other-worldly’. ⁃ TN Editor

Over the last year, at lunches with various Silicon Valley entrepreneurs, I have been offered: Several chances to microdose on LSD (pass!); at least four suggestions that magic mushrooms will help me become a better reporter (maybe); three declarations that Ecstasy will make me a nicer person (doubt it); and now that it is legal in California, weed, weed and more weed in every conceivable delivery method (yum, gummy bears!).

And, of course, ayahuasca, a brew made from plants that includes the hallucinogen DMT. The well-known tech exec (who, like most people for this article, asked not to be named, for obvious reasons) who urged me to try it with him was nearly ecstatic on the subject. “It is the thing to reach the next level of innovation,” he said. “And you don’t throw up that much.”

He had me until vomiting. Thanks, but no thanks.

Last week The New York Times reported that some on the board of Tesla were worried that the company’s founder and chief executive, Elon Musk, “has on occasion used recreational drugs.” Some were blaming a series of his ill-conceived and possibly actionable tweets on the possible use of Ambien.

Now Burning Man, the annual gathering in Nevada’s Black Rock Desert, is about to begin. Techies and many others will flock there to look at art, dress in costumes, burn things and perhaps discover the next great start-up idea with the help of a tiny bit of ketamine.

This confluence of events made me curious about what is actually going on when it comes to drugs in the tech world these days. While the use of mind-altering substances here is nothing new, I spoke to just over a dozen people who all said consumption was increasing once again. Obviously, there are major problems with addiction to opiates and alcohol here, as elsewhere. But people in Silicon Valley tend to view drugs differently from those in places like, say, Hollywood and Wall Street. The point is less to let off steam or lose your inhibitions than to improve your mind.

“No one can afford to lose a step here anymore, so they want to hack the experience to make it work for their time-constrained schedules,” said one techie. “You want to be super lucid now.”

Another tech executive compares it to what Bradley Cooper did in the movie “Limitless,” about a man who uses a mystery drug to become much smarter than anyone else. “It was a terrible movie, but the idea of a having a heightened sense of awareness and also being totally functional appeals to people now,” he said. “Whatever can get you to that place without a lot of downside — like addiction — is preferred.”

That is why everyone he knows microdoses, saving the longer-acting drugs like Ecstasy for the rare occasions when they want to party and relax. As always, Adderall is often used to plow through work.

And marijuana, he told me, had become more like drinking a glass of wine, noting that he sees people openly vaping at tech events. Why? “No one does a stupid tweet on weed like they might on alcohol,” he said. “The most that happens is that you get lazy and eat badly.”