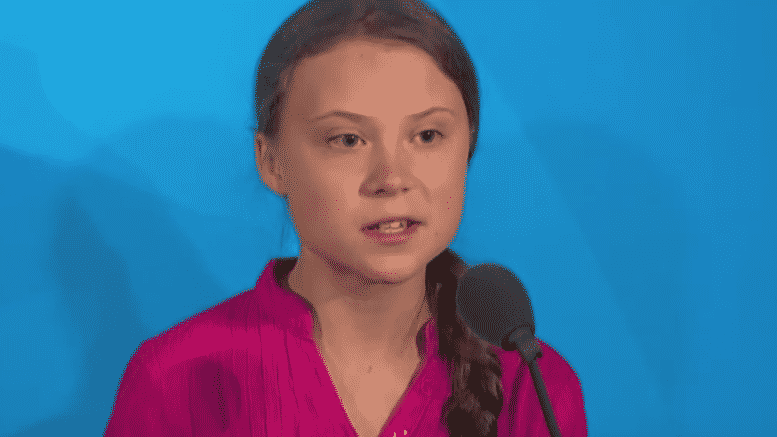 Please Share This Story!
PDF 📄
Despite her ignorance and lack of education, Greta Thunberg has risen to cult status in the eyes of all who worship the earth, and her public exposure dragnet is drawing in millions more. Her message of climate doom is driving other youngsters into depression and despair. ⁃ TN Editor

The Cult of Greta Thunberg is an extremely disturbing one, and one which marks a new low in the drain-circling that Western civilisation seems bent on. Even if I happened to believe that the naturally occurring gas that each of us breathes out many thousands of times per day, and which plants use for photosynthesis, is going to end up being the death of us, I would still be profoundly disturbed by the use of this girl — who is very clearly mentally unstable — as the poster-child for the agenda.

This video of her speaking at the UN is a case in point, as is her statement to the Davos crowd earlier this year, in which she decided to spread her own brand of hopeless misery to all:

Causes which are backed up by incontrovertible facts do not need the aid of slightly unnerving and emotive teenage girls to lead the charge. On the contrary, slightly unnerving and emotive teenage girls might be thought by a rational society to be somewhat of a hindrance to the facts, since they are likely to detract from them and move the issues from the realm of reason and rational discourse to emotion and feelings.

Which of course is exactly the point, and why she is where she is. Until this last year or so, it was perfectly possible to hold to the reasonable position that any changes to the global climate are not necessarily the product of human actions, without being considered unhinged. Yes, the utterly disingenuous charge of “Denier” was increasingly used to smear those who questioned the claims being made, implying that to hold such a position was akin to denying Nazi genocide against millions of Jewish people. But despite this, and the fact that most of the corporate media tended to treat the claim that humans are responsible for Climate Change as proven fact, it was still just about possible to dissent without being treated like a pariah and a very wicked person.

This situation was clearly intolerable to those who have the most to gain from propagating the claims, which is why — at least so it seems to me — they decided to up the ante, by using — and I do mean USING — a child to further their cause. And not just any child. One who has a history of depression and other mental illness, and who is capable of making extraordinarily emotional and “prophetic” appeals to “the world”. If it were all about facts, there would be no need for such tactics, yet the relentless pushing forward of such a person is clearly intended to close off of any remaining debate, since those who criticise her or her message can now automatically be portrayed as callous, stone-hearted oafs with not an ounce of compassion in them.

This is yet more emotive guff. No doubt there are some people who are very nasty to Miss Thunberg, and no doubt she has been subjected to some vile abuse. There are, after all, many vile people out there who like being vile to others. But it is perfectly possible to oppose her message, and perfectly reasonable to resent the fact that she is being exploited in this way to further an agenda pushed by those much higher up the food chain, without bearing her any ill or indeed being very wicked. Personally, I wish her every blessing, and that she will find both hope and happiness.

It is, however, worth remembering that it wasn’t from the camp of the so-called “Deniers” of facts and reason that the decision was taken to use an emotionally disturbed child to act as a global spokesperson and to make emotional appeals to the world. Rather, it was from those who claim to have the facts, the proof and the settled science. Why? If the science really is settled, and the facts really are incontrovertible, why the need to use a vulnerable girl to push the agenda, as has clearly happened?

On a personal level, I fear for Miss Thunberg. She will no doubt find out sooner or later that she has been exploited by those whom she thought were her friends, only to find out that they were prepared to drop her as soon as she had served their purpose. She will end up being a question in pub quizzes and Trivial Pursuit in 20 or 3o years (yes, I believe that the world, public houses and board games will still all be here).

On a societal level, frankly it all has the rather unpleasant whiff of a deliberate campaign to shame people into silence by the exploitation of a frankly very disturbed child. And the fact that there are people who are prepared to use this sort of emotive tactic to further their agenda is really quite sinister, and doesn’t bode well. We are periliously close to becoming a society entirely governed by emotion over reason, with the results being seen in the increasing inability of large swathes of people to even accept the possibility that views other than their own should be allowed.

Whether you agree with Miss Thunberg’s message, whether you are sceptical, or whether you reject it outright, her exploitation and the cult that has grown around her ought to disturb you.

I feel very sad for little Greta. Her parents must be completely climate duped and continually out-to-lunch to allow their child to be so blatantly used by criminals. I certainly wouldn’t want to be there the day Greta finally awakens and learns that they allowed her to be used as a pawn in a nasty worldwide game of chess among the self-appointed elites. I was 12-yrs-old when I discovered, quite by accident, that I was being purposefully lied to by adults who were supposed to be telling me the truth. That was NOT a pretty day for my parents. They… Read more »

Yeah, I feel sorry for her for being used in this manner. Watching the video is difficult because she is obviously very upset and fearful. However, computer simulations are interesting but not compelling. Most of the predictions made by computer modeling have not matched reality so it is obvious that we don’t yet understand climate well enough to make predictions many decades hence. I am most dismayed by her comments about CO2. I think most people can agree that there are things we can do to use our natural environment and resources better. But CO2 is not the problem it… Read more »

“…those teachers, parents and those in the media that caused this young woman so much fear of the future; Shame on you!”

A budding Jodie Foster, or another Craigslist Crisis Actor?

Has anyone ever seen this tiresome teenage scold smile? She is truly the face of hate in our time. Heaven forbid she get together with her counterpart, David Hogg — the Antichrist might result.

*The real reason Greta and Extinction Rebellion have invaded Canada.*

WATCH: Over A Barrel – 32 min (see link below)
The Foreign Funding Behind Activism Against Canadian Oil & Gas Industry.
Research shows this campaign is largely funded by U.S. groups such as the Tides Foundation & the Rockefeller Brothers Fund.
*Free to Oct 31
https://www.youtube.com/watch?v=NPax7r7Kv2c&feature=youtu.be
#OilSands #ClimateHoax