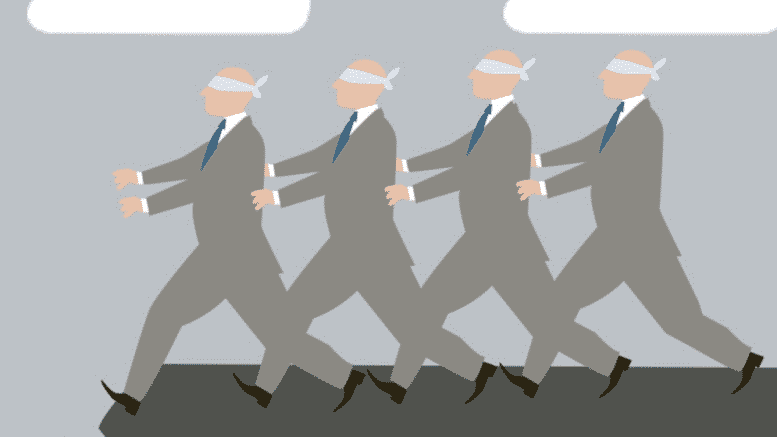 Please Share This Story!
PDF 📄
There is a mental virus far more dangerous than any coronavirus; that is, the one that leads to the elimination of reasonable thinking which in turn leads to the destruction of our economy and society at large. Technocrats who are orchestrating this madness are salivating for their day in the sun. ⁃ TN Editor

There’s no reason to be walking around with a mask. When you’re in the middle of an outbreak, wearing a mask might make people feel a little better and it might even block a droplet, but it’s not providing the perfect protection that people think it is. And often there are unintended consequences – people keep fiddling with the mask and they keep touching their face.” – DR. ANTHONY FAUCI

I never thought I’d see the day when publicly wearing a muzzle would constitute a proof of virtue in the same country whose government, less than twenty years ago, rationalized the bloody invasion of Afghanistan as a way of saving women from veiling their faces.

But then, I never thought I’d hear American liberals proudly denounce supporters of the US Constitution as a “death cult,” nor that I’d actually start to find Donald Trump sounding almost reasonable.

But at least there’s one thing we can all be sure about: “mainstream” news media, busily cheerleading for the death of freedom, will continue to gush with absurdities, self-contradictions and victim-shaming memes in their propaganda war to Keep America Gagged. The Bill of Rights (in case you haven’t noticed) is history; today, we demonstrate our patriotism by creeping around hiding our faces. Dissenters need not apply.

If you think I’m exaggerating, I suspect you haven’t been paying attention. Recently I had the poor judgment to turn on National Public Radio for about an hour, under the impression that I was going to learn something about the day’s news.

I could have saved myself the trouble. During the hour in question, I learned nothing at all about the presidential election campaign (now in its final months), nothing about the tens of millions of my fellow citizens whose jobs have been snatched away by government fiat, nothing about climate change, nuclear arms buildups, international refugees or growing worldwide poverty – nothing even about the intensification of air and water pollution authorized by recent federal regulation, although pollution kills an estimated 100,000 Americans every year.

No – for a solid hour, I heard the following: that COVID19 – in reality, at most, a moderately serious flu virus – is the worst medical threat the United States has ever faced; that this “deadly” virus (the word “deadly” was repeated obsessively, even though the disease is fatal in a tiny percentage of cases) has been empowered by a conspiracy of Republican politicians serving the arch-demon Donald Trump; that recent data showing the rapid decline in deaths attributable to the virus may have been faked, because the numbers aren’t what the “experts” want them to be; and that a massive increase in COVID19 tests – primarily among people between 20 and 40 years of age who are subjected to swabbing because their employers demand it, not because they’re in any danger – cannot possibly have anything to do with a rise in the number of reported infections, and that anyone who dares to suggest otherwise is “putting lives at risk.”

But the real theme of the hour was masks, masks, masks: how to make them, how to wear them, their different types, who doesn’t seem to have enough of them, and why muffling our faces (even though no such thing was ever demanded of us during dozens of past viral outbreaks) is absolutely, positively good for us all.

I waited in vain for some mention of the fact that every single order requiring the wearing of muzzles in the US is probably unconstitutional, a matter that National Public Radio – which once prided itself on its legal affairs reporting – might have been expected to care about.

Nor did anyone mention that just a few months ago, the Center for Disease Control and Prevention was explicitly advising against a general mask-wearing regime, as was Anthony Fauci, the High Priest of COVID19.

No, facts would only have complicated matters. After all, we already knew what good little boys and girls were expected to do with those muzzles. At the close of each weather forecast, just in case anyone had missed the point, the reporter said cheerily, “And when you go out – put on a mask.” “And drink milk with every meal,” I half expected him to add, but I guess self-conscious condescension would have spoiled the effect.

Put on a mask.

In well over half a century, I cannot remember a weather report that ended with a brisk piece of non-meteorological advice, let alone a patently silly one – after all, if these magical masks were to make any difference, their greatest usefulness would have been at the beginning of the outbreak, not on its heels.

Yet throughout March, while police-state fever prompted the suspension of democracy in some 40 states and most of the US population was being hustled into virtual house arrest, the pro-incarceration crowd’s loudest voices unanimously insisted that masks were of no practical value.

For anyone who has forgotten, Fauci told 60 Minutes that:

[t]here’s no reason to be walking around with a mask. When you’re in the middle of an outbreak, wearing a mask might make people feel a little better and it might even block a droplet, but it’s not providing the perfect protection that people think it is. And often there are unintended consequences – people keep fiddling with the mask and they keep touching their face.”

That was how things stood when the epidemic was new and all stops were out. And now? Contemplating the lockdown-lovers’ belated fetish for surgical gear, one can only imagine the US Navy ceremoniously issuing an air-raid warning at Pearl Harbor a hundred days or so after the Japanese attack had wiped out much of the fleet.

Fortunately, where I live people don’t care whether you wear a mask or not, although it’s state law at the moment. The area is pretty laid back all the way around here in south-central Ohio. The last time I was in our local Walmart, about 2/3 were wearing masks and 1/3 were not (me included), but the masked people would joke and speak with us no-maskers with no problem. Even some of the elderly (75+ yrs old, I’d say) were maskless. We are a pretty independent lot, thank God, and most of us only fear what we should, which doesn’t… Read more »

I live in Ohio and the “masking up” is a Mandate/Order….NOT a Law. As of today, masks are required in counties at Code Level 3. That may change tomorrow but Governors cannot make laws. Lawmaking is created from Bills approved by our Ohio Legislature which becomes an Act. An Act only becomes Law after the Governor signs or no action taken after 10 days.

In addition to my comment above, a reason why some call it a law is because the Legislature handed over authority (by Law) to the Governor to issue this policy/decree on their behalf through the department of health, but it’s not Constitutional and this back door approach needs to be readdressed. There is no (Law), on the books, that states you must wear a mask.

The Orange and Seminole Counties here in Fl are under “mandatory” wear your face diaper orders. But I just got back from grocery shopping with NO face diaper at two Wal-marts (went to the Wal-marts just to prove I can wonder around mask-less) and my local Publix in the Orlando area. EVERYONE was masked-up. Loved the stares and frowns from the lemmings. Time to show the pearl-clutching power-hungry a## clown bureaucrats we don’t give a rat’s rear for their orders.

So true, this afternoon I was driving through our small community in Fairfield, Iowa And I passed a man by himself out for an afternoon walk wearing a mask. To make matters worse our county (16,000 pop.) has had 84 confirmed cases and ZERO deaths. The chances of catching the virus here in a crowed grocery are nil, but, out for a walk in a small community with no one around is close to, if not, impossible. I wanted to tell how ridiculous this behavior was when I realized that anyone that far gone is a hopeless case,