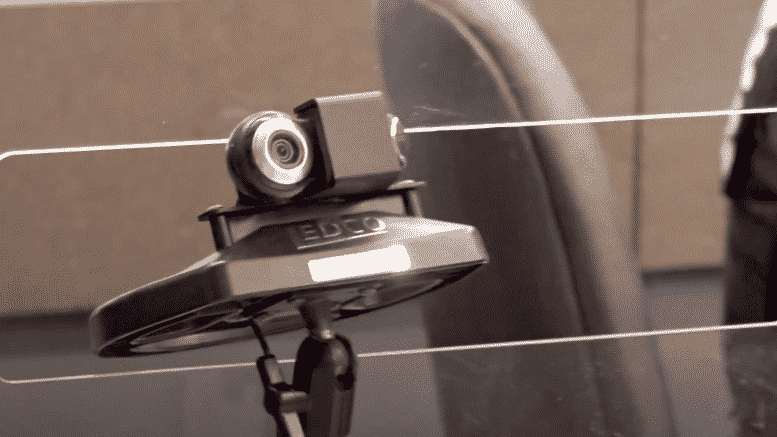 Please Share This Story!
PDF 📄
The Federal government is driven to build a comprehensive biometric database on all Americans and has used the Great Panic of 2020 (COVID) to accelerate its efforts, all in the name of making citizen feel safe. ⁃ TN Editor

A recent DHS report titled the “CBP Trade and Travel Report” reads like an instruction manual on how to exploit the public’s fear of COVID. The report is a perfect example of how the Feds used the pandemic as an excuse to install facial recognition cameras across the country.

The report starts out by claiming that the U.S. Customs and Border Protection (CBP) faced serious hardships because of the coronavirus epidemic.

When other organizations had a decrease in business, they laid off or furloughed their employees as a result. What did Homeland Security do? They, instead, decided to increase biometric surveillance of everyone.

The CBP has used the pandemic to embark on “transformative biometric measures” to enroll more Americans into their “Trusted Traveler” database.

“In FY2020, CBP enrolled 376,000 new members into one of the four Trusted Traveler programs: Global Entry, NEXUS, SENTRI or FAST. More than 9.6 million members enjoyed the benefits of expedited processing as a Trusted Traveler in FY2020.”

The CBP’s biometric Trusted Traveler program is now being used in 76 airports.

“The majority of Trusted Travelers in FY2020, over 7.1 million, are members of CBP’s flagship program, Global Entry. Global Entry members have access to automated kiosks at 76 U.S. airport and 15 Preclearance locations.”

The Feds have successfully used the pandemic to expand their biometric database of U.S. air travelers.

“Additionally, in FY2020, CBP expanded the use of Simplified Arrival, a process that quickly and reliably verifies a traveler’s identity biometrically and retrieves traveler records from CBP systems using the traveler’s face. This eliminates time-consuming steps for most travelers, such as document scans and fingerprint captures, and speeds up the inspection process. Simplified Arrival is the first step in re-envisioning how travelers arrive in the United States.”

In two years, the CBP’s Global Entry Facial Comparison program has expanded to 20 international airports in the U.S.

A recent Homeland Security S & T press release boasted that the Feds now have the ability to ID airline passengers wearing masks 77%-96% of the time.

“It is official, unless airline passengers are willing to wear motorcycle helmets or Daft Punk style masks, the Feds can use facial and Iris recognition to identify nearly everyone. According to the NIST report it does not matter if a mask covers most of a persons face or the type[s] of masks people wear.”

The CBP has used the pandemic to double their facial recognition database.

The reasons the CBP uses facial recognition to ID every airline passenger, borders on the absurd. (Pun intended.)

Since 2018, the CBP has used facial recognition to ID a grand total of 7 imposters who tried getting into the United States. The CBP also claims to have identified 285 imposters on arrival in the land pedestrian environment. (Mexico border.)

The CBP absurdly claims that “facial recognition in air and sea travel promotes social distancing while increasing the safety of travelers, CBP officers, and port personnel.”

Claiming that facial recognition “promotes social distancing and increases the safety of travelers” might just be one of the most preposterous excuses I have ever heard anyone use to justify creating a national biometric database.