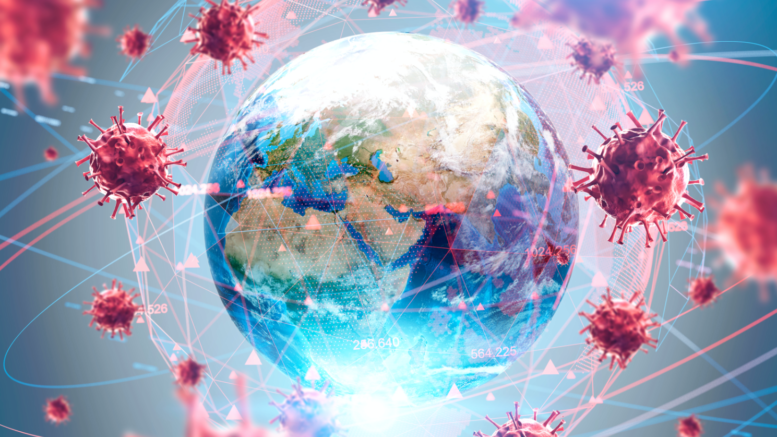 Please Share This Story!
PDF 📄
COVID-19 is just the beginning of a never-ending series of bio-tyranny events that will pound citizens of the world into complete submission and subservience. The threats themselves are not so much the problems but their response to them is. Technocrats are dedicated to the “science of social engineering”. ⁃ TN Editor

For the more than a year now, the world’s focus has been squarely on the COVID-19 pandemic. With over 100 million confirmed cases worldwide and more than two million dead from the virus, it’s hard to imagine how things could get worse. Despite this, a team of experts is already preparing for the next global crisis; warning that some of the possibilities would be more devastating than the current pandemic.

Starting during the summer of 2019, an international team of researchers set out to list the key questions facing the United Kingdom’s biological security. With help from the Centre for Existential Risk (CSER) at the University of Cambridge and the BioRISC project at St. Catharine’s College, 41 academics, industry, and government officials laid out 450 questions regarding a possible biological crisis.

After voting and ranking all of these concerns, a list of 80 of the most urgent questions emerged. Despite compiling this list months before COVID-19, lead researcher Dr. Luke Kemp says this list included major concerns revolving around disease threats. Some of the concerns focused on what role the climate will play on a possible pandemic, while others questioned the use of social media to track emerging viruses.

Is a biological threat worse than coronavirus coming?

Some of the 80 concerns look at an even more sinister possibility on the horizon. As DNA testing becomes a more fashionable tool for both governments and everyday people, researchers warn that threats from “human-engineered agents” pose a huge threat to the entire world.

“We could encounter not just microbes, but anything from brain-altering bioweapons, to mass surveillance through DNA databases to low-carbon clothes produced by microorganisms,” Dr. Kemp says in a university release.

“While many of these may seem to lie in the realm of science fiction, such advanced capabilities could prove to be even more impactful, for better or for worse than the current pandemic.”

This study actually originated from an earlier “horizon scan” by Kemp and some of the same researchers which focused on the future of bioengineering.

That report, published in the summer of 2020, ranked the 20 most pressing questions in the field of bio-research. Study authors also separated the list from the most immediate concerns (likely to occur within five years), to issues five to 10 years away, to those more than a decade from being a reality. Although some of the topics may be beneficial to mankind, Kemp notes that the list ranges from “promising to the petrifying.”

One of the most distressing topics appearing on both lists is the immediate concern of DNA’s use in government surveillance.

“China has already used blood sampling to target the Muslim Uighur population. Commercial DNA databases have become popular and may become the next frontier of ‘Surveillance Capitalism’ or state surveillance,” Kemp reports.

“The possibility of using genetic databases for mass surveillance will only grow in coming years, particularly with the rise of new tracking and monitoring methods, powers and apps during the COVID-19 response.”

Also high on the list of future threats is the malicious use of neurochemistry. The experts argue that advances in neuroscience and bioengineering will not only produce helpful medications, but also weapons.

“Imagine a world in which law enforcement uses drugs to placate and control crowds, greatly diminishing the promise of non-violent protest movements on climate and social justice,” the lead researcher adds. “Regulation is critical at both the international and national level. We need to ensure that new insights into the human brain are not weaponized for either the army or police-force“.

As some of us have figured out by now. Covid19 apart from being a biological weapon is nothing more than a respiratory illness. The main thing that’s prolonging the insanity of despots regarding cv19 are people who live in fear and ignorance continually listening to the rhetoric of NWO mainstream news mouthpieces. I know some folks with health issues who are more than willing to risk more sickness, disease or even death by taking the cv19 vaccine. These folks won’t even try to find doctors who could possibly get them healed and off the medications they already live with from… Read more »

I wish we’d quit affirming their lies about the Covaids. It isn’t true to say there are 100 million “cases” (a meaningless term to begin with – what we actually should care about with respect to a disease are infections and deaths) as all this is based upon the fraudulent PCR test. A test, whose own creator, Kary Mullis explains can find anything in anyone (with enough cycles). We should therefore not care about deaths, as these deaths also rely on the same fraudulent PCR test. Furthermore, until they can demonstrate that their alleged virus satisfies Koch’s Postulates, and does… Read more »

Even if we are to believe our politicians have our best interests at heart (which is difficult by itself), we find them acting like frightened, overprotective parents. They’re afraid their children will get hurt so they put policies in place to stop anything that might cause us pain, failing to realize that (1) such policies of ‘safety’ can never end once started because almost anything can cause an existential crisis, (2) this will destroy any resilience for facing future threats. So, like such a parent, their own policies have become worse than the external threat.

It’s all part of the One Health Approach!