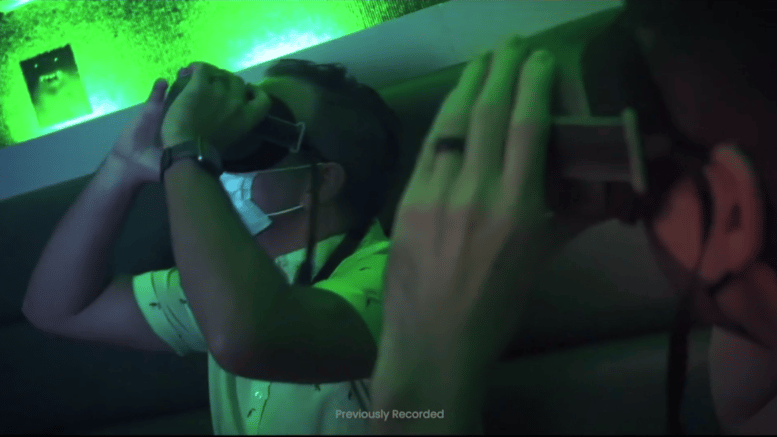 Please Share This Story!
PDF 📄
Disney is looking to transform its entertainment business, including its theme parks, into a fully immersive, experiential dive into the Metaverse. This will recast the entertainment industry by blending fantasy with reality. This will entice a generation of youth to live in the Metaverse. ⁃ TN Editor

Bob Chapek won’t talk about whether an Encanto sequel is coming or not, but the Disney CEO makes it clear he has some very big plans for the company as it heads into its 100th anniversary in 2023.

“We call it next-gen storytelling,” Chapek said backstage at the D23 Expo in Anaheim on Saturday about what has been called Disney’s metaverse future by the man himself in a memo earlier this year. “We tend not to use the M word too often, because it has a lot of hair on it,” the enthusiastic exec adds mere minutes after the sprawling Lucasfilm and Marvel presentations had concluded at the confab.

“But yes, Disney+ will not just be a movie service platform, but it’s going to become an experiential lifestyle platform. A platform for the whole company to embody both the physical things that you might be able to experience in a theme park, but also the digital experiences that you can get through media.”

While talk of Disney’s next step has been in the ether for several months (and ex-SVP of consumer experiences and platforms Mike White was promoted to run point on the initiative), Chapek has mostly been quiet publicly about the true scope and scale of the company’s next big move until now.

More than 30 months after being named as CEO, Chapek has weathered the slings, arrows and near-empty coffers of the pandemic, some hard decisions, some disruptive decisions to put it mildly, and more than one political trial by fire. Having inked a new contract in June, he now finds himself overseeing a healthy stock, surging theme-park attendance, a greater than expected streaming subscriber base, a full pipeline of content across the board and a lot of cash on hand.

Leaning into Disney’s big celebration next year, Chapek today outlined where he wants to see the company go over the next decade or so. Talking with Deadline, the longtime House of Mouse employee also laid out some of his cards when it comes to the importance of ESPN and sports to the Disney empire, the future of Hulu, and the next big challenge for the entertainment industry.

DEADLINE: D23 is the kickoff to Disney’s 100th anniversary, a fact you were clearly pumped about on stage yesterday. So, what does that mean to you as the CEO right now?

CHAPEK: First of all, to work at the Walt Disney Company is a privilege in any capacity, but to be here 30 years and to be given the opportunity to run this company is a pinch-me sort of life experience.

CHAPEK: Yes. Sometimes I still have to ask myself, am I really here doing this? But then you add in the third dimension, which is you’re doing this at the time where the company turns 100. And I say to my staff all the time: Do we all realize we happen to be at, in our opinion, the greatest company in the world at a time where we’re going to be able to celebrate the 100th anniversary?

It’s an alignment of the stars, and I feel like I’m the luckiest person on Earth to be able to be here. But it’s also tremendous responsibility because I’m seeing this as our opportunity to advance the company to celebrate what made this company what it is and the legacy of it all. We do appreciate the past, but we also know that we don’t want to become dinosaurs.

DEADLINE:When you were speaking at the Legends ceremony on Friday, you dropped a little bit more of what seemed like a serious next phase for the Walt Disney Company. You said Disney+ and some of your other platforms, we are going to make things interactive. This has been floating around for a while — you even brought Mike White on board to facilitate it — but is the metaverse the future of Disney?

CHAPEK: (laughs) We call it next-gen storytelling. We tend not to use the M word too often, because it has a lot of hair on it. But yes, Disney+ will not just be a movie-service platform, but it’s going to become an experiential lifestyle platform. A platform for the whole company to embody both the physical things that you might be able to experience in a theme park, but also the digital experiences that you can get through media.

Not surprising at all. Disney has been trying to dominate the film markets for their own films and also the Marvel and DC Universes. Disney Corp. has had much success in spreading their occult and considerably satanic messages in children’s films and others seeming so innocent to parents. The grand deception was exposed by Florida governor Ron DeSantos, who has pledged to get to the heart of the Disney deception!

Speaking of Disney, Dayz of Noah on youtube recently reported a on new animated TV program for kids that’s offered by Disney. No joke, the storyline involves a woman who practices in the occult who is impregnated by Satan with the Antichrist shown on the program as a young child. Dayz of Noah showed screenshots of the program. Very disturbing

Disney was listed as one of the 13 satanic families by Fritz Spreigmeir on the forbidden knowledge web site before it was taken down. I think I spelled Fritz’s last name wrong. I’ve seen and heard enough satanic leanings of that organization to ignore anything they bring forth from this point on. People who know how to spot satanic symbolism have stated that even the Wizard Of Oz contains such content.

Cult-Owned Disney Eyes Domination Of The Metaverse - All View News

[…] Disney Eyes Domination Of The Metaverse […]