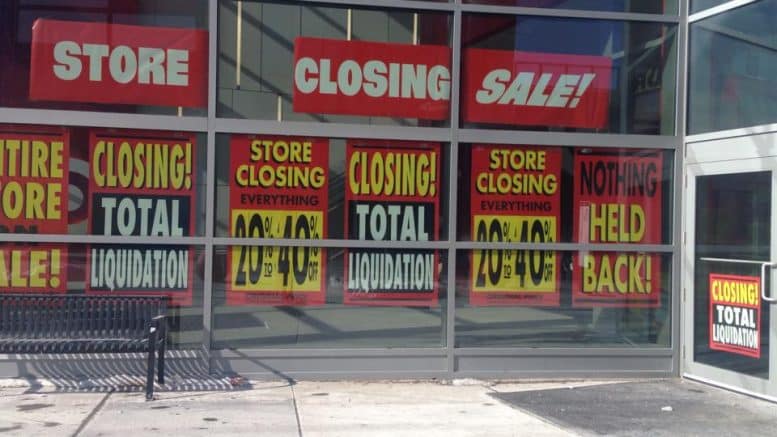 Disruption is the most prominent meme in 2018, as evidenced by retail carnage at all levels. Should the Internet also suffer disruption in the future, the retail infrastructure will be found to be missing. In the meantime, jobs will be shed in record numbers. ⁃ TN Editor

Retailers are bracing for a fresh wave of store closings in 2018 that is expected to eclipse the rash of closings that rocked the industry last year.

“Landlords are panicking,” said Larry Perkins, the CEO and founder of the advisory firm SierraConstellation Partners. “The last year was pretty apocalyptic from a retail standpoint, and the macro issues haven’t changed. There will continue to be a high degree of bankruptcies and store closures.”

2017 was a record year for both store closings and retail bankruptcies. Dozens of retailers including Macy’s, Sears, and J.C. Penney shuttered an estimated 9,000 stores — far exceeding recessionary levels — and 50 chains filed for bankruptcy.

But there’s still a glut of retail space in the US, and the fallout is far from over.

The number of store closings in the US is expected to jump at least 33% to more than 12,000 in 2018, and another 25 major retailers could file for bankruptcy, according to estimates by the commercial real estate firm Cushman & Wakefield.

Many more announcements on closures and bankruptcies are expected in the coming months.

The start of the year is a popular time to announce store closings and bankruptcies because retailers are typically flush with cash after the busy holiday season — and closing stores and filing for bankruptcy are costly.

Among the companies most likely to file for bankruptcy within the next year are Sears, Bon-Ton Stores, Bebe Stores, Destination Maternity Corp., and Stein Mart, according to S&P Global Market Intelligence.

Mass store closings will force shopping malls out of business

When combined with last year’s record-high store closings, an even higher rate of closings in 2018 would push hundreds of low-performing shopping malls to the brink of death.

We are destroying our of social fabric for the “easy” life. Convenience is not always good and now threatens to enslave us all with IoT. Progress may now be called an oxymoron as very little of it is good for anyone or anything except for just a few people who have no conscience that, as Bernay’s stated, believe the rest of us to be nothing but animals with rarely an original idea in our lifetimes.