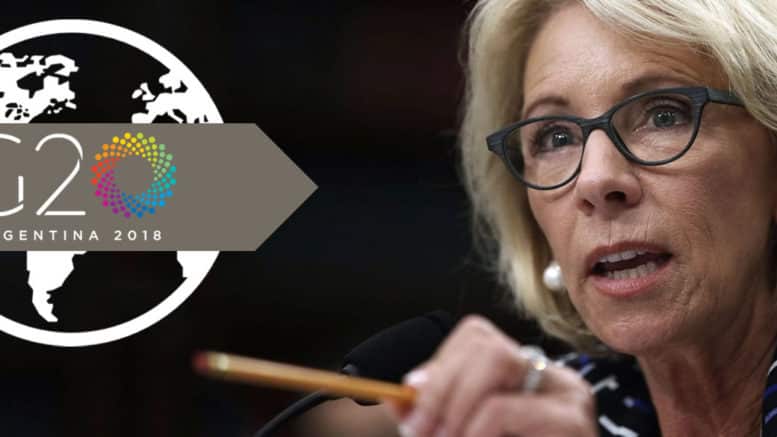 Please Share This Story!
PDF 📄
Technocracy’s reach into the Trump Administration is deep and wide. The promise of dumping Common Core Education Standards and returning control to the states, has been abandoned in favor of piping directly into the United Nations globalist agenda, which is Sustainable Development, aka Technocracy. ⁃ TN Editor

U.S. Education Secretary Betsy DeVos signed on to a radical global “declaration” that calls for, among other absurdities, brainwashing children to believe in the United Nations-backed ideology of total government known as “‘sustainable development.” In fact, the pseudo-treaty inked by Trump’s education chief suggests that the purpose of schooling is to indoctrinate children with the right “values” and teach them to be obedient worker drones.

Under the un-American vision agreed to last week in Argentina, the governments purported to commit their nations to globalized brainwashing under the guise of “education.” To be clear, this is a dangerous policy document that, if implemented, will contribute to finalizing the destruction of traditional education in America and replacing it with a total indoctrination program aligned with the systems of some of the world’s most murderous autocracies. Americans should be outraged.

The declaration, produced at the first ever “Education Working Group” of the Group of 20 (G20) network of governments and dictatorships, was titled “‘Building consensus for fair and sustainable development.” How free nations can build “consensus” on “education” with murderous Islamist and Communist regimes that indoctrinate all children under their rule with evil ideologies of oppression was not made clear.

The whole education vision signed by the 20 governments and tyrants revolves around the United Nations Agenda 2030 Sustainable Development Goals. This extremist document, which demands national and international wealth redistribution as well as brainwashing of all children, is basically a road-map to global totalitarianism. It was literally developed by mass-murdering dictatorships. But it has never ratified by the U.S. Senate, as required by the Constitution of treaties.

The G20 education document is wild in terms of what it openly promotes. “Education is the foundation of personal development as it provides children, youth and adults with the knowledge, skills, values and attitudes necessary to reach their full potential,” declared the education ministers (emphasis added), including some whose regimes torture and slaughter opponents of communism or sharia law.

They also demanded more data-gathering and -mining. “We recognize the value of policies based on evidence and the importance of having robust and comprehensive learning assessment systems and data in order to measure progress and learning outcomes, to help ensure quality education for all at all stages of life,” the document says, one of many references to government-provided “education” from cradle to grave informed by perpetual, Orwellian vacuuming up of student data.

The agreement also demands further globalization of education, a process that has been underway for many years. For instance, it calls for “international investment in education,” a theme consistent with the ongoing globalization of education under the UN’s extremist “education” agency known as UNESCO. “We acknowledge the role of existing and potential international mechanisms for financing education,” the document continues.

They also vowed to push it further. “We commit to strengthening international cooperation… and developing joint initiatives at bilateral, regional and multilateral levels,” the mostly unelected education czars said. In fact, the document goes on to say it explicitly: “We commit to facilitating the internationalization of education.” That means education policy for American children, decided by foreign governments and tyrants, as well as dictator clubs such as the UN.

The signers, including DeVos, agreed to “promote the development of curricula … which have a strong focus on … values and attitudes.” They also committed to “foster the inclusion of non-cognitive skills such as socio-emotional skills across the curriculum,” which is basically educrat psycho-babble to conceal a program of psychological conditioning aiming to bring about the values and attitudes demanded by the establishment in all children.

Finally, the education chiefs vowed to “provide education that supports better integration of common values like … sustainable development.” As far as the nebulous, totalitarian concept relates to education, the UN has already made clear that it considers real education and educated people a threat to its grotesque notions of “sustainability.”

The declaration also undermines true human rights — free speech, freedom of the press, gun rights, and other God-given rights — and promotes the communist-inspired notion of government-granted privileges as rights. “We stress that access to quality education is a human right,” the education ministers declared, as if mass-murdering communist tyrants had the same vision of “quality education” as liberty-minded Christian parents in America.

Common Core Diva Lynne Taylor, a respected education researcher, was among the voices sounding the alarm. “DeVos’s global roots are showing, as they have been since she was sworn into office. The question is exactly what will she do with all the ideas, policies, and, the damning Declaration for not only education, but our very freedoms,” Taylor warned. “I can tell you we all need to brace for impact.”

Trump should fire DeVos — and not just for participating in this dangerous effort to further globalize education and standardize the indoctrination of children worldwide. But rather than replacing her, Trump should work with Congress to shut down the entire unconstitutional department and get the feds completely out of education. The alternative is the continued subversion of education in America — and ultimately, the death of freedom.