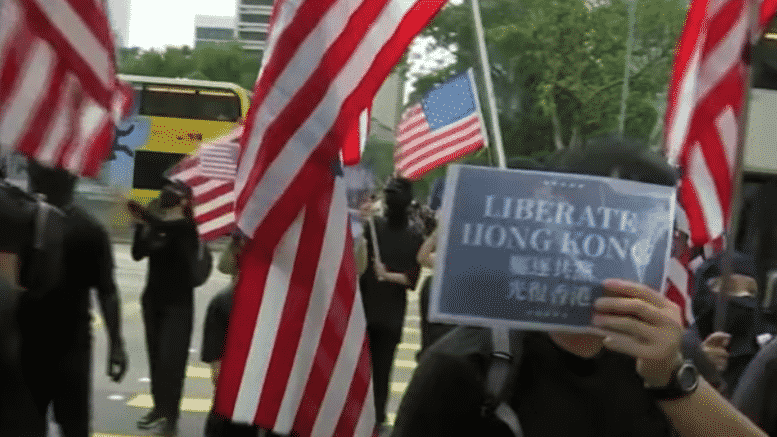 Please Share This Story!
PDF 📄
Entanglement with China has allowed it to pressure the West to bow to its demands for censorship and accept its aggressive oppression of Hong Kong protestors.

Meanwhile, protestors in Hong Kong are waving American flags, singing our national anthem and begging for Western support to help throw off the yoke of Technocrat oppression. ⁃ TN Editor

The Brooklyn Nets’ new billionaire owner, Joseph Tsai, slammed Morey in a Facebook post Sunday night. Tsai, the co-founder of Chinese internet titan Alibaba, described Morey’s tweet as “so damaging to the relationship with our fans in China,” adding that “the hurt that this incident has caused will take a long time to repair.”

China Daily, the communist government’s propaganda arm, used the NBA’s conciliatory reaction to warn other companies to learn “a lesson: The big Chinese market is open to the world, but those who challenge China’s core interests and hurt Chinese people’s feelings cannot make any profit from it.”

The NBA isn’t alone in bowing to communist China.

American universities have allowed the Chinese government to fund centers called Confucius Institutes that provide the communist regime with avenues to infuse pro-China propaganda into American academia. Eighty-nine Confucius Institutes were operating in the U.S. as of September 2019, according to the National Association of Scholars.

Hollywood has self-censored for years in order to ensure access to the Chinese market. The U.S. government published a report in 2015 detailing how filmmakers tailor their messaging to appease Chinese audiences and—more importantly—Chinese government censors.

“For a type of movie, particularly the global blockbusters, they are not going to go and make something that the Chinese would reject for social or political reasons,” Peter Shiao, the CEO of an “independent Hollywood-Chinese coproduction studio,” told the commission.

MGM Studios digitally altered the 2012 remake of “Red Dawn” to change the invading army’s nationality from Chinese—as was the case during filming—to North Korean.

The Walt Disney Company threatened to boycott Georgia in May if a pro-life law took effect, even though the company apparently has no issue doing business with the Chinese regime, which is a notorious human rights violator. (RELATED: IHOP Boycotts Tucker Carlson But Not Saudi Arabia)

Apologizing to China? Are they insane? NO. They are profiteers. Their God is MONEY. These Western corporations have been making very silent profits out of China for a very long time. Hell, Texas Instruments, a Dallas, TX born and bred company formed in the 60’s holds center stage in the remade Chinese showcased city of Tianfu. Western corporations would not give a fig for such ridiculous actions as Tweeting retractions to a Communist regime if they were not profiting from doing so. They are. So, China is great now because the Technocrats are eyeball-deep in profits and the exchange of… Read more »