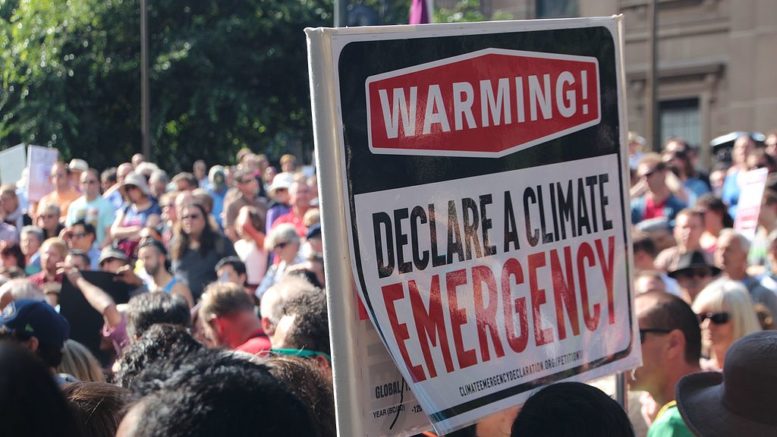 Please Share This Story!
PDF 📄
The entire world, including  the EU,  is caving in to the climate emergency scam, in preparation for an economic reset that will make way for full-blown Technocracy to replace Capitalism and Free Enterprise. ⁃ TN Editor

EU should commit to net-zero greenhouse gas emissions by 2050 at the UN Conference, says Parliament.

Ahead of the UN COP25 Climate Change Conference in Madrid 2-13 December, the Parliament on Thursday approved a resolution declaring a climate and environmental emergency in Europe and globally. They also want the Commission to ensure that all relevant legislative and budgetary proposals are fully aligned with the objective of limiting global warming to under 1.5 °C.

In a separate resolution, Parliament urges the EU to submit its strategy to reach climate neutrality as soon as possible, and by 2050 at the latest, to the UN Convention on Climate Change. MEPs also call on the new European Commission President Ursula von der Leyen to include a 55% reduction target of greenhouse gas emissions by 2030 in the European Green Deal.

Step up global emission reductions for aviation and shipping

MEPs say that current aviation and shipping ambitions fall short of the necessary emissions reductions. All countries should include emissions from international shipping and aviation in their national contributions plans (NDCs), they say, and urge the Commission to

propose that the maritime sector be included in the EU’s Emissions Trading System (ETS).

EU countries should at least double their contributions to the international Green Climate Fund, Parliament says. EU member states are the largest providers of public climate finance and the EU’s budget should fully comply with its international commitments. They also note that pledges by developed countries do not meet the collective goal of 100 billion USD per year as of 2020.

Finally, they urgently call on all EU countries to phase out all direct and indirect fossil fuel subsidies by 2020.

“The European Parliament has just adopted an ambitious position in view of the upcoming COP 25 in Madrid. Given the climate and environmental emergency, it is essential to reduce our greenhouse gas emissions by 55% in 2030. It also sends a clear and timely message to the Commission a few weeks before the publication of the Communication on the Green Deal “”, said Pascal Canfin (RE, FR), Chair of the Committee on the Environment, Public Health and Food Safety, during the debate on Monday.

A number of countries, local administrations and scientists have declared that our planet is facing a climate emergency.

The European Commission has already proposed the goal of net-zero emissions by 2050, but the European Council has still not endorsed it as Poland, Hungary and Czechia are opposed.

Parliament at the COP25