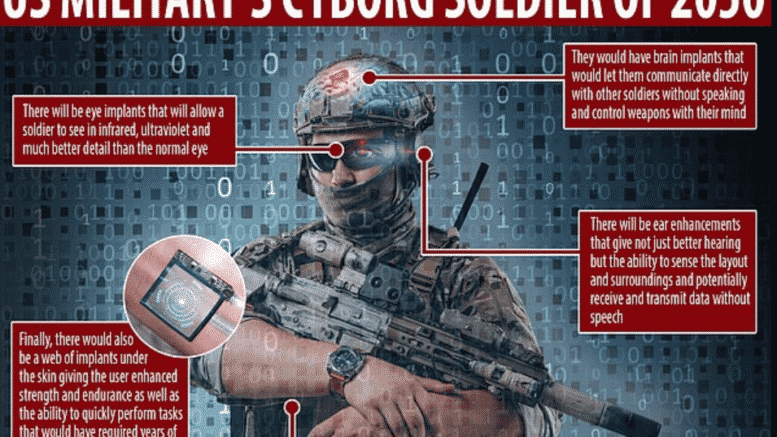 Future armies could be made up of half-human half-machine cyborgs with infrared sight, ultrasonic hearing and super-human strength, equipped with mind-controlled weapons.

In a US Army report, experts from Devcom – the Combat Capabilities Development Command – outlined a number of possible future technologies that could be used to enhance soldiers on the battlefield by 2050.

These include enhanced limbs for increased strength, an eye that provides infrared and ultraviolet vision, and an audio device that provides ultra- and subsonic hearing.

They also suggest a future soldier could have a neural device that optimises brain power and allow them to control weapons with their mind.

The ‘thought experiment’ involved dozens of scientists, military personnel, ethicists and other experts discussing future technologies, what impact cyborgs would have on society and how it would change warfare.

The term ‘cyborg’ was first coined in a NASA study on the long-term impact of space study by Manfred Clynes and Nathan Cline.

The word is a portmanteau formed from cybernetic organism and is an organism that has been optimised by creating interactions between flesh and machine.

The study involved breaking down the future design of a cyborg soldier into the main areas of enhancement likely to be possible by 2050.

They examined changes to the eyes, ears, brain and muscular system through four ‘case studies’ examining the different technologies that could be developed and what impact they would have on society and warfare.

The study predicted that human machine enhancements would become widely available before 2050 and likely be led by medical use rather than the military.

‘The healthcare market will fuel human machine enhancements primarily to augment the loss of functionality from injury or disease’, the report claims.

Devcon suggests that as well as being better fighters, enhancing soldiers with technology could improve their chance of survival if hit during battle.

‘One could argue that failure to invest in responsible development of these potentially lifesaving technologies would be unethical.’

Authors of the report suggest that a lot of work would need to be done on changing ‘hearts and minds’ to make people more receptive of adapted soldiers, especially after they return to civilian life.

They say that an individual re-entering civilian life with enhanced abilities would have a defined competitive advantage over non-enhanced individuals.

The team questioned whether soldiers with enhancements should be ‘throttled’ back to a normal level when entering society and if so what normal levels should be.

One participant in the study said: ‘If I can’t walk into a sensitive compartmented information facility wearing an iWatch or carrying a cellphone, how will security be confident it is safe to allow a cyborg to walk in there?’

This was just a thought experiment and we are unlikely to see an ‘enhanced soldier’ with all of these changes by 2050, however there is some suggestion in the report that part, if not all of the technologies could be fairly common within 30 years.