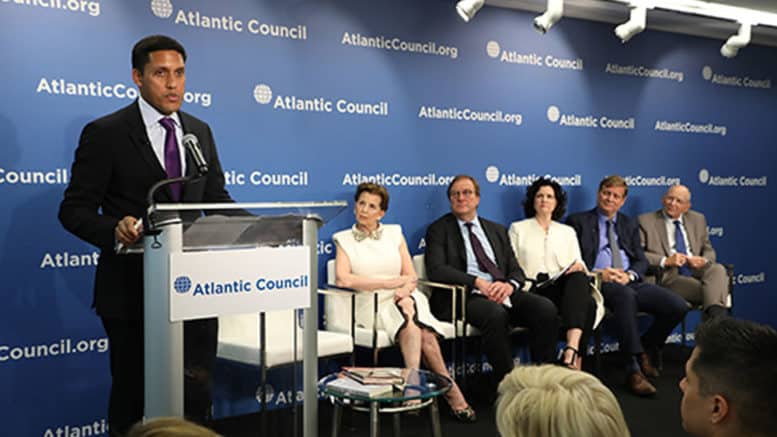 Please Share This Story!
PDF 📄
The Atlantic Council has been connected to the impeachment inquiry through a common contact with Burisma Holdings and the supposed whistleblower, Eric Ciaramella. The Council’s board is riddled with members of the Trilateral Commission.

The Atlantic Council has been closely linked to the Trilateral Commission since its founding in 1973 by David Rockefeller and Zbigniew Brzezinski. There have always been a preponderance of Commission members on the Council’s Board of Directors. Some prominent and recognizable names include Michael Chertoff, Paula J. Dobriansky, Wolfgang Ischinger, Henry Kissinger, Joseph Nye, Rajiv Shah (President of the Rockefeller Foundation, and Wendy Sherman, among others.

The Trilateral Commission is the locus of the ‘deep state’ and has always managed to fly under the radar of scrutiny. Wherever and whenever Commission members pop up, you can be sure you are close to the center of globalization. ⁃ TN Editor

A second staffer for Representative Adam Schiff (D-Calif.), chairman of the House Intelligence Committee, has been discovered to have ties to the Atlantic Council, a think tank that receives funding from and works in partnership with Burisma Holdings, the Ukrainian natural gas company whose relationship with Hunter and Joe Biden forms the basis of the current impeachment probe into President Trump.

The staffer, Sean Misko, reportedly joined Schiff’s staff at the House Intelligence Committee in August — the same month that the whistleblower’s complaint was filed after first reportedly interfacing with a Schiff staffer.

Misko has been described as being “close friends” with Eric Ciaramella, the CIA operative believed to be the whistleblower.

In 2015, Misko was a yearlong “Millenium Fellow” at the Burisma-financed Atlantic Council, making him the second Schiff staffer who has worked or currently works for the think tank.

The other staffer, Thomas Eager, is presently a fellow at the Atlantic Council’s Eurasia Congressional Fellowship, a program that the organization’s website says “educates congressional staff on current events in the Eurasia region.”

In 2017, Burisma signed a “cooperative agreement” with the Council specifically to sponsor the Eurasia Center where Eager is a fellow.

Eager has maintained a close relationship with the Atlantic Council, writing Ukraine policy pieces with the think tank’s director and articles published by the Council’s publications.

According to Breitbart, Eager took an Atlantic Council-organized trip to Ukraine in August during which he held a meeting with Acting U.S. Ambassador to Ukraine Bill Taylor, who is a key witness in Democrats’ impeachment probe.

That trip “culminated in a meeting with former Ukrainian President Petro Poroshenko,” the man whom former Vice President Joe Biden convinced to fire prosecutor Victor Shokin (who was investigating Burisma) on threat of withholding $1 billion in U.S. loan guarantees.

In addition to being a member of the Atlantic Council, Misko has been a donor to the think tank, giving $999 in 2016.

Founded in 1961, the Washington, D.C.-based Atlantic Council is similar to the globalist Council on Foreign Relations — a mechanism by which the globalist establishment staffs key positions in government and influences decision-makers. The Council was founded with the goal of fostering greater integration between North America and Europe.

Burisma is far from the only eyebrow-raising source of funding for the Atlantic Council. Other financing groups from the world of the globalist elite include the Rockefeller Foundation, Google, and George Soros’ Open Society Foundations.

Another donor: Perkins Coie, the law firm that represented both the Hillary Clinton campaign and the Democratic National Committee (DNC) and that reportedly helped enlist the help of the firm CrowdStrike with the DNC’s server, which was allegedly hacked.

The Washington Examiner reported that Misko is “close friends” with Erica Ciaramella and shares a “bro-like” relationship with him.