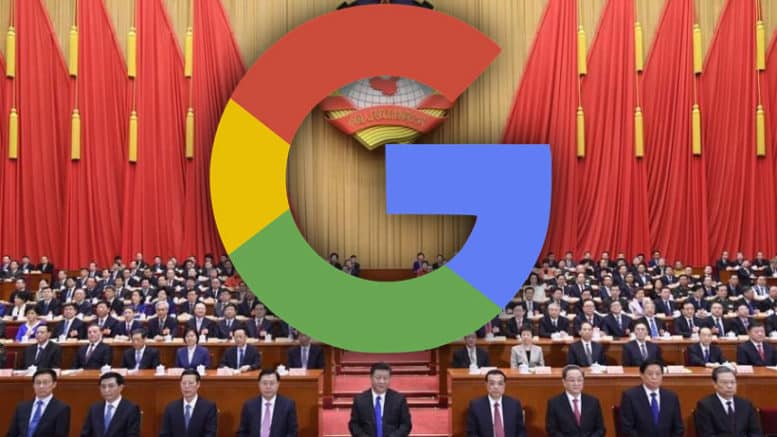 Technocrat birds of a feather flock together but take urgent warning here: If Google bows to autocratic China to censor its citizens, it will bow to any government to do the same. In fact, the censorship engine is already built and tested and effectively weaponizes the Internet against the people of the world. ⁃ TN Editor

Google is planning to launch a censored version of its search engine in China that will blacklist websites and search terms about human rights, democracy, religion, and peaceful protest, The Intercept can reveal.

The project – code-named Dragonfly – has been underway since spring of last year, and accelerated following a December 2017 meeting between Google’s CEO Sundar Pichai and a top Chinese government official, according to internal Google documents and people familiar with the plans.

Teams of programmers and engineers at Google have created a custom Android app, different versions of which have been named “Maotai” and “Longfei.” The app has already been demonstrated to the Chinese government; the finalized version could be launched in the next six to nine months, pending approval from Chinese officials.

The planned move represents a dramatic shift in Google’s policy on China and will mark the first time in almost a decade that the internet giant has operated its search engine in the country.

Google’s search service cannot currently be accessed by most internet users in China because it is blocked by the country’s so-called Great Firewall. The app Google is building for China will comply with the country’s strict censorship laws, restricting access to content that Xi Jinping’s Communist Party regime deems unfavorable.

The Chinese government blocks information on the internet about political opponents, free speech, sex, news, and academic studies. It bans websites about the 1989 Tiananmen Square massacre, for instance, and references to “anticommunism” and “dissidents.” Mentions of books that negatively portray authoritarian governments, like George Orwell’s 1984 and Animal Farm, have been prohibitedon Weibo, a Chinese social media website. The country also censors popular Western social media sites like Instagram, Facebook, and Twitter, as well as American news organizations such as the New York Times and the Wall Street Journal.

Documents seen by The Intercept, marked “Google confidential,” say that Google’s Chinese search app will automatically identify and filter websites blocked by the Great Firewall. When a person carries out a search, banned websites will be removed from the first page of results, and a disclaimer will be displayed stating that “some results may have been removed due to statutory requirements.” Examples cited in the documents of websites that will be subject to the censorship include those of British news broadcaster BBC and the online encyclopedia Wikipedia.

The search app will also “blacklist sensitive queries” so that “no results will be shown” at all when people enter certain words or phrases, the documents state. The censorship will apply across the platform: Google’s image search, automatic spell check and suggested search features will incorporate the blacklists, meaning that they will not recommend people information or photographs the government has banned.

Within Google, knowledge about Dragonfly has been restricted to just a few hundred members of the internet giant’s 88,000-strong workforce, said a source with knowledge of the project. The source spoke to The Intercept on condition of anonymity, as they were not authorized to contact the media. The source said that they had moral and ethical concerns about Google’s role in the censorship, which is being planned by a handful of top executives and managers at the company with no public scrutiny.

“I’m against large companies and governments collaborating in the oppression of their people, and feel like transparency around what’s being done is in the public interest,” the source said, adding that they feared “what is done in China will become a template for many other nations.”

Patrick Poon, a Hong Kong-based researcher with human rights group Amnesty International, told The Intercept that Google’s decision to comply with the censorship would be “a big disaster for the information age.”

“This has very serious implications not just for China, but for all of us, for freedom of information and internet freedom,” said Poon. “It will set a terrible precedent for many other companies who are still trying to do business in China while maintaining the principles of not succumbing to China’s censorship. The biggest search engine in the world obeying the censorship in China is a victory for the Chinese government – it sends a signal that nobody will bother to challenge the censorship any more.”