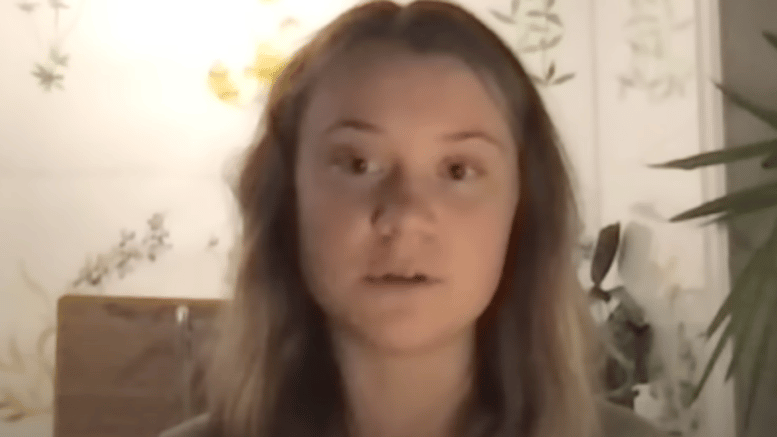 Please Share This Story!
PDF 📄
Greta Thunberg has moved past global warming and onto the main event: overthrowing capitalism altogether in favor of Sustainable Development, aka Technocracy. This has been the goal of global warming fear mongering from the very beginning of climate alarmism. Her handlers obviously understand the scam.

The only way to usher in Technocracy is to kill of its only enemies: capitalism and free market economics. Any subtle suggestions of this are now behind us. As Technocracy’s war on humanity progresses, calls for direct replacement will intensify to the point that people will beg for an end to Capitalism. ⁃ TN Editor

Climate activist Greta Thunberg has gone fully mask off and is now calling for the overthrow of “the whole capitalist system.”

Thunberg made the extremist comments during an appearance on Sunday night at London’s Royal Festival Hall to promote her new ‘Climate Book’.

Nicholas Harris from UnHerd was there to watch Thunberg outline her demented manifesto.

Previously, she’d sold herself as a five-foot human alarm bell, a climate Cassandra. Her role was to warn, not to instruct: her most viral moments involved her scolding political leaders, not trying to supplant them. She strenuously avoided programmatic detail, saying such things were “nothing to do with me”. But now, on stage and in this book, she has found her political feet, specifically the Left-wing ideology of anti-capitalism and de-growth.

Interspersed among the usual directives about the need to pressure political leaders, her message was more radical and more militant than it has been in the past. There is no “back to normal”, she told us. “Normal” was the “system” which gave us the climate crisis, a system of “colonialism, imperialism, oppression, genocide”, of “racist, oppressive extractionism”. Climate justice is part of all justice; you can’t have one without the others. We can’t trust the elites produced by this system to confront its flaws – that’s why she, much like Rishi Sunak, won’t be bothering with the COP meeting this year. COP itself is little more than a “scam” which facilitates “greenwashing, lying and cheating”. Only overthrow of “the whole capitalist system” will suffice.

So now we are finally seeing the contours of Thunbergism. Run your eye down the contributors to The Climate Book and you can see who she’s been reading: Jason Hickel, Kate Raworth, Naomi Klein. For these people the climate crisis isn’t man-made. It’s made by capitalism, as are the other forms of social injustice which plague society. There’s no GDP growth – especially of the capitalist sort – without increasing carbon emissions. The only solution to this state of emergency is for rich countries to immediately abandon economic expansion as a social goal.

As we have previously documented, the climate change agenda is merely radical leftism dressed up in a more palatable format.

The co-founder of Extinction Rebellion, the offshoot of which, Just Stop Oil, is currently engaged in blocking roads across London, admitted in his own words that his movement “isn’t about the climate.”

In 2019, Stuart Basden revealed the true goals of the far-left environmentalist action group in a lengthy article posted on Medium.

Basden asserted that whatever climate problems exist can’t be fixed and that the movement should instead be focused on tearing down the entire system of western capitalism (China, the world’s biggest polluter, isn’t mentioned once).

He claimed that “European civilisation” is to blame for spreading “cruelty” and “violence” throughout the globe for the last 600 years and bringing “torture, genocide, carnage and suffering to the ends of the earth.”

Basden then cited numerous “delusions” which are to blame for this situation, including “white supremacy,” “patriarchy” and “class hierarchy” (a strange one given that most Extinction Rebellion protesters are upper middle class snobs who do little but inconvenience and harm the working class).

“The delusions of hetero-sexism/heteronormativity propagate the idea that heterosexuality is ‘normal’ and that other expressions of sexuality are deviant,” writes Basden.

So there you have it, it isn’t about the climate, it’s about bringing down the west and replacing everything it stands for with a nightmare far-left form of identity politics-mad totalitarianism.

Capitolism isn’t the problem! Greed and Absolute Power has Corrupted Absolutely! And Greta is a uneducated ‘Puppet moron!

We can start with the people occupying the mansions of Gates, Soros, the Hollywierd Learjet leftists, Pelosi’s mansion, etc. Just like the communists want. Oh yeah. The Black Book of Communism, Harvard Univ. Press, says communism murdered 100 million last century, and the late Dr. RJ Rummel, Univ. of Hawaii, said that gov’ts, mostly leftists, murdered up to 170 mm last century. https://www.hawaii.edu/powerkills/NOTE6.HTM But most leftists are too stupid to know what happened to Robespierre, Trotsky, Lavrentiy Beria, etc., for as Jacques Mallet du Pan (1749—10 May 1800), wrote about the first leftist reign of terror, in his 1793 essay… Read more »

Oh, that’s what I’ve been waiting on, the wisdom of a teenager. I can now gladly give away my worldly possessions and move to the collective.

Own nothing and be happy…yea i do that when Scwab and Gates do it.

Until she is living in a commune, riding a bicycle and eating bugs…she should not be lecturing anyone.

WHY does this NOBODY; this NAZI DEMON keep getting news coverage????

…Great article Patrick…have been trying to reach you and Dr. Reiner Fuellmich (watched 30 hours plus of the Grand-jury) to introduce you both to TIME-EQUITY as the first realistic alternative to capitalism…have a peek at my work… https://bit.ly/3DfNm9V

Brainwashed, mentally compromised, mind-controlled child? What’s really new here when you know the globalists are involved? Nothing. It’s sad and sick but not original.

All leftists admit their climate change war is not about the environemnt but about replacing free-market capitalism with authoritarian global socialism, Her is the moronic AOC’s position as stated by her former chief-of-staff:
“The interesting thing about the Green New Deal is it wasn’t originally a climate thing at all. Do you guys think of it as a climate thing? Because we really think of it as a how-do-you-change-the-entire-economy thing.” https://www.washingtonpost.com/news/magazine/wp/2019/07/10/feature/how-saikat-chakrabarti-became-aocs-chief-of-change/?utm_term=.b996d5303802

The “catastrophic anthropogenic global warming” claim is a complete scam to steal wealth from the middle class to enrich authoritarian socialists and globalists.

Its time to stop giving MK ultra little borg-bot clone children the keys. This vile little child with no knowledge of anything, who has been paraded around the world and shoved down our throats 24/7 is a shining example of the utter disconnect the reptile class has with we the plebs. They think she is an “influencer”, we think she’s “a psychopath who’s head spins round as she vomits green” They think she’s a “celebrity”, we know shes a horrendously abused child who will never be able to survive without her handlers the rest of her life. Quite apart from… Read more »