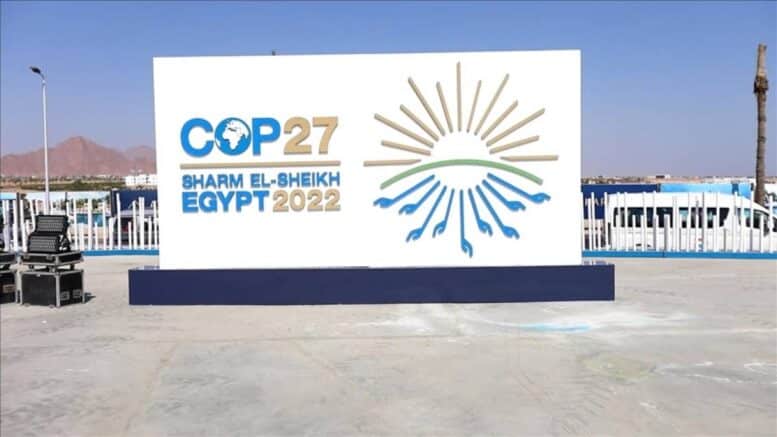 Please Share This Story!
PDF 📄
The UN’s climate summit, COP 27, is underway in Sharm el-Sheikh, Egypt and bold demands were made from the developed world. The UN is already desperate for funding, so what better way than to extort the rest of the world over fraudulent climate threats, slavery, racism and colonial rule?  ⁃ TN Editor

An annual transfer of funds from rich to poor countries, starting at around $2 trillion by 2030 and rising thereafter, is needed for climate “justice” according to a U.N.-backed report released Tuesday.

China has been specifically excluded from the demand for reparations, which includes taxes for fossil fuel companies on their global “carbon profits,” even as the Communist state’s greenhouse gas emissions now exceed the entire rest of the developed world combined.

The first one trillion dollars alone should come from rich countries, investors and multilateral development banks, declared the analysis commissioned by Britain and Egypt, hosts respectively of the 2021 U.N. climate summit in Glasgow and this week’s COP27 event in Sharm el-Sheikh, Egypt.

A further $1.4 trillion must then originate domestically from private and public sources, said the report seen by AFP.

UK Prime Minister Rishi Sunak’s government has already signalled it is open to discussing climate “reparations”  as he prepares tax hikes and public service cuts at home in the name of fiscal responsibility, as Breitbart News reports.

WATCH: XR and BLM Activists Demand Reparations During ‘Walk of Shame’ Protest in the City of London https://t.co/APj5JOdNGf

The new 100-page analysis, Finance for Climate Action, is presented as an investment blueprint to deliver Paris climate treaty goals of capping the rise in global temperatures below two degrees Celsius, and at 1.5C if possible.

“Rich countries should recognise that it is in their vital self-interest — as well as a matter of justice given the severe impacts caused by their high levels of current and past emissions — to invest in climate action in emerging market and developing countries,” said one of the report’s leads, economist Nicholas Stern, who also authored a landmark report on the economics of climate change.

It calls for grants and low-interest loans from the governments of developed countries to double from about $30 billion annually today to $60 billion by 2025, AFP reports.

“These sources of finance are critical for emerging markets and developing countries to support action on restoring land and nature, and for protecting against and responding to the loss and damage due to climate change impacts,” the authors said.

U.N. Secretary-General Antonio Guterres has already lamented the world is in peril as never before.

He told COP27 delegates the latest State of the Global Climate report is a chronicle of climate chaos, adding “We must answer the planet’s distress signal with action — ambitious, credible climate action.”

That nations are buying into this scam without doing the research says a lot. Climate changes because of non-human factors, and it has always been that way. More prosecutions for fraud and coercion are due.

The Satanists at the UN need money to destroy us all.

On 22 September 2022, the UN Human Rights Committee found that the Australian Government had violated the human rights of various Torres Strait islanders through climate change. The Torres Strait islands are low-lying islands between Australia and Papua New Guinea. The islanders complained that as a result of climate change, the islands are eroding, subject to high tides and regular flooding, rising sea temperatures that cause coral bleaching, and impact on the crayfish which are a major source of food and income for the islanders. The Committee agreed with the islander’s claims. It is not clear what evidence, if any,… Read more »

Please provide an itemized list of expenditures to justify the money you are demanding, and we’ll get right on it! Thanks.