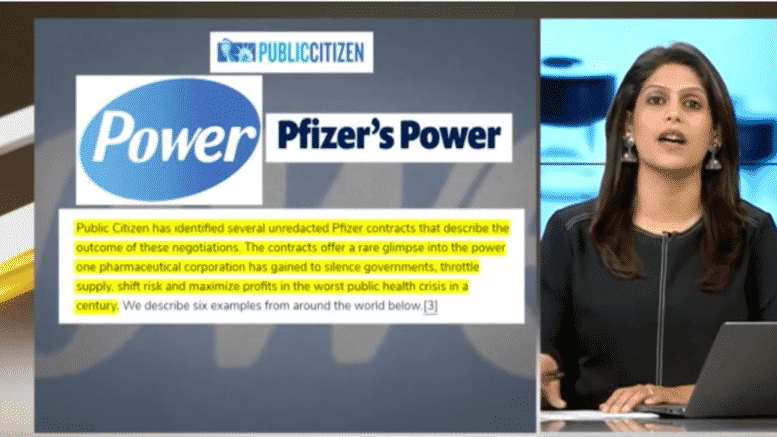 Please Share This Story!
PDF 📄
I was recently asked on a radio interview who is really in control of things: government or Technocrats? I answered, “Technocrats” and this reports clearly demonstrates why. Governments bow low to Big Pharma, Big Tech and Big Corp. Bureaucrats and elected officials who think they are in control are simply delusional. ⁃ TN Editor

WION Gravitas, a popular prime-time show in India that brings viewers news and discussions on concurrent issues and across the globe, exposed in a recent episode how Pfizer bullies and blackmails countries for shots and took a hard line in the push for profit.

A non-profit organization called Public Citizen obtained a confidential unredacted Pfizer contract of some of its negotiations. The contracts show how Pfizer can stop countries from speaking about its contracts, block vaccine donations, unilaterally change delivery schedules and demand public assets as collateral.

“The contracts offer a rare glimpse into the power one pharmaceutical corporation has gained to silence governments, throttle supply, shift risk and maximize profits in the worst public health crisis in a century,” Public Citizen reported.

The table below is an example of the countries where Pfizer has contracts.

Gravitas’ anchor, Palki Sharma Upadhyay said that desperate countries are being forced to make humiliating concessions to Pfizer. They found out some serious revelations. Below are the 6 key points on the Pfizer contracts that were revealed.

You can read the in-depth analysis on each bullet on the Public Citizen website or download the full report here.

Pfizer needs to be dismantled and their power reduced.
They have been sued for fraud and other crimes. Fined?
Make them break up the monopoly if any judge is brave enough to do it?

Not entirely sertain I agree here. Who is controlling it all are those who control and aid those entities, namely the media. Who controls the decimination of the world’s information controlls the world. In the case of information it’s the people like Zuckerman, Gates, Musl, Sorus and Bezos, who are controlling everything and they all are doing it for one and one only thing. Money. They care more about money than any human life, oddly enough, including their own.

Episode 302: The Ethics of the Covid ‘Vaccines’ | RECONQUEST, with Brother André Marie

[…] Explosive: How Pfizer Bullies and Blackmails Countries for COVID Shots —  at technocracy.news […]