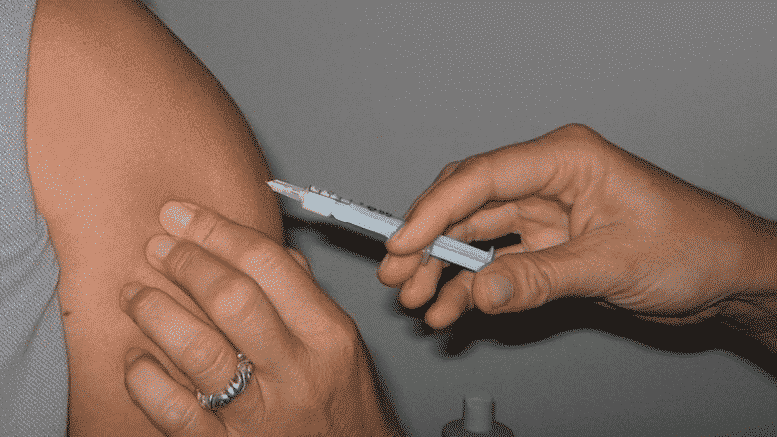 Please Share This Story!
PDF 📄
The DOJ has just dropped a nuclear legal bomb on America’s legal system by summarily declaring that employers have a legal right to force employees to receive injections of FDA unapproved gene therapy. This is totally false and shows that yet another federal agency has been weaponized against the American system and people. ⁃ TN Editor

The corporate media is making much ado about the U.S. Department of Justice issuing a legal opinion that employer mandates of the Covid shots are “legal.”

Are they hoping their readers and viewers are unable to tell the difference between a DOJ “opinion” and a Supreme Court opinion? It certainly looks that way.

In a July 6 memorandum opinion for the deputy counsel to the president, the DOJ magically “determined” there’s no federal law that prohibits “public or private entities from imposing vaccination requirements, even when the only vaccines available are those with [Emergency Use Authorization].”

EUA status means the so-called “vaccines” haven’t been licensed for use but were allowed to be rushed to market due to a declared health emergency by former President Donald Trump. They are still “investigational,” according to the FDA, and everyone who’s received one is part of a massive human experiment.

Final say on whether an arm of the government or a corporate employer can legally mandate people to get the shots will rest with the courts, probably the US Supreme Court.

But the DOJ could not resist the urge to weigh in on the budding controversy of whether employers should be allowed to jump out of their lane and interfere in their employees’ personal medical decisions — something that has never before happened in U.S. history.

This is nothing but a political opinion coming out of a totally politicized DOJ that provides cover for the Biden regime and its corporate cronies on Wall Street, which we all know are desperate to get this experimental serum into the arm of every American 12 years old and up.

Pfizer, one of the three U.S. companies granted EUA permission for its Covid vaccines, announced Tuesday it has upped its already exponentially high earnings forecasted for 2021 by another 30 percent. Moderna likewise expects record profits. What a wonder to have the government buy your product, launch a massive ad campaign at taxpayer expense, and then mandate people to get the product.

Never mind that the product doesn’t even work. USA Today quickly scrubbed an NBC News report Tuesday that cited an anonymous source inside the federal government saying vaccinated people are spreading the Delta variant to the non-vaccinated.

And CDC director Rochelle Walensky said Tuesday “we may be only a few mutations away,” from the virus totally evading the vaccinations.

The propaganda campaign surrounding these shots has been unprecedented, not just in America but worldwide, in spite of the fact that Covid-19 has a survival rate of more than 99 percent for healthy individuals, even higher in school-age children.

See, also from LeoHohmann.com, Who’s calling the shots? Push is on to mask up and shoot up the school children: What parents need to know

The DOJ is simply putting us on notice that it will refuse to do its job of enforcing current U.S. law. It won’t be filing any lawsuits or criminal charges against employers or government agencies that violate both the U.S. Constitution and federal law by disrespecting the personal bodily autonomy of American citizens.

There is a good argument to make that telling someone they must inject an unknown substance based on an all-new technology, completely untested for the long-term impact on the human body, violates the Fourth Amendment.

If the state, let alone a private company, is prohibited from breaking into your home and sifting through your personal effects without a warrant, how is it OK to break your skin with a needle and put a bio-chemical agent into your bloodstream?

This DOJ opinion has absolutely no binding legal authority, but you wouldn’t know it by reading the day’s news headlines.

The motivation behind this opinion is as obvious as the toothy grin on Biden’s face: To send a message of intimidation to Americans and convince them that they might as well give up right now in their fight against vaccine mandates and totalitarian digital health passports.

The federal Emergency Use law that allows the FDA to authorize new drugs to be administered to the public before being licensed is crystal clear that persons receiving such drug treatments must have the “option to accept or refuse.”

But of course the mainstream media was all over the story, spinning it as if the DOJ had just issued the final, authoritative word on vaccine mandates.

More surprising was how some conservative news outlets walked right into the DOJ’s propaganda trap, coming out with their own deceptively headlined articles.

Anyone who passed political science 101 in freshman year of college knows the DOJ, as a federal agency of the executive branch, doesn’t have the authority to “DECLARE” anything legal or illegal. They are a law enforcement agency, specifically set up to enforce federal laws.

The DOJ, like anyone else, is entitled to have an opinion. But that’s all it is. An opinion. It is utterly meaningless other than to inform us which federal laws this agency intends to enforce and which laws it intends to not enforce.

The federal Emergency Use Authorization law passed by Congress more than two decades ago does require that drugs still in the FDA’s “investigational” stages may be allowed to be administered during an “emergency” but such drugs must remain optional at the patients’ discretion.

The DOJ knows this. They simply don’t want to enforce the law.

But even if there was no such federal law, the DOJ has no say over the numerous state laws that have banned vaccine mandates and vaccine passports. A few states, like Montana, have banned this type of medical tyranny from being implemented by both government and private industry while a larger number of mostly red states have banned only government agencies from requiring people to be vaccinated.

The DOJ has become a rogue federal agency that selectively enforces laws based on its political opinion.

But the question remains, why did both Fox News and the Epoch Times choose to deceive their readers by suggesting in their headlines that the DOJ had just “declared” the law of the land on vaccine mandates? Either they are completely bereft of understanding with regard to our Constitution and how it lays out the separation of powers via a system known as federalism, or they are involved in the mass propaganda campaign surrounding these shots.

Shame on Fox. Shame on the Epoch Times. We expect more of you.

But we dont have any representation to stop them.

They can go door to door race rioting and killing people,
behind a portland police escort, if theres nobody to stop them.
What are you going to do with any law that nobody will enforce.

And we have to PUNISH TEH GOP FOR THAT.
They deserve no support by default for that.

The DOJ has become the DOI (dept. of injustice). They cannot render a decision about LAW. Of course, the stupid people will fall for the statement. The DOI can say anything. However, as the article points out it’s clear that they do not intend to enforce the real laws; they intend to obstruct them. They have issued an opinion which will pump-up the corporate world’s arrogance to make their employees line up and be shot up because employees will be too fearful to say NO. If these people do not stand up for their rights they deserve what they get.… Read more »

wow….. wonder how many sheeple will fall for this lie and lay down their lives by submitting to the kill shot?????

My entire family has done it. I don’t see them dropping like flies…yet. I’m confident that they will, however. Never listened to a thing I said. The most experienced and informed of all of them, and my offerings don’t matter. I imagine that they need to rendesvouz with the mothership.

Yep!……..We are STILL a Nation of LAWS! Namely, The Constitution (and The Bill of Rights). Just because ‘they SAY’ it’s so…..doesn’t mean SQUAT! These Globalist CRIMINALS NEED to DECLARE that this country is NO LONGER THE UNITED STATES OF AMERICA (and, therefore, The Constitution/Bill of Rights no longer exist). Once THAT is done, 85% of AMERICA will go APE-CH!T!!!!!!!!!!!!!!!!!!!!!!!!! Every politician will then be STRUNG UP on the nearest tree!! Good luck with that, you FILTHY Globalists! This is NOT Europe and we are not SLAVES!! We ARE AMERICANS!!!! We are NOT jews (and OTHERS) in N.az.i Germany in the… Read more »

Unfortunately, all I can formulate here is a poorly worded and horribly spelled response: good luck with that. You, me, we…are being ploughed under. You’re almost right. We’re not MERELY slaves. We are the tomato plants, and this is the end of the season. These people “in charge” know you. They raised you. They raised us all. They’re not “trying” to do something, they’re doing it. And you know why they will succeed? Because they have control over every single important (and most of the unimportant) tools, resources, weapons, people on earth. Not just in one neighborhood or city. Not… Read more »

SUE THEM. Nuremberg Trials, U.N. Commission on Human Rights, BOTH have found it illegal to force “vaccines”. It’s gonna be a blood bath for the lawyers, making millions off of companies thinking they are above human rights. “My body, my choice” isn’t that what they say!