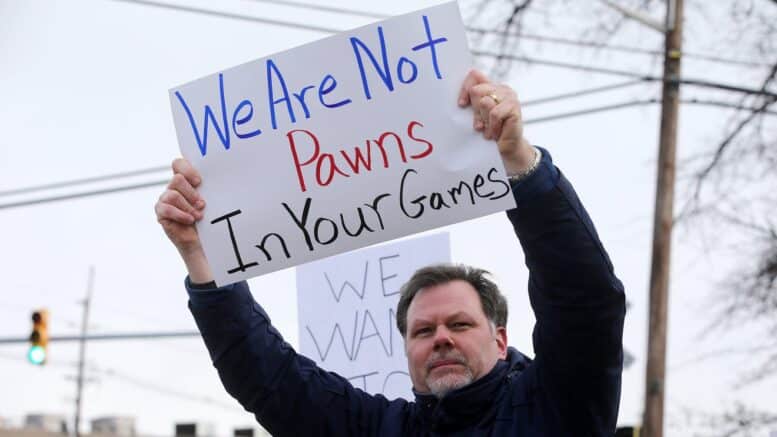 Posted By: Kaitlan Collins and Kevin Liptak via CNN September 9, 2021

The full force of Technocracy and Scientific Dictatorship has fallen upon America as Biden will announce that all federal workers will be forced to be vaccinated, with limited exemptions or exceptions allowed. The mandate will also likely fall on all contractors and subcontractors doing business with the federal government.

This dystopian nightmare is the greatest national security threat in America’s history because it puts the health of the nation at risk. This is especially draconian in the light of vax-czar Anthony Fauci being fully exposed as a blatant and corrupt liar before Congress and the American people. ⁃ TN Editor

President Joe Biden on Thursday will impose more stringent vaccine rules on federal workers, and take steps to encourage private businesses to do the same, during a major speech meant to lay out a new approach to combating the coronavirus.

Among the steps the President will take is signing an executive order requiring all federal workers be vaccinated against Covid-19, with no option of being regularly tested to opt out of the requirement, according to a source familiar with the plans.

The President will also sign an executive order directing the same standard be extended to employees of contractors who do business with the federal government. The Department of Defense, the Department of Veterans Affairs, Indian Health Service and National Institutes of Health will also complete their previously announced vaccination requirements, which the White House estimates covers 2.5 million workers.

The new announcements move beyond what Biden announced earlier this summer, when he required federal workers be vaccinated but allowed for those who opted out to be subject to stringent mitigation measures. The White House has said the federal government should act as a model for other businesses in their own vaccine mandates, and has praised large companies that require employees to be vaccinated.

Biden on Thursday also plans to announce a major expansion to free testing, a step public health officials have said is critical to containing the virus, particularly as children return to school and some workers return to offices.

And he will address the confusion over booster shots, though will not make any new announcements on when additional doses will be authorized for Americans.

The six-pronged plan Biden is set to unveil was finalized by the President and members of his public health team on Wednesday afternoon. He received a briefing in the Oval Office from his Covid-19 response team on the anticipated new steps.

A White House official said the six pillars of Biden’s plan include: vaccinating the unvaccinated; further protecting the vaccinated through booster shots; keeping schools open; increasing testing and requiring masks; protecting the economic recovery; and improving care for those with Covid-19.

I am a contractor and I have refused work for the Fed government. I quit DHS 3 years ago when I saw how many people they were hiring for the coming role they would play. DHS is now in control of giving unemployment benefits, social security, food stamps, low income housing, taking kids from parents, and they manage those children taken away from the parents the meetings between parents and kids that is only allowed by them in their establishment for only a few hours without privacy. I am sure you will not be able to go into the DHS… Read more »

I suspect that people who refuse covid jabs may be unable to collect unemployment, social security benefits, veterans benefits and only God knows what else. The amount of deaths, Nueremberg Code illnesses or injuries from the covid injections does not matter one bit to those who are pushing that covid snake oil venom. I know that God will deliver those who stand their ground. We even have children suffering and dying because of the covid shots. No doubt in my mind that spiked vaccines are the reason covid and other autoimmune diseases exist. The ruling class can’t stand the fact… Read more »

Another wonderfully biased article by CNN. Thank you CNN!

It’s a damn shame we can’t count on the U.S. military to protect our liberties in a reputedly free country. I guess they’ve been too busy destroying middle-eastern countries that were never a threat to America than to worry about the mushrooming tyranny at home.

Another wonderfully biased article by CNN. Thank you CNN!

It’s a damn shame we can’t count on the U.S. military to protect our liberties in a reputedly free country. I guess they’ve been too busy destroying middle-eastern countries that were never a threat to America than to worry about the mushrooming tyranny at home.

The biggest of our problems is those who are in compliance with tyranny.

Could be good news. If they are smart they will quit. We need to reduce the size of Government anyway.

I was informed that people should not quit, but be fired, so that they can get in writing, that it was because they refused the vaccine.

Biggest bunch of lies I’ve ever read, this week, in one place. CNN and Biden the pusher-man! Biden represents his new Progressive fascist shaming/blaming constituents well. He’s “growing impatient with the unvaccinated” he states talking like a priest as he supports his position with lie after lie after lie–all proven lies, too. What a fascist dick. If you haven’t noticed he just declared all out war on Americans via the monetary system. That means you. Logic tells thinking people that if you have to force every living human to shoot-up an experimental cocktail, even small undeveloped children, when millions have… Read more »