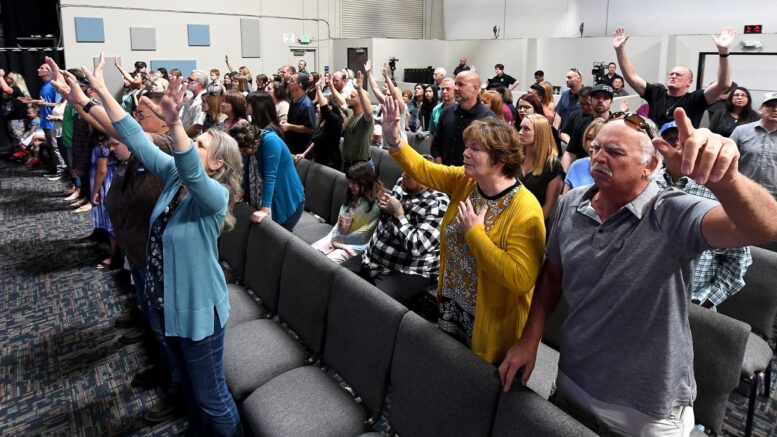 Please Share This Story!
PDF 📄
The pivot to blaming white Christians for causing the pandemic is happening right now. Yesterday’s taking points were merely blaming the un-vaxxed but now Christians, and white ones at that, are being singled out as the real perpetrators. Predictably, the next conclusion from this will be that not taking the vaccine is racist and that all white Christians are therefore racist.

More than six months into the country’s Covid-19 vaccination campaign, evangelical Christians are more resistant to getting the vaccine than other major religious groups, according to newly released data.

Some 24% of white evangelicals said in June they wouldn’t be vaccinated, down from 26% in March, according to a study from the Public Religion Research Institute, a nonpartisan group that studies the intersection of religion and public life, and Interfaith Youth Core, a nonprofit focused on interfaith cooperation.

Evangelicals of all races make up about one-quarter of the U.S. population, and health officials say persuading them to get the shot is crucial to slowing the spread of the Delta variant fueling recent increases in Covid-19 cases.

The percentage of white evangelicals who say they have been vaccinated or plan to get the shot as soon as possible was 56% in June, up from 45% in March. That is tied for the lowest figure among groups included in the survey, along with Hispanic protestants, many of whom are evangelical.

Among all Americans, 71% have been vaccinated or are willing to be, according to the survey, while 13% staunchly oppose the shots.

The study reported results for Protestants and Catholics by certain racial groups, but didn’t do so for religions with fewer adherents, such as Judaism and Mormonism. “White evangelicals” were the only reported category of evangelicals.

Plateauing vaccination rates combined with the more transmissible Delta variant are the main drivers of recent increases in infections and hospitalizations, health officials say, and most hospitalizations and deaths are among unvaccinated people. Among Americans 12 and older, 57.5% are fully vaccinated, according to the Centers for Disease Control and Prevention.

White evangelicals have a history of vaccine resistance: A 2017 survey by the Pew Research Center found that 22% of white evangelicals opposed mandatory measles, mumps and rubella vaccinations for children to attend school, higher than for other major religious demographics.

Yeah, WSJ: It’s White Evangelical Christians Who Refuse Vaccines. No, how about educated people that don’t want an experimental drug put in their bodies. A drug not approved by the FDA, not thoroughly tested and no long term testing. The people that got the shot/shots are the long term testers.Take a look at what this nurse has to say. https://www.brighteon.com/82932c26-9234-4057-b283-6d458d3107df

Beware these polls showing massive percentages of folks who have been vaccinated, they are lies. They have been inflating the numbers for those vaccinated for some time because they want the unvaccinated to seem like such a tiny minority that no one would want to be in that group. Truth is, if we really were at 71% vaccinated then the push to vaccinate would not be as heavy and strong as it is right now. The number is probably more like 30%-40% which is why they are pulling out all the stops to force vaccination and those idiotic passports.

You prove out point White Evangelical Christians are not educated people, because if they were they would get the vaccine! You are nothing but a bunch of self righteous, ignorant, and bible toting bigots that only believe in race purity (White) while you support a former president who grabbed women’s private parts, lied all the time and led you around like sheep to the slaughter, and you bought it hook line and sinker! Your power is dropping and soon you will regret your actions and finally pay for them. We won’t miss you!

This is also lies. I know a LOT of “white evangelicals” that HAVE been jabbed. The only people NOT getting jabbed are the FREE THINKERS, regardless of any affiliation!

Boy, how many lies can one Administration tell in a single article? Never heard such bull in my life. The numbers are ridiculously skewed, of course. I don’t believe a single word of their quoted percentages–ramped up to look good. Like covid’s deadly grip on the healthy it all comes from liars, thieves and murderers. NOT buying it.

When we choose to partake in this world system or their “magic potions & poisons”, be prepared for potential consequences. The law of “reaping & sowing” is universal for all of us. Sort of simple for me…”Life is in the blood” and my God given conscience says “no shot”. Why poison it knowingly? WSJ does not understand the spiritual.
Revelation 18:23 “For your merchants were the great men of the earth, for by your sorcery all the nations were deceived.”

I’m Christian and have had words with some I know in my church, “that I have not been allowed to attend since march 11th 2019”, over vaccines. I believe GOD created nature and the only enemy of humans are other humans. Nature is not our enemy. Look deeper. All trust in medical science needs a huge over view. Medical Fascism. They started with us elderly. ( insurance fraud). It’s just how I think. The world for us Christians has become very small at this time. Even so LORD JESUS come. Be Blessed.

As per usual, we see News Corp (run by globalist Rupert Murdoch which includes the WSJ and Fox News) continue on with their anti-human, anti-American agenda. Murdoch and his worthless children are enemies of the American Republic, simple as that. Did you ever wonder why the WSJ has always advocated illegal immigration and amnesty for illegals? Fox News will not carry Mike Lindell’s cyber symposium (10-12 August) to show and discuss the cyber election fraud. Why? BECAUSE MURDOCH IS A GLOBALIST WHO WANTS TO RUN US INTO THE GREAT RESET. The Murdochs, the WSJ, and Fox News are enemies of… Read more »

You have to understand the fox. I’ll tell you what this messaging is. They are FURTHER dividing libs from everyone else. They’re giving the libs a cliche to throw at the people who (in and out of their circles) think for themselves. Now, they can “officially” call ANYONE who won’t vax a “born-yesterday Christian anti-vaxxer”, or whatever BS they will come up with. Frankly, I’m no Christian, not by a long shot, but I’ve read and I know a (not THE) mark of the beast when I see one. I also know when “real life” is starting to look a… Read more »

sharon a
Reply to  Jeremy Lamb

You said, “Frankly, I’m no Christian, not by a long shot”. Sorry to read that. Hope you reconsider but I digress. I find your thoughts relevant and savvy and also wish more folk would “wise up” to our present day reality.
It is written, that, “evil men and impostors shall advance to the worse, deceiving and being deceived.” Rest assured; it is also written, “With Him are strength and prudence. The deceived and the deceiver are His.”

they lead the nation in 1776 and again today
any why would any comment need “approval”?