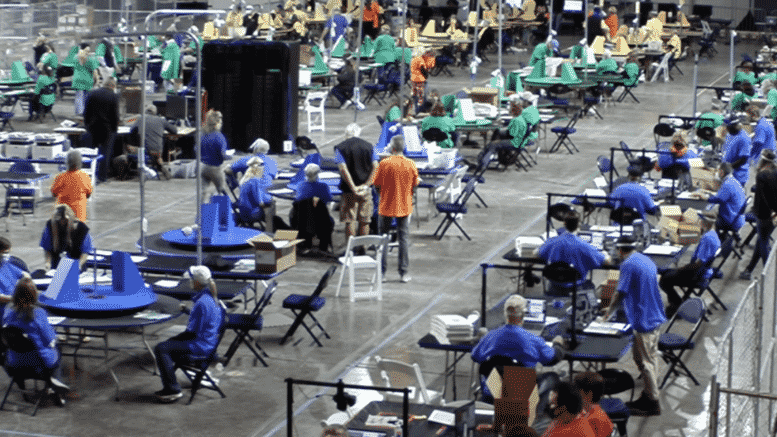 Posted By: Michael Patrick Leahy via Breitbart May 14, 2021

Please Share This Story!
PDF 📄
Technocrats in Arizona’s Maricopa County are scattering like cockroaches when the lights are turned on. County officials are stonewalling legislative subpoenas, deleting entire election databases, refusing to turn over passwords and routers used during the election.

In the meantime, Dominion Voting Systems has also belligerently refused to give machine passwords to the Arizona audit team. This also explains why Maricopa County officials could not provide the passwords – they never had them! How ludicrous is it that Maricopa County would contract with Dominion Voting Systems in the first place without having administrative control over those machines?

The president of the Arizona State Senate asked the chairman of the Maricopa Board of Supervisors in a letter on Tuesday to address “three serious issues that have arisen in the course of the Senate’s ongoing audit of the returns of the November 3, 2020 general election in Maricopa County. “

As Breitbart News reported on December 16:

Arizona Senate Republicans on Tuesday issued subpoenas to the Maricopa County Board of Supervisors for a scanned ballot audit and ‘full forensic audit of ballot tabulation equipment, the software for that equipment and the election management system used in the 2020 general election.’

The audit of Maricopa County’s November 2020 election results began on April 23 and may continue into the summer.

“The first issue concerns Maricopa County’s apparent intent to renege on its previous commitment to comply fully with the legislative subpoenas issued on January 13, 2021, which, as you know, Judge Thomason found were valid and enforceable,” Fann wrote in Tuesday’s letter, adding:

To date, attorneys for Maricopa County have refused to produce virtual images of routers used in connection with the general election, relying on a conclusory and unsupported assertion that providing the routers would somehow “endanger the lives of law enforcement officers, their operations, or the protected health information and personal data of Maricopa County’s citizens.”  . . .

Nevertheless, in an effort to resolve the dispute regarding production of the routers, we propose that agents of CyFIR, an experienced digital forensics firm and subcontractor of Cyber Ninjas, review virtual images of the relevant routers in Maricopa County facilities and in the presence of representatives of the Maricopa County Sheriff’s Office.

Fann then addressed the second issue, chain of custody and ballot organization anomolies:

As the audit has progressed, the Senate’s contractors have become aware of apparent omissions, inconsistencies, and anomalies relating to Maricopa County’s handling, organization, and storage of ballots.  We hope you can assist us in understanding these issues, including specifically the following:

Fann then addressed the issue of deleted data bases:

We have recently discovered that the entire “Database” directory from the D drive of the machine “EMSPrimary” has been deleted. This removes election related details that appear to have been covered by the subpoena.

In addition, the main database for the Election Management System (EMS) Software, “Results Tally and Reporting,” is not located anywhere on the EMSPrimary machine, even though all of the EMS Clients reference that machine as the location of the database. This suggests that the main database for all election related data for the November 2020 General Election has been removed.

Can you please advise as to why these folders were deleted, and whether there are any backups that may contain the deleted folders?

Fann closed by inviting Board Chair Sellers and appropriate Maricopa County employees to meet with her personally at a hearing room in the Arizona State Capital on Tuesday, May 18 to address these three serious issues.

The world is completely lawless! They will not be prosecuted because the prosecutors are corrupt as they are, and don’t look to the supreme court for help as they have allegiance to the pope who makes up his own laws. Jesus says, “And because lawlessness will abound, the love of many will grow cold.” Matthew 24:12 nkjv The condition without laws~here we are! Where do we get laws from? Originally they came from the BIBLE! But since they threw that out everyone does what is right in his own eyes. “Whoever commits sin also commits lawlessness, and sin is lawlessness.” 1 John… Read more »

Marxists in Washington and in Arizona are determined to hide accurate election results. Nothing will happen to them, and never will until Conservatives develop a backbone. As of now, I don’t see that happening.

The Demonrats have already violated many laws. Do we really think they will comply with a subpoena now? Laws do not apply to them.