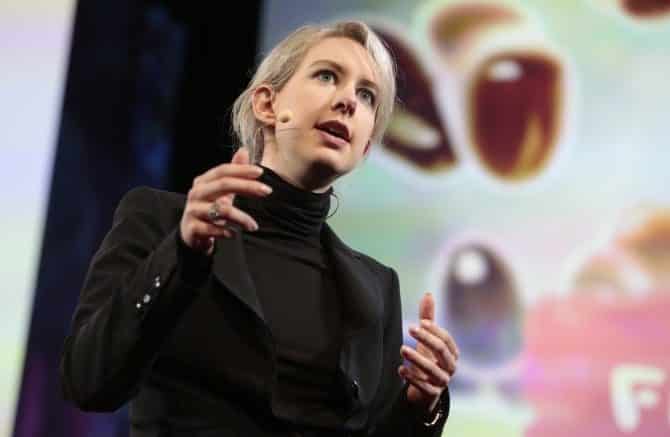 This 34-year old pathological Technocrat lied her way to fame and fortune and scored a $700 million fraud that could have dealt her a lifetime prison sentence, but instead, the SEC slapped her on the wrist and set her free. At one time, she was considered the youngest self-made billionaire in Silicon Valley. Where else does such abject fraud exist in Silicon Valley? ⁃ TN Editor

Elizabeth Holmes — the Silicon Valley wunderkind whose blood-testing startup Theranos has collapsed in a slew of scandals — has been charged with “massive fraud” by the Securities and Exchange Commission.

The SEC on Wednesday accused Theranos CEO Holmes and a top lieutenant of defrauding investors of more than $700 million through false claims about its technology.

Holmes — a Steve Jobs wannabe who dressed exclusively in black turtlenecks as she talked up her blood-testing unicorn, which at one point boasted a valuation north of $9 billion — settled with the regulators for $500,000 while neither admitting nor denying the accusations.

Theranos disclosed in a 2016 letter to investors it was under a criminal probe. No criminal charges have been filed, and it’s not known if the investigation is ongoing.

Holmes additionally agreed to not be a director or officer of a public company for 10 years, and to forgo profiting from Theranos ownership until $750 million is returned to investors, according to the consent order with the SEC.

Theranos and 34-year-old Holmes ran “an elaborate, years-long fraud in which they exaggerated or made false statements about the company’s technology, business, and financial performance,” according to the SEC.

While Theranos had said it was on track to make $100 million by the end of 2014, the real figure was “a little more than $100,000,” according to the SEC. And, contrary to what Theranos told investors about the Department Defense using its blood tests, they were “never deployed by the DOD in the battlefield, in Afghanistan, or on medevac helicopters,” according to the settlement.

“Investors are entitled to nothing less than complete truth and candor from companies and their executives,” Steve Peikin, the SEC’s head of enforcement, said in a statement.

The charges amount to one of the biggest scandals to rock the tech world since the bursting of the tech bubble in 1999.

The SEC claims that Holmes misled investors about her technology, which Theranos said was able to test for diseases with only a pinprick, and more cheaply than what was commercially available, according to the SEC settlement.

In reality, the company didn’t have any reliable technology to test blood samples, and sent blood to third-party companies for testing, according to the complaint.

The real story should be is how does a start-up company with no revenues, no net income and no real assets get to be valued at $9Billion?
The answer is that the global elites (establishment) were in on it.

Eugenicist global elite Marilynne and the eugenicist global elite’s, yes men, yes women, water carriers, lapdogs, parrots, obfuscators, pit bulls and fixers. Their Master is Lucifer and those mad dogs will cut anyone’s throats just for the scent of a rancid bone thrown from the toilet throne of their master, the great deceiver, the lord of the flies. Pride indeed does come before the fall. “Half the harm that is done in this world is due to people who want to feel important. They don’t mean to do harm; but the harm does not interest them. Or they do not… Read more »