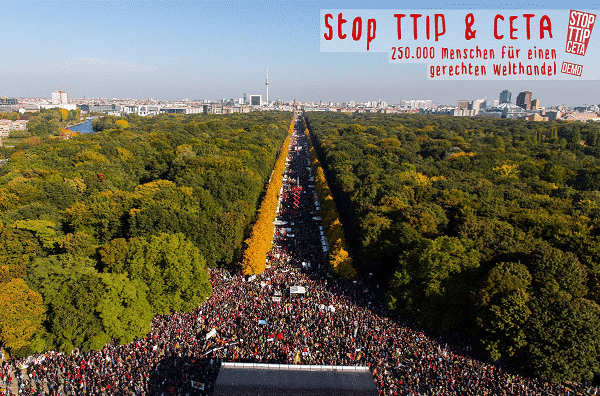 TN Note: The two major trade agreements before us are the Trans Pacific Partnership Agreement (TPP) and the Trans-Atlantic Trade and Investment Partnership Agreement (TTIP). Together, they transform almost 100% of all global trade and domestic economies, harmonizing regulations, rules and governance issues relating to the economy. TPP and TTIP run on a parallel and coordinated track with the 2030 Agenda just passed by the United Nations. I will remind you that the current U.S. Trade Representative, Michael Froman, is a member of the elitist Trilateral Commission. The world is rebelling already! It is essential that Americans fight tooth and nail to defeat these two trade agreements because they are death to America.

Despite its Earth-shattering status as one of the biggest and most controversial trade deals we’ve seen in many years, the TTIP (Transatlantic Trade and Investment Partnership) has received very little coverage in the U.S. media.

But protests and opposition to this Pro-Corporate Dream Bill has raged across Europe. And in America, another similar deal that directly affects us, the Trans-Pacific Partnership (TTP) looms in Congress. If passed, the TTP will make passage of the TTIP easier.

In Europe alone, over 3 million signatures have been gathered by the website Stop TTIP.

This past Saturday, over 250,000 people turned out against the secretive trade deal in what’s being called the biggest rally in Germany in many, many years — and with what’s at stake for people who care about GMOs, food and chemical standards and national sovereignty from corporations, it’s easy to understand why.

While Americans fight for the right to GMO labeling and stop the DARK Act here, as many as 19 countries in the EU have instituted bans on GMOs, including Germany. But if passed the TTIP could create several avenues for the United States to spread its unwanted to GMOs and chemical products.

In Berlin, among the 250,000+ protesters were environmental groups and anti-corporate globalization groups. They marched from the main railway station in central Berlin to the nation’s parliamentary building. One group even dragged a giant “Trojan Horse” through the streets to demonstrate how the deal is being rammed through with no regard to the damage it would do to everyday people.

“We are here because we do not want to leave the future to markets, but on the contrary to save democracy,” said Michael Mueller, president of the ecological organization German Friends of Nature.

If passed, the TTIP could:

According to CorporateEurope.org, the number one lobbying interest for the deal is Agribussiness – and Monsanto is pushing hard for the TTIP, the United States’ “Trojan Horse” in Europe.

Stopping to TPP at Home (and Big Pharma)

As mentioned earlier the TPP is the first step in this trade deal juggernaut that has been crafted in secrecy on behalf of multi-national corporations. Organizations such as Food & Water Watch are urging people to contact their reps. in Congress asking them to reject the TPP.

The Elites arrogantly assume that everyone will just lay down and passively accept their plans to rule everything on earth. This German demonstration shows otherwise! Bravo!

“Despite its Earth-shattering status as one of the biggest and most controversial trade deals we’ve seen in many years, the TTIP (Transatlantic Trade and Investment Partnership) has received very little coverage in the U.S. media.” Proof positive that our media is no longer serving to inform us of the truth, and are merely a mouthpiece for the powers that should not be.

I am an expatriate living in Europe the last 25 years and believe me, the population over here do not want the TTIP and are fighting tooth and nail to stop it! But the elite idiots of the EU want to force it on the People, just like the Kenyan Queen, Hussein, wants to force it on the American Public! As everyone has seen, anything and everything Hussein Obama touches turns to crap! The queer boy has the brains of a toad and only wants to bring the USA down to Kenyan Level so he will feel more at home!… Read more »

Americans live in a “fancy world” where “sports” movie stars, Disneyland, movies, vacations, are some of their preoccupations. The
rest are just “stoned.” So sad to see our country being destroyed by our psychopath in chief.

Isn’t this the deal Obama slipped through while our news just showed the Ferguson riots 24/7? OR was it when the Charleston murders were happening? Has anyone noticed how our slippery president slips this very sensitive deals through when he has created a
diversion? It is part of his training as a community organizer. Lets face it, Obama is as crooked as a corkscrew. He will do anything to win. I do believe his life depends on his trickery!