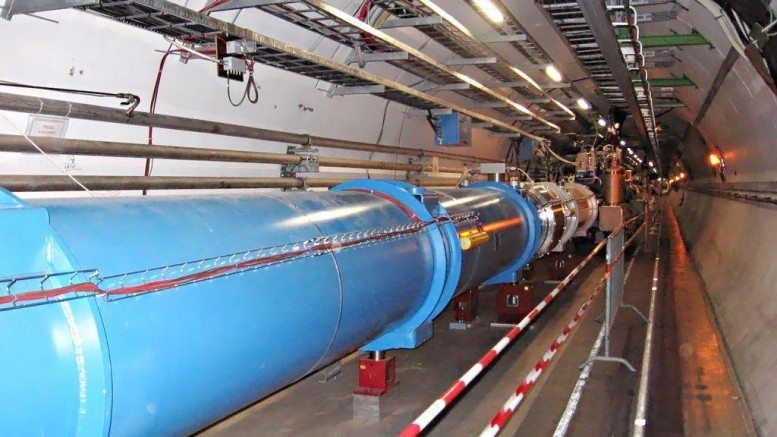 TN Note: Bolstered by the discovery of the Higgs Bosom particle (or, the “God Particle”), scientists at CERN are convinced that they can discover multiple parallel realities by opening up black holes. This is stuff more likely to occur in a Star Trek movie than in real life, the they are convinced…

The staggeringly complex LHC ‘atom smasher’ at the CERN centre in Geneva, Switzerland, will be fired up to its highest energy levels ever in a bid to detect – or even create – miniature black holes.

If successful a completely new universe will be revealed – rewriting not only the physics books but the philosophy books too.

It is even possible that gravity from our own universe may ‘leak’ into this parallel universe, scientists at the LHC say.

The experiment is sure to inflame alarmist critics of the LHC, many of whom initially warned the high energy particle collider would spell the end of our universe with the creation a black hole of its own.

But so far Geneva remains intact and comfortably outside the event horizon.

Indeed the LHC has been spectacularly successful. First scientists proved the existence of the elusive Higgs boson ‘God particle’ – a key building block of the universe – and it is seemingly well on the way to nailing ‘dark matter’ – a previously undetectable theoretical possibility that is now thought to make up the majority of matter in the universe.

But next week’s experiment is considered to be a game changer.

Mir Faizal, one of the three-strong team of physicists behind the experiment, said: “Just as many parallel sheets of paper, which are two dimensional objects [breadth and length] can exist in a third dimension [height], parallel universes can also exist in higher dimensions.

“We predict that gravity can leak into extra dimensions, and if it does, then miniature black holes can be produced at the LHC.

“Normally, when people think of the multiverse, they think of the many-worlds interpretation of quantum mechanics, where every possibility is actualised.

“This cannot be tested and so it is philosophy and not science.

And this is supposed to benefit mankind how? Money for nothing is all it is! Waste! God is in charge, NOT Man!

All a roll of the dice then? If we find another Universe great!! However we may also all get sucked into a black hole. Totally irresponsible of scientists to risk our planet and everything on it, just on a theory. Unless they already know with certainty the answer to that question already and if so how?

the black holes would supposedly only be momentary,
I don’t think scientists a are risking all of our lives based on a theory, for this to be given the go ahead they must have some far more solid proof of this theory.
however its not the black holes that worry me, but the possibility of tearing the fabric of space time or opening a literal portal to a dimension containing god know what, it could be a portal to “hell” i use apostrophes becasue im atheist.

Well, when the Manhattan Project was under development and when it was only the theory, scientists have calculated that there is a huge possibility that it could lite up the earth’s atmosphere. They tested it anyway!!!! Bunch of effing psychopaths playing with the expensive doomsday toys.

There’s an interesting coincidence with CERN and an earthquake that happened at the Exact same time as one of their large tests! Just Google it for more info.

The CERN logo is 666, sure that’s just pure coincidence right? Then they place a statue of shiva who is called the destroyer. Then they build this LHC over an ancient temple to Apollo also described in revelation as Abaddon “the destroyer” also where a star is given the keys to the bottomless pit, and opened. The soon to come Anti Christ, also formerly known as Nimrod, who “was and is not, and yet to come” whose Hebrew name is Nimrod Ben Cush adds up to 666, also described in the epic of Gilgamesh being 2/3rds god, 2/3rds is 66.6%.… Read more »

Portal to other dimensions or ripping the protective veil???? When he opened the Abyss, smoke rose from it like the smoke from a gigantic furnace. The sun and sky were darkened by the smoke from the Abyss. Revelation 9:2 NIV

Hum. . . reminds me of that line in “Jerusalem” by Wm. Blake, –set to music, it is the unofficial English national anthem –, about “dark Satanic mills.”

What could POSSIBLY go wrong?

At least 6 killed in July 4th parade shooting in Illinois Awake Ritual to CERN A day Before 7-5-2022 - TommyTruthful.com

[…] fact that LHC has detected mini black holes while smashing the particles, which could indicate parallel universes in extra […]

[…] fact that LHC has detected mini black holes while smashing the particles, which could indicate parallel universes in extra […]