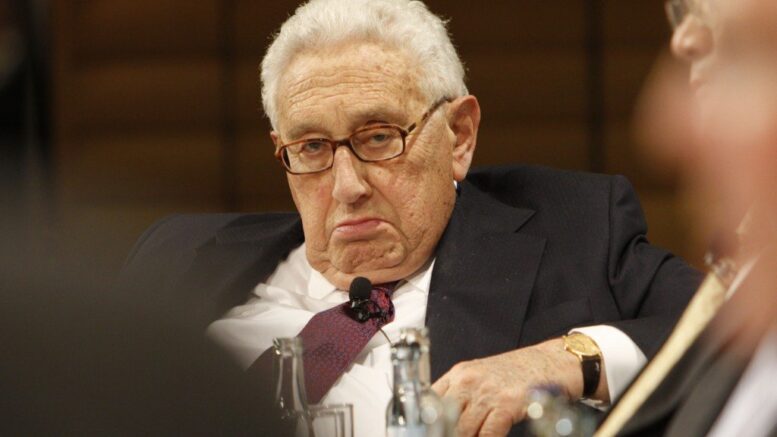 Please Share This Story!
PDF 📄
One of a few remaining founding members of the Trilateral Commission in 1973, Kissinger has pushed the new world order, aka Technocracy, for decades. In reality, he is a pedestrian academic who recites from a single playbook. ⁃ TN Editor

With the White House continually provoking tensions against Russia and China, the doyen of American foreign policy, Henry Kissinger, dramatically warned Washington last week to either agree to a new international system or continue pushing tensions that are leading to a situation similar to the eve of World War One.

“if you imagine that the world commits itself to an endless competition based on the dominance of whoever is superior at the moment, then a breakdown of the order is inevitable. And the consequences of a breakdown would be catastrophic.”

The veteran diplomat urged the U.S. to understand that not every issue has “final solutions” and warned

“if we don’t get to an understanding with China on that point, then we will be in a pre-World War One-type situation in which there are perennial conflicts that get solved on an immediate basis but one of them gets out of control at some point.”

However, the idea that the U.S. should stop imposing its will on everyone else will not be easily accepted in Washington. This is attested by the sharp rhetoric and personal insults that U.S. President Joe Biden continually levels against his Russian and Chinese counterparts, Vladimir Putin and Xi Jinping.

High-ranking Chinese official Yang Jiechi told U.S. Secretary of State Anthony Blinken on March 18 in Alaska that “the United States does not have the qualification to say that it wants to speak to China from a position of strength.” Then, Russian Foreign Minister Sergei Lavrov and his Chinese counterpart Wang Yi boldly said days later on March 22 during their meeting in Beijing that they “jointly safeguard multilateralism, maintain the international system with the UN at its core and the international order based on international law, while firmly opposing unilateral sanctions as well as interference in other countries’ internal affairs.”

Kissinger’s career is washed in blood when we remember his backing of Pakistan during Bangladesh’s War of Independence despite the massacre of hundreds of thousands of people and mass rape; orchestrated a military coup in Chile to remove democratically elected Allende in favor of the Pinochet dictatorship; tacitly supported Indonesia’s mass killing of hundreds of thousands of East Timorese; and, blessed Turkey’s invasion of northern Cyprus that led to 200,000 Greek refugees without a right of return – among many other things.

Unfortunately at 98 years old he has not much time left to repent. Atheists will never win. Never. “For it is written, As I live, saith the Lord, every knee shall bow to Me, and every tongue shall confess to God. So then every one of us shall give account of himself to God.” Romans 14:11-12. Don’t believe it, I’m very sorry, but the truth must be told. All the evil in this world is caused by PRIDE-little man. We need God! The New World Order is the kingdom of Satan people. It will be a kingdom of death, and… Read more »

Weird how most of the creepy globalists are over 80. Including those in DC.

I sense a ruse used against the American public as as far as I can tell American politicians, besides some posturing and grumbling, are all on board with the corporate UN SDG, the 4IR and under the drive of the WEF the reset. Kissinger is just a point man doing the dirty work his masters hand him. He has no redeeming features I can see as a human being that offer a sliver of balance to the evil he has wrought.

Tru dat brother! You got it mostly right, except…

Kissinger IS one of the masters, not beholding to them. He came out here to represent his buds, his group–the Black Hand (or whatever label you prefer for them). As is well represented herein, he’s done terrible things on this planet. AND, he may be 98 but he is very, very ‘personally’ powerful. I do not mean he’s powerful inside the Narrative’s propagandized idea of success (wealth and influence). I mean beyond the concept of power for 99.98% of humans currently living on the globe today.

Henry Kissinger is a war criminal and should be treated as one. Therefore, why would anybody pay attention to the advice or counsel of a war criminal, lest they share their complicity?

Too bad this miserable old facist/communist bastard has lived too long. He is personally responsible for the death of many thousands wherever he has shown the bloody hands. He laid the ground work for China to overtake the US. His ugly face reflects what’s on the inside. He is pure evil.

… Moreover, his understudy, Netanyahu, will continue, with Western-support, where this barbarian, HK, leaves off …

Who would listen to that pos