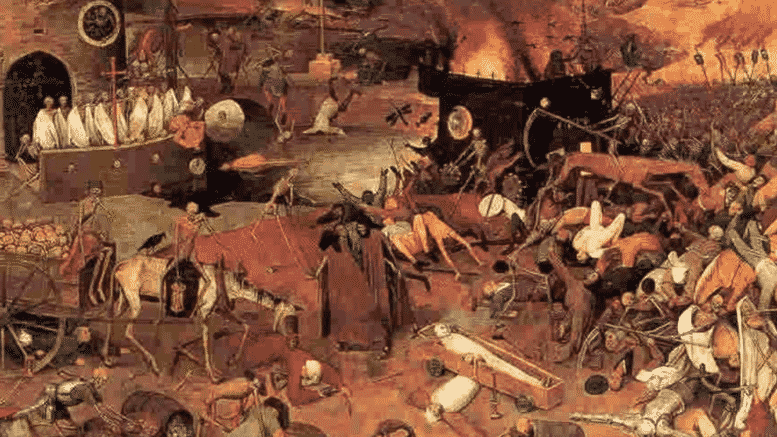 Please Share This Story!
PDF 📄
Dr. Robert Malone, who participated in the original development of mRNA technology, is absolutely right to conclude that “there must be accountability” for what is increasingly seen as a genocidal disaster. People are dying from the misuse of experimental mRNA drugs and disastrous government policies that are pitted against populations. ⁃ TN Editor

A seasoned stock analyst colleague texted me a link today, and when I clicked it open, I could hardly believe what I was reading.  What a headline.  “Indiana life insurance CEO says deaths are up 40% among people ages 18-64”.  This headline is a nuclear truth bomb masquerading as an insurance agent’s dry manila envelope full of actuarial tables.

People frequently write to Jill and myself. People we have never met.  They call, they arrive at the farm by appointment or unannounced, they fill our email in boxes with their inquiries. They all want something; time, attention, an interview.  Many want to tell us about their fear, illness, nightmares, or (what often seems like) outright paranoid conspiracies.  And then, over time, these fears and “conspiracies” keep getting confirmed.  As Jan Jekielek (a senior editor with The Epoch Times) recently said to me, it is getting harder and harder to tell which ones are mere conspiracy theories and which are true reality.

One farm visitor told me of his foreshadowing massive numbers of deaths within three years consequent to the genetic vaccines, and that this was all about the “Great Reset” and the depopulation agenda of the World Economic Forum (WEF).  I tried to reassure him that, in my opinion, this was highly unlikely- while privately thinking about how easily people fall into this type of conspiracy ideation, and how I need to be careful to avoid going there when confronting so many public health decisions that appear either incompetent or nefarious.  At the time, I only knew of the WEF as the host of a big annual party in Davos Switzerland where the uber rich and the hoi oligoi of the Western nations went to watch Ted talks, drink the best wine, see and be seen.  Silly me.  What a long, strange trip this has been.  I doubt that even Hunter S. Thompson could have imagined it in his most drug and booze addled state.  Suffice to say, I nominate Ralph Steadman as official illustrator of the SARS-CoV-2 pandemic.  Or a resurrected Hieronymus Bosch.

But I am wandering from a point that I am afraid to clearly state.

It is starting to look to me like the largest experiment on human beings in recorded history has failed.  And, if this rather dry report from a senior Indiana life insurance executive holds true, then Reiner Fuellmich’s “Crimes against Humanity” push for convening new Nuremberg trials starts to look a lot less quixotic and a lot more prophetic.

Here is what lit me up in this report from The Center Square contributor Margaret Menge.

“The head of Indianapolis-based insurance company OneAmerica said the death rate is up a stunning 40% from pre-pandemic levels among working-age people.

“’We are seeing, right now, the highest death rates we have seen in the history of this business – not just at OneAmerica,’ the company’s CEO Scott Davison said during an online news conference this week. ‘The data is consistent across every player in that business.’

OneAmerica is a $100 billion insurance company that has had its headquarters in Indianapolis since 1877. The company has approximately 2,400 employees and sells life insurance, including group life insurance to employers in the state.

Davison said the increase in deaths represents ‘huge, huge numbers,’ and that’s it’s not elderly people who are dying, but ‘primarily working-age people 18 to 64’ who are the employees of companies that have group life insurance plans through OneAmerica.

‘And what we saw just in third quarter, we’re seeing it continue into fourth quarter, is that death rates are up 40% over what they were pre-pandemic,’ he said.

So, what is driving this unprecedented surge in all-cause mortality?

“Most of the claims for deaths being filed are not classified as COVID-19 deaths,

Davison said.“What the data is showing to us is that the deaths that are being reported as COVID deaths greatly understate the actual death losses among working-age people from the pandemic. It may not all be COVID on their death certificate, but deaths are up just huge, huge numbers.””

Take a moment to read the entire article.  Now.  Then let’s continue on, assuming that you have.

AT A MINIMUM, based on my reading, one has to conclude that if this report holds and is confirmed by others in the dry world of life insurance actuaries, we have both a huge human tragedy and a profound public policy failure of the US Government and US HHS system to serve and protect the citizens that pay for this “service”.

IF this holds true, then the genetic vaccines so aggressively promoted have failed, and the clear federal campaign to prevent early treatment with lifesaving drugs has contributed to a massive, avoidable loss of life.

AT WORST, this report implies that the federal workplace vaccine mandates have driven what appear to be a true crime against humanity.  Massive loss of life in (presumably) workers that have been forced to accept a toxic vaccine at higher frequency relative to the general population of Indiana.

FURTHERMORE, we have also been living through the most massive, globally coordinated propaganda and censorship campaign in the history of the human race.  All major mass media and the social media technology companies have coordinated to stifle and suppress any discussion of the risks of the genetic vaccines AND/OR alternative early treatments.

IF this report holds true, there must be accountability.  We are not just talking about running over the first amendment of the Constitution of the United States and grinding it into the mud with an army of artificial intelligence-powered heavy infantry. This article reads like a dry description of an avoidable mass casualty event caused by a mandated experimental medical procedure. One for which all opportunities for the victims to have become self-informed about the potential risks have been methodically erased from both the internet and public awareness by an international corrupt cabal operating under the flag of the “Trusted News Initiative”. George Orwell must be spinning in his grave.

“…if this report holds and is confirmed by others in the dry world of life insurance actuaries, we have both a huge human tragedy and a profound public policy failure of the US Government and US HHS system to serve and protect the citizens that pay for this “service”. Dr. Malone, I so love and appreciate you and yours for standing up and speaking the truth, for accepting the immoral and sometimes illegal pushback from various so-called authorities (LOL) around the world, for taking their censorship and ridicule as dished by the FakeSM and giving it back. In all, so… Read more »

[…] >Failed Gov’t Policies Plus Failed mRNA Shots Spell Disaster – We are living in the most massive, world wide coordinated propaganda and censorship campaign in the history of the human race.  All major mass media and the social media technology companies are coordinated to stifle and suppress any discussion of the risks of the genetic vaccines AND/OR alternative early treatments. SHORT READ HERE […]

This comment is for Patrick Wood. Mr. Wood, I can’t find the article now but I believe it was you who listed your protocol for increasing immunity and associated. it looked excellent. I follow PLCCC protocol https://covid19criticalcare.com plus other common sense. One thing I reviewed in my Gigging instruction was the importance of melotonin – something they discovered 5o years ago that men working on high powered electrical for a living had lowered levels of melotonin and higher incidents of cancer – electricity destroys melotonin. Your body needs melotonin to fight cance, to produce stem cells. The other vastly important… Read more »