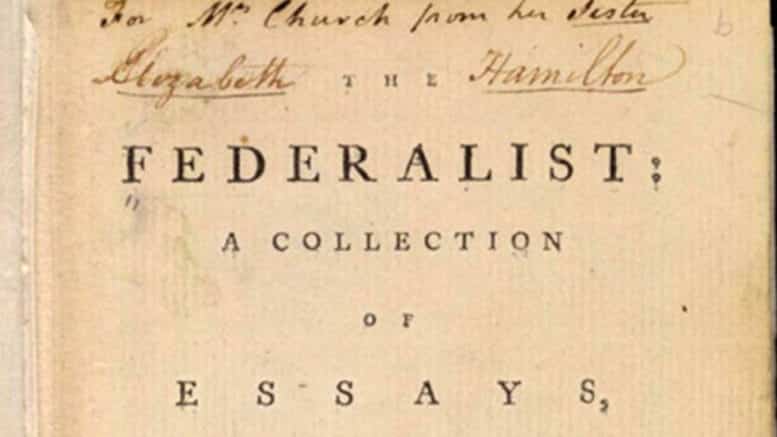 Even when good ideas are presented, invariably someone appears to use them for their own self-aggrandizement, leaving the original intent and potential benefits behind. Only by constant vigilance can an idea stay true to its origin. ⁃ TN Editor

The midterm election is the most important since the creation of the US. There is a choice between successful or failed economic policies. Yes, it is that, but it is more profound because of what happens to ideas after implementation. The battle is the classic one seen throughout history between an idea, such as the one envisioned by the Founding Fathers, and the vain self-promoters who pervert the idea through control.

Everything starts with an idea, whether it is a new widget, a religion, or a country. Every year millions of ideas appear, but few ever develop into anything. The people select the ones that do if it fits their needs, satisfies their interests or improves their lives. A new phase must begin after the idea is accepted if it is to achieve wider success. An organization is necessary that takes the idea and spreads it to the world.

A classic example is the idea of Christianity. It wasn’t long before disciples appeared and travelled widely preaching the gospel and putting the idea in a written form that became the New Testament. Some of those ideas were leveraged into the creation of the Catholic Church.

“The Roman Catholic Church sees Peter as the first pope upon whom God had chosen to build His church (Matthew 16:18). It holds that he had authority (primacy) over the other apostles. The Roman Catholic Church maintains that sometime after the recorded events of the book of Acts, the Apostle Peter became the first bishop of Rome, and that the Roman bishop was accepted by the early church as the central authority among all of the churches.”

Some disagree with this version. It doesn’t matter. What is important is that they created a structure called the Catholic Church with a human being in charge. This structure gradually grew, creating rules and positions inconsistent with the original idea of Christianity. It rapidly changed to ensure its existence and control. The self-promoting narcissists were in charge. The structure they created was rigid, but the world and society are dynamic and ever-changing. It eventually becomes so misaligned that it collapses taking the society down with it. Alternatively, the people revolt.

The drift of the Catholic Church was already evident with such things as the split in the Great Western Schism when two popes were elected, one in Avignon, France and the other in Rome. The division became so apparent that by 1517 Martin Luther (1483-1546) was driven to nail a list of the transgression to the Wittenberg Cathedral door.  The structure always becomes more important than the idea, unless a system is designed to prevent it.

The only serious attempt in history to do that was with the US Constitution, and the Declaration of Rights created by the Founding Fathers. The original idea was for a Republic with government at all levels elected and accountable to the people. We have direct insight into the thoughts behind their creation known as the Federalist Papers.

You can understand their importance when you recall the real issue in the appointment of Justice Brett Kavanaugh. When asked what he considered when making a judgment, he replied, the law as written, and precedence, that is previous judgments that stood the test of time. They then asked if he ever considered the reasoning behind the law; that is, what the legislators were thinking or what was their intent. He replied that most judges do that only helps to clear up ambiguity.

America is at the point where it must refer to the Federalist Papers. There is very little ambiguity in the Constitution, primarily because the Founding Fathers created a system of amendments to overcome rigidity. Amendments are deliberately and correctly difficult to obtain. The need to revisit the Constitution is made necessary by the creation of a rigid, unaccountable structure by the self-promoting elitists. The Founding Fathers tried to build in accountability by having more positions filled by elections than ever before, but there is an obvious limit to that idea, especially since the government has grown exponentially.

This is the critical issue at the heart of the battle between Trump and both other branches of the tripartite system. Today’s bureaucrats are mostly technocrats who control everything including their budgets, the size of their organization and the parameters of their responsibility. Here is a small example of the exploitation of such a system that I witnessed. A Captain was appointed the head of the motor pool on my base. He immediately asked for 25 more people because of work demands. The uninformed politicians agreed but said he could only have 12. That was precisely what he wanted because it increased the pool to a size that the rules required a Major in charge. As soon as he got the ruling, he applied for promotion.

“When all government, domestic and foreign, in little as in great things, shall be drawn to Washington as the center of all power, it will render powerless the checks provided of one government on another.” –Thomas Jefferson

“Wherever the real power in a Government lies, there is the danger of oppression.” –James Madison

“Where an excess of power prevails, property of no sort is duly respected. No man is safe in his opinions, his person, his faculties, or his possessions.” –James Madison

“The moment the idea is admitted into society that property is not as sacred as the laws of God, and that there is not a force of law and public justice to protect it, anarchy and tyranny commence. If ‘Thou shalt not covet’ and ‘Thou shalt not steal’ were not commandments of Heaven, they must be made inviolable precepts in every society before it can be civilized or made free.” –John Adams

“In the first place, it is to be remembered, that the general government is not to be charged with the whole power of making and administering laws: its jurisdiction is limited to certain enumerated objects, which concern all the members of the republic, but which are not to be attained by the separate provisions of any.” –James Madison

“If it be asked, what is the most sacred duty and the greatest source of our security in a Republic? The answer would be, an inviolable respect for the Constitution and Laws — the first growing out of the last.” –Alexander Hamilton

“As riches increase and accumulate in few hands, as luxury prevails in society, virtue will be in a greater degree considered as only a graceful appendage of wealth, and the tendency of things will be to depart from the republican standard. This is the real disposition of human nature.” –Alexander Hamilton

All of these concerns were accentuated and exploited by former President Barack Obama and continued by the radical left. The talent of the Founding Fathers centered on their unblinkered understanding of human nature. Benjamin Franklin demonstrated this ability when he described Barack Obama 300 years ago.

“Here comes the orator! With his flood of words, and his drop of reason.”

“To take from one, because it is thought his own industry and that of his fathers has acquired too much, in order to spare to others, who, or whose fathers, have not exercised equal industry and skill, is to violate arbitrarily the first principle of association, the guarantee to everyone the free exercise of his industry and the fruits acquired by it.” –Thomas Jefferson

Will the unique idea of America survive the attacks and deliberate undermining, now so deeply entrenched by technocrats? They dragged the nation away from the original idea. Now, the people must know the original idea and intent. There is a glimmer of hope in the survival of the idea of Christianity: Despite the destructive actions of the Catholic Church, Christianity survives, protected from the meddling of man, in the heart and soul of the individual. The idea of the US is also there in the American people as Trump showed, which is why the narcissistic left is so blinded by hate.