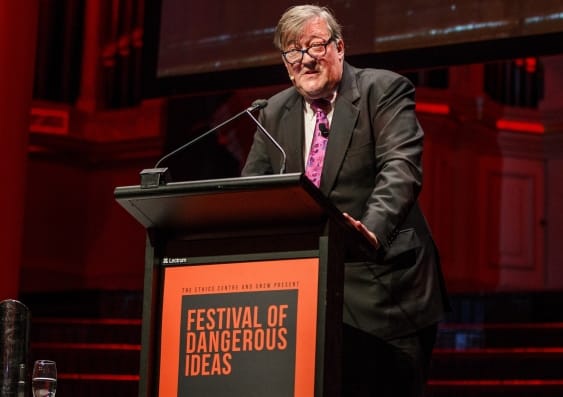 Stephen Fry presented the keynote address of the Festival during a whirlwind visit. Photo: Yaya Stempler

Technocrat Toby Walsh spoke on the future of AI: “Society shapes technology and technology can shape society.” Technocracy is all about social engineering, or shaping society, into man’s image. AI is not the solution to the world’s “wicked” problems. ⁃ TN Editor

What will happen in the next sexual revolution? When will machines become smarter than humans? The Festival of Dangerous Ideas, presented this year for the first time in conjunction with UNSW, asked some fascinating questions.

The first year of UNSW’s Centre for Ideas co-presenting the Festival of Dangerous Ideas with The Ethics Centre is deemed an overwhelming success.

Ann Mossop, Director of the Centre for Ideas and co-curator of the Festival of Dangerous Ideas, says the Festival is all about bringing ideas to public audiences in a fresh and engaging way.

“This is very much the mission of the Centre for Ideas and goes to the heart of the University’s strategy of social engagement. The Festival also values freedom of expression, independent thought and open debate, which are core values for the University.”

To help spark that debate, the Festival invited leading thinkers from around the world, including Romanian-American New York Times correspondent Rukmini Callimachi, who delves deeply into ISIS and is well known for her podcast Caliphate; Chuck Klosterman, American author and essayist who focuses on pop culture; and Germaine Greer, who has been expounding dangerous ideas for some decades.

One speaker – Stephen Fry – made a whirlwind trip to Sydney of less than 48 hours to deliver his keynote “The Hitch”, an homage to his friend Christopher Hitchens who delivered the opening address at the first Festival of Dangerous Ideas in Sydney in 2009.

Local leading thinkersdrawn from the UNSW community had the opportunity to reach a wider and different audience at the Festival, and numerous events were aligned with UNSW’s Grand Challenge topic of Living with Technology in the 21st Century.

Toby Walsh, Scientia Professor of Artificial Intelligence, for example, predicted 2062 as the date when AI will match human intelligence, and raised the accompanying issues of data manipulation and the ethics of killer robots.

Scientia Professor Rob Brooks, from the School of Biology, Earth and Environmental Sciences and Director of the Evolution & Ecology Centre, suggested sexbots could be the next sexual revolution, making us more relaxed about sex. He also warned us to beware the free sexbot and its implications.

This is the first year the Festival has been held on Cockatoo Island, and Ms Mossop says it makes it into a different kind of event.

“Rather than dipping into the Festival, most people came for an extended session and enjoyed different speakers, as well as the art installations and just being on the island. It made it more lively, because they saw speakers they didn’t already know and immersed themselves in the Festival experience.

“The program of cabaret, art, talks, ethics workshops and unique environment made for very rich experiences. Stephen Fry was amazing at the Town Hall, and our speakers on the island really delivered. [Social media activist and former Westboro Baptist Church member] Megan Phelps-Roper made a huge impression on audiences, [British historian] Niall Ferguson is a truly extraordinary speaker and Toby Walsh unleashed a drone.  What more can you ask for?”

The Festival was at capacity, with tickets for the island events and Stephen Fry at the Sydney Town Hall sold out.

The Centre for Ideas team and UNSW Events were supported by 130 UNSW mostly student volunteers over the two days, while the Social Media team extended the Festival reach – the event hashtag  #fodi was trending in the top 5 on Twitter throughout the day.