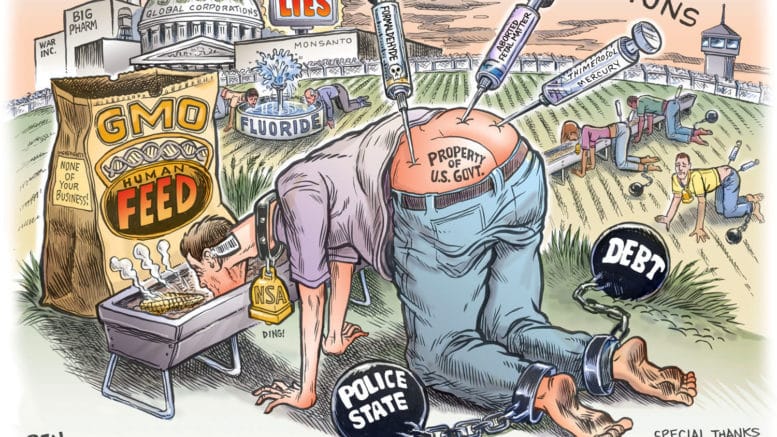 Please Share This Story!
PDF 📄
Big Pharma is a perfect example of Technocrats gone wild as they have taken control of the government agencies that are supposed to protect the population from harmful medical products.

Furthermore, one finds that Big Pharma works closely with the United Nations to find justification on controlling other countries around the world as well.

Be sure to listen to Patrick Wood’s related podcast on this story.

How many of you remember reading about the Ministries of Love, Peace, Plenty, and Truth in George Orwell’s dystopian novel, 1984? If we were to create another ministry today, it would be the Ministry of Pharma. And that ministry has plans for you through promising health while delivering disease. While the majority of Americans waltz through the motions of their daily lives, Big Pharma hijacked our political system to skirt laws and has helped to roll out its omniscient vaccine agenda.

The ominous program will be more than one size fits all. It will consist of a top-down, full-blown compliance program, force-feeding vaccines to all regardless of age, gender, or infirmity. As always, safety will be cast aside while pharma tramples individual rights and everyone’s health. The fascist plan is being created today within by our national leaders without public discussion.

The vaccine manufacturers realize that cajoling politicians to write and pass mandatory vaccination legislation takes time. In the current climate, messy court fights ensue that may reach the US Supreme Court. The vaccine producers needed another way to secure full, unobstructed compliance for all: it will be the 2020 National Vaccine Plan (NVP), a federal program being fast-tracked into action after nearly a decade of development.

Big Pharma has long been laying out its TriPOD strategy, “Trial Point of Dispensing,” which was introduced through a FEMA drill staged on Pier 92 in lower Manhattan the day before 9/11. The plan is about streamlining the distribution of medicine during a terrorist attack. In the event of a real emergency – or false flag event – TriPOD will focus on the dispensing, tracking, and monitoring compliance which could include indefinite quarantine.

Last month, HHS posted a public notice on its website regarding the 2020 National Vaccine Plan Request for Information. It gave the general public a short nine (9) days to post comments.

The notice read (in part):

“For nearly a decade, the National Vaccine Plan (NVP) has served as the nation’s leading roadmap for enhancing all aspects of the U.S. vaccine and immunization system. To ensure the NVP remains nimble to the evolving vaccine and immunization landscape, the US Department of Health and Human Services (HHS) is leading the development of the 2020 National Vaccine Plan. The updated plan will reflect immunization across the lifespan and guide priority actions for the period 2020-2025.”

What HHS has never disclosed is how deeply the pharmaceutical industry has been involved in every step to develop this plan to force conformity and ensure vaccine uptake.

The 2020 National Vaccine Plan will ultimately lead to the elimination of rights, control of information, and compliance through technology. One piece of national legislation,  introduced by Frederica Wilson (D-FL) in 2019, proposed mandatory vaccination for children (the adult’s bill will come next year).

Connected to mandatory vaccination are bills to eliminate individual and national sovereignty. Two separate bills were introduced in 2019 that, if passed, would be an infringement on American sovereignty. The first is HR 654 “Supporting the United Nations Sustainable Development Goals.” Introduced in October 2019 by Congresswoman Barbara Lee’s (D-CA), this is an update of a bill she introduced in 2017, HR 1111, “Department of Peacebuilding Act.” While the names of both bills sound noble, the word ‘sustainable’ is sprinkled throughout the proposed law.

Sustainable development is code for globalism. The Sustainability Movement is a unipolar, fascist dictate that 193 nations signed and adopted at the 2015 United Nations General Assembly. At that congress, they announced the arrival of the Agenda 2030, the plan to change the world. All 193 countries sacrificed their sovereignty and gave away their power to foreign, unelected officials and lifer bureaucrats at the U.N.

Sounds crazy, right? It gets worse. Massive, uncontrolled migration of ethnic groups across borders will turn the developed world upside-down. Europe has been experiencing the fall out of unstructured immigration with Sweden and Germany most visibly seeing the errors of these open-border policies.

The lofty language in Agenda 2030 is a wolf in sheep’s clothing. If the US Constitution, the executive branches of government and the Bill of Rights can be circumvented and then totally eliminated, America will be forced to join the global climate change groupthink. The climate cabal share the same destructive vision for humanity as vaccine pushers: depopulate the world.

In 2006, University of Texas ecologist Eric Pianka told a meeting of the Texas Academy of Science that 90 percent of human beings must die in order to save the planet. As reported on Reason.com:

In his estimation, 6.5 billion humans is too many. Pianka feels “we’ve grown fat, apathetic and miserable,” all the while leaving the planet parched. His solution? A 90 percent reduction in the total population. His favorite candidate for eliminating most of humans from the earth is releasing an airborne Ebola (Ebola reston), because it is both highly lethal and it kills in days, instead of years.

A letter, signed by more than 11,000 scientists from around the world, claimed Earth is facing a “climate emergency” predominantly caused by human activities. The scientists concluded that far fewer humans could save the planet.

This goes along with the assertions made by Swedish scientist, Magnus Söderlund from the Stockholm School of Economics, whose comments were reported in September’s The National Review. He suggested that climate change may “pave the way for cannibalism.” This bizarre concept was bleated out during an AOC town meeting by a woman who screamed, “We have got to start eating babies.”

Vaccines are the lead soldiers in the global plan to “thin the herd.” And as mandatory legislation rolls through the state legislatures, few understand that at some point, pharma will get tired of fighting skirmishes in the 46 remaining states with exemptions. The iron hand will be raised to order mandates from above, and slam them through with federal legislation.

Beyond eliminating rights and mandating vaccines for all, Big Pharma’s game plan, with help from the UN, WHO, HHS, and CDC, includes the absolute control over information. By next year, information control could be nearly complete, riding on the backbone of technology. Such control will be more than CDC talking points and pharma propaganda. It will lead to the elimination of open debate and the censorship of opinions and free speech.

By completely controlling the narrative, pharma can promote the “vaccines are safe and effective” propaganda unchallenged. Dissenters will be silenced. Book sales killed. Facebook posts blocked. Twitter posts shadowbanned and followers deleted. Google searches and critical rankings will be manipulated and buried. Negative remarks in the comment sections of online publications deleted. All to disseminate lies. Big Pharma’s information control will weaponize social media so that even mild discussions about vaccines, such as Bill Maher’s interview last week with Dr. Jay Gordon, will not be allowed.

The reach of Pharma extends beyond the list above. The vaccine deep state has also forced email hosts and other tech companies to stop doing business with those who don’t follow Big Pharma’s script. At their own discretion, the medical and pharma deep state have decided THEY are the TRUTH and have labeled everything else that challenges this premise as “fake news.”

Just over the horizon looms an even larger and more ominous danger. The social credit scoring system will (soon) be coming to America, straight out of Communist China. This futuristic program, designed by Big Tech (Google), Big Data (see Sidewalk Labs) and other cooperative parties, intends to end independent thought and quash non-conformist behavior.

Here’s a brief explanation of the Social Credit Score System, from Forbes:

Once enacted, a low social credit score could block access to travel, bank loans, and insurance, or could even block your ability to buy a car.

Most people know intel agencies can track the movements of individuals via their cell phone, even when the device is turned off. The 2020 NVP plans to work in concert with the WHO’s ID-2020 program. The implementation of ID-2020 will be insidious, similar to the Orwellian takeover of the formerly free lives of American citizens. This includes an alliance between Big Pharma, Microsoft, GAVI, and Bill Gates eugenics philanthropy which includes the use of vaccination to microchip each recipient.

The rollout of 5G networks will come with an array of 5G high altitude drone platforms (already in testing) and a global 5G satellite grid that, once fully deployed, will be able to track every human on earth.

Big Pharma is nothing other than old Egyptian god worship. No kidding. It explains the worship of satan these days and the overall sickness of this world. Example Nova Nordisk for diabetes (diabetes is a side effect of the poison food we eat, your being sacrificed!) Their logo and all the logos of the big pharma and food monopoly’s. https://en.wikipedia.org/wiki/Asclepius Nova Nordisk’s own website: https://www.novonordisk.com/about-novo-nordisk/facts-and-figures/our-logo.html and Here: https://www.ask-aladdin.com/egypt-gods/hathor/ and the gods renamed saints:https://en.wikipedia.org/wiki/Patron_saints_of_ailments,_illness,_and_dangers We are not allowed to talk about the God of the Bible, the One and only God. “They provoked Him (God) to jealousy with strange gods, with… Read more »

I want to add that I am forced to go to the doctor once a year whether I want to or not, Just like I was forced into Obama care. And when I go they try to force me into vaccines, blood tests, and a host of other so called precautionary procedures. They try to force cholesterol meds, high blood pressure meds and the list is endless. If you refuse they treat you like your crazy, they don’t like it, even get angry. But I refuse. I trust in the one and only God of the Bible. If he wants… Read more »

In a similar situation, my local “clinic” recommended a Statin drug and I declined. There was no basis to recommend Statins in the first place and the person recommending was only a “nurse practitioner” who looked about 25 years old. When I checked my records online the next day, my chart pointedly stated, “Patient refused treatment.” Needless to say, I never set foot in their office again.

Yes in my Dr’s office is also a nurse practitioner. I have to go whether I want to or not. I have asthma. They will refuse to refill my prescription if I don’t make an appointment. Is that not called blackmail?

What ever happened to “My Body, My Choice” ?

That only works if you are a woman who wants to get an abortion. All others are excluded.

Catherine Grady wife of Tony Fauci in 1985 has 2 sisters and 2 brothers. Joanne Grady Huskey wife of State Department James Huskey son of Dow Huskey. John H. Grady III lawyer at Jones Day who settles big environmental cases for the DoD. Barbara Grady Ayer who is a writer in California and maybe the most important ROBERT E. GRADY 1957 who was in both Bush administrations. Robert Grady went to Harvard and was an editor of the Crimson and most likely in the OWLS. I suspect this because of his relationship with Richard Darman, who went to Harvard just… Read more »