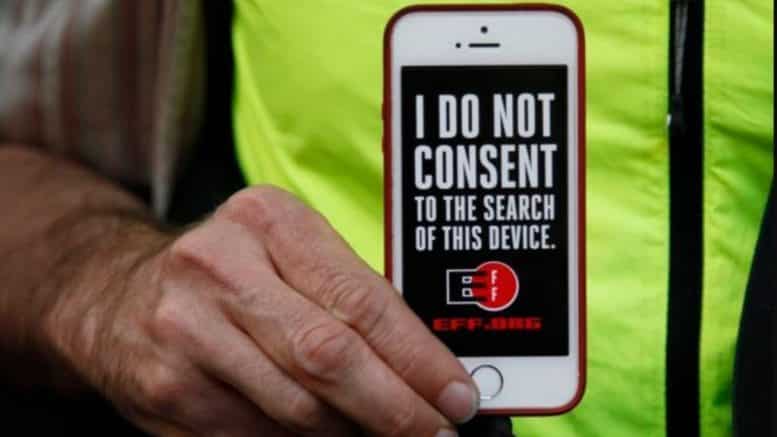 Please Share This Story!
PDF 📄
Technocrats in government agencies that conduct warrantless   electronic searches will undoubtedly be grinding their teeth over this ruling that will force them to honor the Fourth Amendment that protects citizens from unlawful search and seizure. ⁃ TN Editor

In a major victory for privacy rights at the border, a federal court in Boston ruled today that suspicionless searches of travelers’ electronic devices by federal agents at airports and other U.S. ports of entry are unconstitutional.

The ruling came in a lawsuit, Alasaad v. McAleenan, filed by the American Civil Liberties Union (ACLU), Electronic Frontier Foundation (EFF), and ACLU of Massachusetts, on behalf of 11 travelers whose smartphones and laptops were searched without individualized suspicion at U.S. ports of entry.

“This ruling significantly advances Fourth Amendment protections for millions of international travelers who enter the United States every year,” said Esha Bhandari, staff attorney with the ACLU’s Speech, Privacy, and Technology Project. “By putting an end to the government’s ability to conduct suspicionless fishing expeditions, the court reaffirms that the border is not a lawless place and that we don’t lose our privacy rights when we travel.”

“This is a great day for travelers who now can cross the international border without fear that the government will, in the absence of any suspicion, ransack the extraordinarily sensitive information we all carry in our electronic devices,” said Sophia Cope, EFF Senior Staff Attorney.

The district court order puts an end to Customs and Border Control (CBP) and Immigration and Customs Enforcement (ICE) asserted authority to search and seize travelers’ devices for purposes far afield from the enforcement of immigration and customs laws. Border officers must now demonstrate individualized suspicion of illegal contraband before they can search a traveler’s device.

International travelers returning to the United States have reported numerous cases of abusive searches in recent months. While searching through the phone of Zainab Merchant, a plaintiff in the Alasaad case, a border agent knowingly rifled through privileged attorney-client communications. An immigration officer at Boston Logan Airport reportedly searched an incoming Harvard freshman’s cell phone and laptop, reprimanded the student for friends’ social media postings expressing views critical of the U.S. government, and denied the student entry into the country following the search.