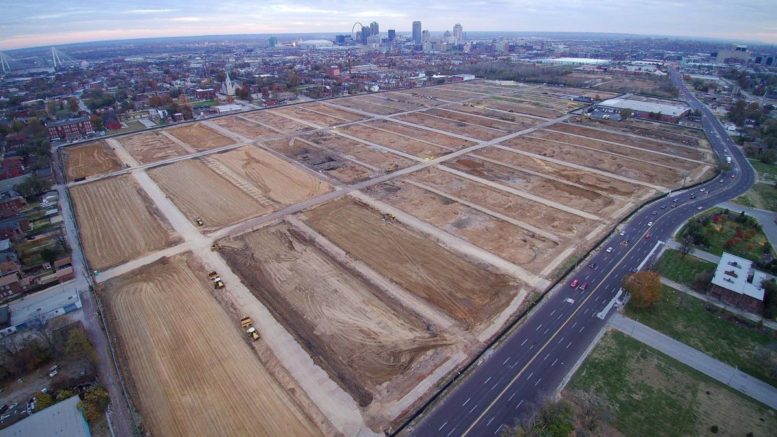 Please Share This Story!
PDF 📄
The NGA answers to the Office of Director of National Intelligence and is charged with tracking everything that moves on planet earth. It is the ultimate in total surveillance in order to ‘master the human domain’. ⁃ TN Editor

City officials announced Friday that they had finalized the transfer of 97 acres north of downtown to the federal government for the construction of the National Geospatial-Intelligence Agency’s $1.7 billion western headquarters, capping nearly four years of work assembling the site for one of the city’s largest economic development projects in decades.

“We’re all excited. We are thankful for all the help along the way from both the public and private sector and a great deal of support from the state of Missouri,” said St. Louis Development Corp. Director Otis Williams, who shepherded the project for the city first under former Mayor Francis Slay and now Mayor Lyda Krewson. “This was a huge undertaking. It’s a sigh of relief to get it all done.”

City officials fought hard for years to retain the NGA, which employs some 3,100 people in a facility on the Mississippi riverfront near the Anheuser-Busch brewery. Friday’s announcement is a major milestone in a project that even as recently as this summer appeared potentially at risk.

The official transfer will happen in the coming weeks as top officials complete documents and agreements. This spring, the Army Corps of Engineers, which is overseeing the construction, plans to pick a general contractor from three finalists. Construction could start by late 2019, with the facility’s completion anticipated in 2024 or 2025.

Since the NGA decided in 2016 to build on the city’s north side, St. Louis has spent more than $114 million to buy hundreds of properties, build a new facility for an industrial laundry company, demolish buildings, clear the landand grade it. There have also been legal costs for eminent domain for those owners who didn’t wish to sell, and last-minute court tussles over the summer with the developer and bank that started the whole project, Paul McKee and the Bank of Washington.

The complex financing relied on strong support from the Missouri Department of Economic Development, which started under former Gov. Jay Nixon and into the current administration, and bond underwriting professionals at Stifel, Williams said.

The costs will ultimately be repaid with city earnings taxes and state income taxes from the NGA employees, a worthwhile expense, officials say, for a major project in an area that needs investment and a far better alternative than losing the jobs, as initially feared.

As the federal intelligence agency looked for a site to build a headquarters for its second-largest facility, St. Louis officials were up against counterparts in St. Clair County, who offered an open field ready for development near Scott Air Force Base as an alternative.

“When it first came up, it was looked at as a long shot,” Williams said. “I was told many times that you guys don’t have a chance. I told folks that we were in this to win it. We went all out.”

Ultimately, NGA leaders indicated a desire to stay in the urban core as a way to recruit tech talent and attract private companies that support the agency’s mission. That, coupled with what some saw as the Obama administration’s commitment to urban renewal, allowed the city to retain the facility despite the daunting task of buying out dozens of property owners and clearing land that had held generations of residents.

In a statement, NGA Director Robert Cardillo called it a “historic day.”

“Building upon our history in St. Louis, the new campus in North City will enable NGA to deliver our mission through the end of the century and beyond,” he said. “We look forward to continue teaming with the talent and innovation of the St. Louis region.”

Development in the area would be the most significant project in memory on the city’s North Side, which has long struggled from disinvestment.

Mayor Lyda Krewson pointed to the planned facility’s proximity to downtown, area universities and the Cortex tech district, which will help grow the cluster of geospatial and mapping technology jobs in the region that support and are supported by the NGA’s workforce and contractors.

“NGA is like any other employer, and their goal is to attract and retain talent,” she said. “What we’re looking to do through the startup community, the tech community, is to support the businesses in the area and the residents in the area to make sure there’s good development in and around the area.”