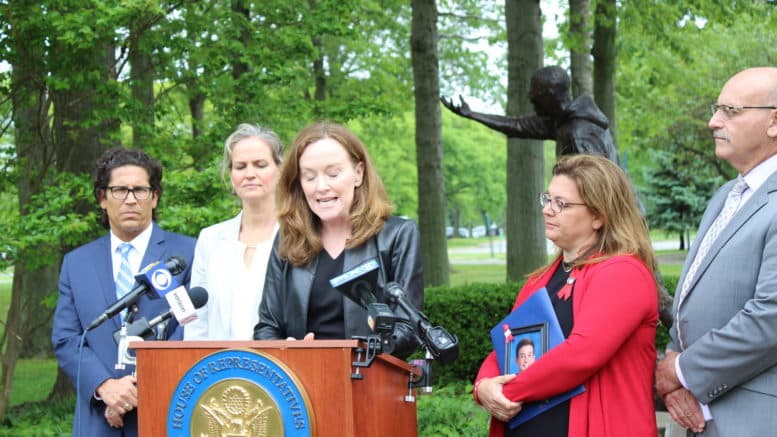 Progressive liberal Democrat Rep. Kathleen Rice (D-NY) introduced two bills that have serious Constitutional implications. Her bills will encourage law enforcement into a police-state mentality that will be impossible to undo. ⁃ TN Editor

If you thought the TAPS Act was bad, wait until you read this.

Our politicians are hard at work introducing bills that promise to turn America into a mirror image of China.

According to the LI Herald, Rice wants to force auto manufacturers to put breathalyzers and ignition interlock devices in new cars by 2029.

“The End Drunk Driving Act would mandate that, within 10 years, all cars sold nationwide come equipped with technology that would detect a driver’s blood alcohol content and prevent the vehicle from moving if it is above the legal limit.”

With close to 280 million cars in the U.S. and over 226 million drivers licenses, nearly every American would be affected by this and other bills.

If Rice’s bill is passed it would effectively turn 226 million people into suspects.

(a) In General.–Not later than 10 years after the date of enactment of this Act, the Secretary shall issue a final rule prescribing or amending a Federal motor vehicle safety standard that would prevent operation of a motor vehicle when the operator is under the influence of alcohol. The standard–

(1) shall prevent the operation of the motor vehicle if the operator’s blood alcohol content is above the legal limit; and

(2) shall require such technology to be–

(A) reliable and accurate;

(B) set at the legal limit;

(E) functionary in extreme environments (both hot and cold); and

If Rice’s bill becomes law, then motorists in Utah, who have consumed one alcoholic beverage would not be allowed to drive.

As I reported last year, at least six states are considering criminalizing consuming one alcoholic beverage. Earlier this year, Michigan expressed their desire to do the same, bringing the total to seven states.

Rice’s plans for law enforcement and accused drunk drivers will leave your head spinning in disbelief.

Rice’s H.R. 7099 bill, otherwise known as the Prevent Impaired Driving Child Endangerment Act would force anyone convicted of a DWI with a child in the car, to undergo a mental health assessment.

The LI Herald states that every state would force law enforcement to give drivers mental health assessments or lose federal funding.

“Offenders would also be required to undergo an alcohol, substance abuse and mental health assessment and receive treatment if necessary. The case would be added to state child abuse registries and states that fail to comply could have certain federal funding withheld by the U.S. Secretary of Transportation.”

Rice’s claim that only motorists who have been convicted of DWI will be given mental health assessments is a lie. Why? Because it is already happening.

For the past three years, Police officers in Texas have been giving everyone they arrest, a mental health assessment.

“Once at jail, anyone who is arrested will be screened for mental illness. The jail will send those results to judges to consider when setting bond. The county will also start using a risk assessment tool to arrive at an estimated level of danger and flight risk posed by each defendant.”

H.R. 7099 would turn America’s police into psychologists with unimaginable powers.

“(i) requires the individual, if convicted of the offense, to undergo an alcohol abuse, substance abuse, or mental health assessment; and

“(ii) if the assessment indicates a need for treatment, authorizes the appropriate court (or monitoring agency) to require the individual to undergo treatment as part of the individual’s sentence in connection with the conviction or as a condition for reissuance of a State driver’s license to the individual.

And if that wasn’t bad enough, Rice’s bill would turn drunk drivers into instant child abusers.

Turning people into instant child abusers for having one alcoholic beverage or being judged mentally unfit by law enforcement is appalling.

The TAPS Act, the End Drunk Driving Act and the Prevent Impaired Driving Child Endangerment Act are all indicators that America is headed down a dark and dangerous road.

If you want to buy a simple truck, no computer, no GPS, no carpet, no auto windows, etc., lets say for an employee vehicle you cannot. We use to buy company pick-ups that were stripped of these things because lets say in logging the truck could get destroyed in a week, or in Construction. These rules are being set up so that no one will escape. So this system may later include owner identification the rulers of this world might say to prohibit car theft, and in the case of this article drug driver’s, and men who don’t pay child… Read more »

What does the owner of the roads want to do about this?

Sounds like a very expensive proposition for car makers. Doubt they will agree without a fight. If there is a fight the public will be alerted.