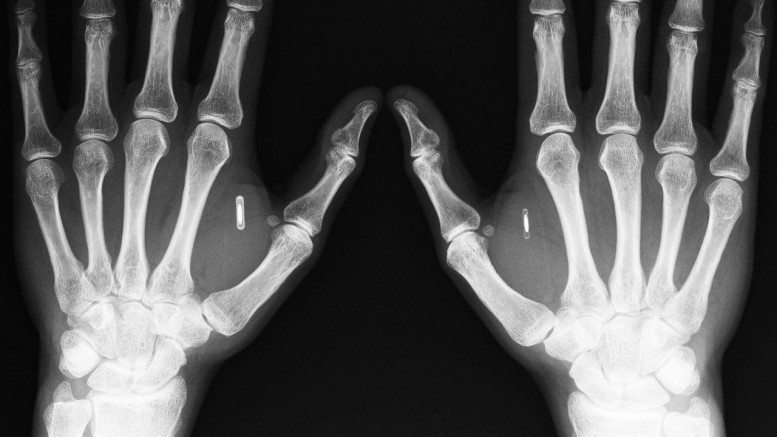 TN Note: It is seductive technology for some even as others are driven to invent it. In a Technocracy economic system, RFID implants will be a ubiquitous way to track and monitor every human activity, which is the life-blood of a scientific dictatorship.

Tim Shank can guarantee he’ll never leave home without his keys. Why? His house keys are located inside his body.

Shank, the president of the Minneapolis futurist group TwinCities+, has a chip installed in his hand that can communicate electronically with his front door and tell it to unlock itself. His wife has one, too.

In fact, Shank has several chips in his hand, including a near field communication (NFC) chip like the ones used in Apple Pay and similar systems, which stores a virtual business card with contact information for TwinCities+. “[For] people with Android phones, I can just tap their phone with my hand, right over the chip, and it will send that information to their phone,” he says. In the past, he’s also used a chip to store a bitcoin wallet.

Shank is one of a growing number of “biohackers” who implant hardware ranging from microchips to magnets inside their bodies.

Some biohackers use their implants in experimental art projects. Others who have disabilities or medical conditions use them to improve their quality of life, while still others use the chips to extend the limits of human perception. Shank, for instance, has experimented with a portable distance sensor that vibrates a magnet in his hand; it’s like a sonar system that lets him sense how far away obstacles are. He also considered installing a chip that would track his body temperature. But not every use case is so ambitious—for some, the chips are merely convenient ways to store data and unlock doors.

Experts sometimes caution that the long-term health risks of the practice are still unknown. But many biohackers claim that, if done right, implants can be no more dangerous than getting a piercing or tattoo. In fact, professional body piercers are frequently the ones tasked with installing these implants, given that they possess the training and sterilization equipment necessary to break people’s skin safely.

“When you talk about things like risk, things like putting it in your body, the reality is the risk of having one of these installed is extremely low—it’s even lower than an ear piercing,” claims Amal Graafstra, the founder ofDangerous Things, a biohacking supply company.

Graafstra, who is also the author of the bookRFID Toys, says he first had an RFID chip installed in his hand in 2005, which allowed him to unlock doors without a key. When the maker movement took off a few years later, and as more hackers began to explore what they could put inside their bodies, he founded Dangerous Things with the aim of ensuring these procedures were done safely.

“I decided maybe it’s time to wrap a business model around this and make sure that the things people are trying to put in their bodies are safe,” he says. The company works with a network of trained body piercers and offers online manuals and videos for piercers looking to get up to speed on the biohacking movement.