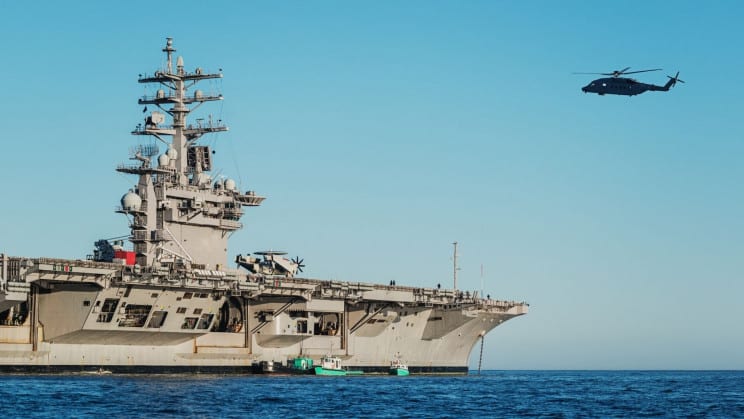 Please Share This Story!
PDF 📄
This is not a battlefield weapon as much as it is for simple crowd control. It has the potential for egregious violations of free speech and human rights if used by governments to suppress dissent. Technocrats invent because they can, not because of a demonstrated need to do so.  ⁃ TN Editor

The U.S. Navy has successfully invented a special electronic device that is designed to stop people from talking. A form of non-lethal weapon, the new electronic device effectively repeats a speaker’s own voice back at them, and only them, while they attempt to talk.

It was developed, and patented back in 2019 but has only recently been discovered, according to a report by the New Scientist.

The main idea of the weapon is to disorientate a target so much that they will be unable to communicate effectively with other people.

Called acoustic hailing and disruption (AHAD), the weapon is able to record speech and instantly broadcast it at a target in milliseconds. Much like an annoying sibling, this action will disrupt the target’s concentration, and, in theory, discourage them from continuing to speak.

It is important to note that the device is unlikely to be used on the battlefield anytime soon and will probably be used as a form of crowd control.

AHAD has been developed by engineers at the Naval Surface Warfare, Crane Division, a Navy research, and development facility in Indiana that develops handheld and crew-served weapons for the service.

As for the technical details of the device, a quick review of its patent is very interesting indeed.

“According to an illustrative embodiment of the present disclosure, a target’s speech is directed back to them twice, once immediately and once after a short delay. This delay creates delayed auditory feedback (DAF), which alters the speaker’s normal perception of their own voice. In normal speech, a speaker hears their own words with a slight delay, and the body is accustomed to this feedback. By introducing another audio feedback source with a sufficiently long delay, the speaker’s concentration is disrupted and it becomes difficult to continue speaking.”

If you want to see the thing in action, the patent filing handily also includes a sort of promotional video of another device that works in a similar way.

I was disoriented by “disorientate”.

the echoing you get in phones sometimes is the closest thing you
can compare the annoyance with i assume..because when the echoing starts
you actually do not want to continue any further.
Interesting!

The video is nine years old… Couldn’t be patented in 2019, if it had been disclosed years earlier.

What will they think of next?

New Navy Weapon Can Literally Stop You From Talking. These people are absolutely bonkers – David Icke

[…] Read more: New Navy Weapon Can Literally Stop You From Talking. These people are absolutely bonkers […]

New Navy Weapon Can Literally Stop You From Talking. These people are absolutely bonkers – HNMDA Buitenland

[…] Read more: New Navy Weapon Can Literally Stop You From Talking. These people are absolutely bonkers […]

It may work with English cultures (debatable) but there are some cultures I guarantee it wouldn’t work with. My Italian in-laws, for example, regularly speak over each other and, it seems, almost never pay any attention to the conversation they’re hearing anyway.

From the headline, I had pictured an inverse-sound (noise cancelling) weapon that would literally cancel the sounds coming from a person or crowd. That would have been truly dangerous as it would make it impossible to speak.

This was an hilarious remembrance. I was reared with the same relatives and they were not Italian–East Texas drama queens/kings. I don’t believe I had a single real or complete conversation when growing up. Everyone talked at once and no one really listen to the other. Crazy.

This is not big news really, although it appears TPTsB are attempting to make it so for the fear factor, if nothing else. The device of which the article speaks has been in operation for quite a while by the military. This may be a refined version but it’s not new. There are ways around it as well. Sign language anyone? FYI–can be paired with a powerful magnet for disabling the human chipping process TPTsB have so openly discussed over the last decade.

This will finally make my wife to stop talking 24 hrs/day with her endless demands.

Well folks, it’s coming and Bank Of Canada has a job posting
https://careers.bankofcanada.ca/job/Ottawa-%28Downtown%29-Product-Architect%2C-CBDC-ON/547470817/