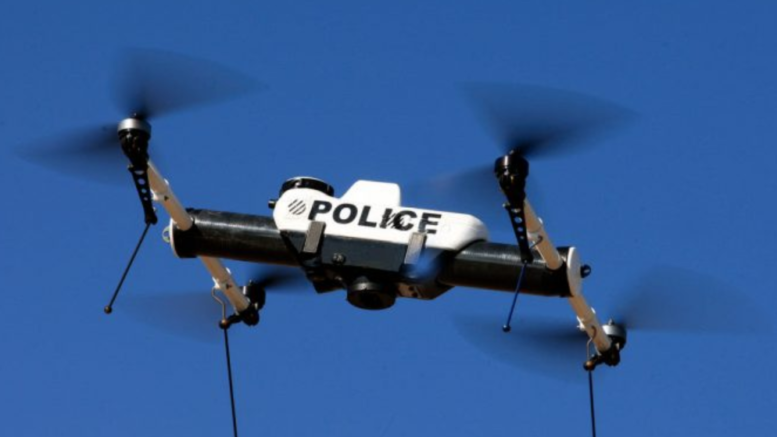 Please Share This Story!
PDF 📄
Human nature is the same across all societies and civilizations. Thus, American officials are potentially just as likely to want to control people as Chinese officials. In this case, it is ironic that Chinese drones are being used to curtail a Chinese virus on American soil. ⁃ TN Editor

Police in Elizabethtown, N.J., are using drones to spy on citizens in areas patrol cars cannot reach. Authorities claim the drones are not taking pictures or collecting evidence, but failure to comply with their orders could lead to a summons or $1,000 fine.

Even worse, the drones come from a Chinese company that sent similar drones across the country — and the Department of Homeland Security (DHS) has warned that data collected on these Chinese-owned drones could be compromised and sent back to Beijing.

“The drones make it easier for police to see into certain areas where access by patrol cars is more difficult. That includes tight spaces between buildings, behind schools, and backyards,” an MSNBC anchor explained in a segment on Friday. “Failure to comply could lead to a summons or a thousand dollar fine.”

“It’s just an invasion of your privacy,” a local man told MSNBC.

J. Christian Bollwage, the city’s mayor, responded to the criticism by insisting that the drones could save lives.

“My answer to those people is, ‘If these drones save one life, it is clearly worth the activity and the information that the drones are sending,'” Bollwage said.

“The drones, donated by DJI, a Chinese company, have gone to 43 agencies in 22 states, all to help enforce social distancing rules,” MSNBC reported. “Authorities say the drones aren’t taking pictures or collecting evidence. It’s a high-tech warning against a daily virus.”

Elizabeth Harrington, a spokeswoman for the Republican Party, shared a video of the segment.

“US using Chinese drones to spy on and lecture Americans about a virus caused by communist China,” she tweeted.

DHS warned that Chinese-made drones may be sending sensitive flight data back to their manufacturers in China, where the Communist Party-dominated government can access it. The DHS sent an alert last May warning about the drones, almost a year before American mayors decided to use DJI drones to enforce social distancing measures to fight the coronavirus.

According to CNN, nearly 80 percent of the drones used in the U.S. and Canada come from DJI, which is headquartered in Shenzhen, China.

“The United States government has strong concerns about any technology product that takes American data into the territory of an authoritarian state that permits its intelligence services to have unfettered access to that data or otherwise abuses that access,” the alert stated. “Those concerns apply with equal force to certain Chinese-made (unmanned aircraft systems)-connected devices capable of collecting and transferring potentially revealing data about their operations and the individuals and entities operating them, as China imposes unusually stringent obligations on its citizens to support national intelligence activities.”

Now if there was a time to repurpose that old microwave oven into something more…interesting. I’d say this would be the time.

Additionally, masks can cause health problems, and forgeddaboutit if you have COPD, or Asthma.

It’s a coup
Reply to  grimfandango

What virus? It’s a psyop to destroy nations to make it easy for the globalists to take over. No one, to date, has been able to find any evidence that this alleged virus exists. It’s as fraudulent as the Presidential selection we just had. It’s a mind virus.