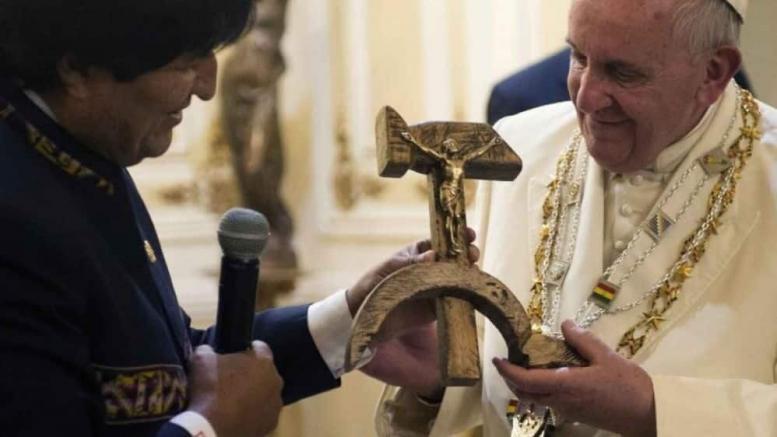 Please Share This Story!
PDF 📄
Some Catholics consider Pope Francis to be a Marxist, but he is using his position and organization to orchestrate the entire planet into full-blown Sustainable Development, aka Technocracy.

In his sponsorship of a March 2020 economic summit, “Economy of Francesco”, Francis calls for a “different kind of economy”, “new economy” and Sustainable Development.

In Laudato Si’, the word “sustainable” was used 21 times to convince readers that UN-style Sustainable Development, aka Technocracy, holds the future of the world. However, in a true application of the Hegelian Dialectic, Francis attacks the “Technocratic Paradigm” by stating “The technocratic paradigm also tends to dominate economic and political life.”

The author of the following article only sees Marxism, but readers of Technocracy News & Trends understand that Marxism is only the necessary stepping-stone to Technocracy and not the end in itself. This was originally postulated by Zbigniew Brzezinski in his 1970 book, Between Two Ages: America’s Role in the Technetronic Order.  ⁃ TN Editor

As if there needs to be further evidence that the current occupant of St. Peter’s Chair in Rome is a Marxist, the announcement of an upcoming conference at Assisi entitled the “Economy of Francesco” should convince any skeptic otherwise.

In his invitation letter to “young economists and entrepreneurs worldwide,” Bergoglio sets the agenda for the Leftist confab quite clearly which is virulently anti-market, a call for massive redistribution of wealth, and a reordering of the current economic systems of the world with a healthy dose of climate change nonesense:

. . . a different kind of economy: one that brings life not death, one that is inclusive and not exclusive, humane and not dehumanizing, one that cares for the environment and does not despoil it.*

While Bergoglio’s Marxist credentials have been firmly established, his blashemous  actions and words has a growing number outside of “sedevacantist circles” calling him a heretic.  The legitimacy of “Pope Francis,” however, is more fundamental than him being a manifest heretic, but his standing as a legitimate pope is invalid since his ordination as a priest and his consecration as a bishop came under the new rites of Holy Orders instituted in the wake of the Second Vatican anti-Council (1962-1965).

The mastermind behind Bergoglio’s summit is professor Luigino Bruni and from his comments he sounds more radical than the Argentine Apostate, if that is possible.  Professor Bruni wants to use taxation as a weapon to “redistribute income and wealth from the rich to the poor.”*

Bruni, a professor of political economy at the Italian University, LUMSA, and the author of a number of books, basis his advocacy for redistribution of wealth on the Scriptures:

[T]he Bible has many words to offer our economic life and ideas [with] the transformation of wealth into well-being.**

It appears that the good professor’s Bible is missing the Seventh Commandment of the Decalogue which solemnly states: THOU SHALL NOT STEAL!  In no legitimate commentary ever written on this Commandment is there an exception made for the confiscation of wealth from the well-to-do to be given to the poor.  Probably just an oversight on the Professor’s part.

Because they are blinded by socialistic ideology, Bruni, Bergoglio, and the likes of Bernie Sanders cannot see that the growing wealth inequality which they complain about is not the result of “capitalism,” but is the outcome of the monetary policy of the world’s central banks.  This, along with tax policies which hamper innovation and shield the entrenched financial class from competition, is why financial elites are able to maintain and increase their power.

Central bank policy of suppressing interest rates and of money printing allow banks and financial institutions to receive “free money” which they can invest and speculate with at zero cost.  The boom (actually a bubble) in asset prices on Wall Street is a demonstration of how wealth disparity takes place.

If Bergoglio really meant to reform the present system, he would call for the abolition of central banking and a return to “hard money.”  Under such an order, banks and financial institutions become wealthy on their ability to make prudent investment decisions subjected to profit and loss.  A free market in banking is the antithesis of the current system of credit expansion and money printing.

Not only have Bergoglio and his cohorts abandoned the Faith, but they have also overturned the Church’s long-held condemnation of socialism and have ignored many of its own outstanding thinkers on financial matters.  From the Scholastics to the School of Salamanca through the Jesuits and the great Cardinal Cajetan, who finally taught the proper doctrine on interest rates, the Church has produced scores of eminent economic thinkers in its long history.

Ever since socialism reared its ugly head as a social system of thought, the Church has warned of its dangers even its more milder forms as Pope Pius XII wrote, “No Catholic could subscribe even to moderate socialism.”  Since Vatican II and especially under Bergoglio’s regime, however, Leftist ideas of all sorts have been warmly embraced.

At the heart of socialism, be it Marxism or its equally pernicious variants, lies envy which became a part of the human condition with the fall of man.  While once condemned, envy has been turned into a virtue by the likes of Bergoglio.

While such ideas may sound appealing to human sensibilities, they will not pass the Divine Judge who knows the thoughts and souls of all His creatures even those of supposed popes.

He is a false prophet. He is aligning all religions to the Vatican. This “New Economy” is a One World Government, you know when the state owns everything? The Vatican believes people should not own their own property, it belongs to the ‘collective’. He does have power and influence through concordats: https://en.wikipedia.org/wiki/Concordat

Those entities that manage and control the Vatican’s purse-strings have come to dictate the pope’s selection and Vatican policy; Sound familiar?

People just don’t know what they are in for. They don’t know how much power this wicked man has. He is a Jesuit. He has Papal infallibility that is, he is preserved from the possibility of error! He has Papal supremacy and he is the Vicar on earth. You understand he takes the place of Christ. But they worship another Christ. The whole world is brainwashed. It’s so sad. Revelation 17 is about that church, ‘And upon her forehead was a name written, MYSTERY, BABYLON THE GREAT, THE MOTHER OF HARLOTS AND ABOMINATIONS OF THE EARTH’ Rev. 17:5 The pope… Read more »

Pope Francis will be the last Pope.

12 For we wrestle not against flesh and blood, but against principalities, against powers, against the rulers of the darkness of this world, against spiritual wickedness in high places.

It don’t get much higher than Vatican City..!