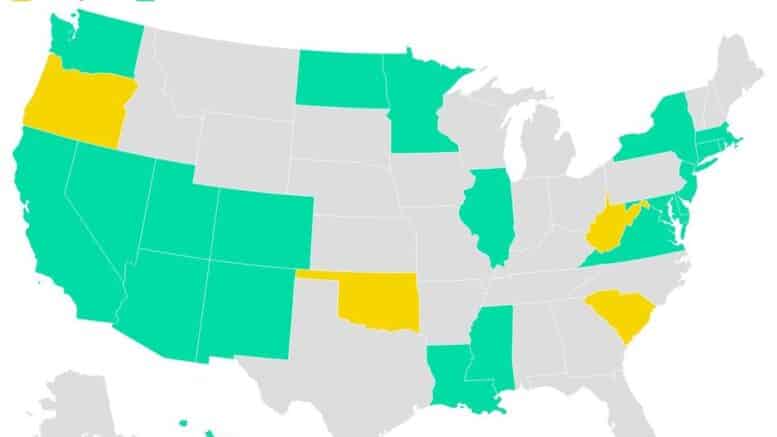 Please Share This Story!
PDF 📄
While the all-distracting war rages in Ukraine, Technocrats at home are sneaking in a system of national vaccine passports with the disingenuous carrot that “Having digital access to personal health records empowers the individual.”

The polar opposite is true. The data collectors are empowered while those from whom the data is extracted are tracked, analyzed and manipulated.

It is likely not state legislatures letting this in, but rather the state governors and their respective health departments. ⁃ TN Editor

Even as the omicron variant loosens its grip on the world, destinations continue to require travelers to show proof of vaccination. And, increasingly, a paper CDC vaccination card is not cutting it.

While the United States government has not issued a federal digital vaccine pass, a national standard has nevertheless emerged. To date, 21 states, the District of Columbia and Puerto Rico offer accessibility to the SMART Health Card, a verifiable digital proof of vaccination developed through the Vaccination Credential Initiative (VCI), a global coalition of public and private stakeholders including Microsoft, Salesforce, Oracle, the Mayo Clinic and other health and tech heavyweights.

And very soon, at least four more states will be rolling out access to SMART Health Cards. “We’ve seen a notable uptick in states that have officially launched public portals where individuals can get verifiable vaccination credentials in the form of SMART Health Cards with a QR code,” says Dr. Brian Anderson, co-founder of the VCI and chief digital health physician at MITRE.

There is already an impressively widespread availability of SMART Health Cards in the U.S. More than 200 million Americans can now download, print or store their vaccination records as a QR code. When the QR code is pulled up, only the individual’s name, date of birth and vaccination information is visible. No other medical information or personal data is shared. This code is also digitally signed to ensure that the card was issued from a verified location and to prevent forgery.

For individuals, the benefits of having access to personal digital vaccine record is three-fold. First, it’s a huge plus for travel in the U.S. and abroad.

Many indoor cultural attractions and performance venues in the U.S. require proof of vaccination. “We believe it gives people peace of mind when the folks around them are unlikely to be contagious,” says Gus Warren, CEO of Bindle, a health verification app that allows venues to verify the vaccination status of patrons.

Bindle’s growing list of clients spans more than 30 states, from blue strongholds like California and New York to red leaners like Texas, Florida, Arkansas, Missouri and Georgia. At the Kennedy Center in Washington, D.C., for example, there’s a Bindle lane that offers fastpass-like efficiency in scanning QR codes from a number of vaccine verification platforms used around the world.

“The SMART Health Card is such an important development and the Vaccine Credential Initiative has been phenomenal in getting this out there,” says Warren, noting that while Bindle recognizes several interoperable standards, the SMART Health Card has emerged as the most important. “Absolutely, it has become the standard across the U.S. and North America.”

“And at an international level, we are continuing to see intense interest in a coordinated international approach,” says Anderson. “And that has not diminished at all. I think quite the opposite.”

To wit: Every Canadian province has now adopted SMART Health Card verification, as has Aruba, the Cayman Islands, Singapore and Japan. And in Africa, the SMART Health Card has rolled out in Kenya and Rwanda, just the first of 32 African countries in the “Smart Africa” alliance to adopt a digital-first approach to healthcare records.

The Case For Red States

The second argument for adopting a digital vaccine verification system is the one swaying red-state governors: Having digital access to personal health records empowers the individual.

More than a dozen states have launched their own SMART Health Card-based portals. At least seven others — including Arizona, Mississippi and West Virginia — have turned to a third-party, MyIRMobile, to issue SMART Health Cards. Minnesota has chosen Docket, another third-party option.

“This isn’t a passport,” South Carolina’s director of immunizations told Politico. “This is essentially a Covid card that people get at their convenience because it’s their record.”

THIS MUST BE REVERSED AT ANY PRICE.

Boy, that’s all we need more lose of privacy.

” This isn’t a passport” … they forgot the word “yet” on the end of that sentence. A classic example of “Creeping Globalism”. I predict that by 2030 or perhaps sooner you will not be allowed to blow your nose without a Health card.

“…when the folks around them are unlikely to be contagious,” WHY do people think this applies to the vaccinated???? The PR on this piece of complete rubbish has been hard core for something that just isn’t true!

This is total bullchit for the worlds biggest human experiment for a virus, that was a hoax from the start!
Just say NO!

This is not a health card is a CONTROL card.

I can’t say what I ‘ really want to say. I’m sure imagination will suffice. Living within 2 hours of a bigger city ( that is totally under ICLEI) I have already opted- out of 2 places that I would love to take my granddaughter to. They arent requiring vaccines ‘ yet but are requiring masks ( their animals are testing positive). Dear Lord the insanity and stupidity is beyond the beyond and I’m sure some of it can be attributed to the deteriorating mental health of those who havealready been jabbed. There is an event I would love to… Read more »

Why The Vaccine Pass Will Not Disappear - Europe Reloaded

Why The Vaccine Pass Will Not Disappear – Anywhere – debtstop

[…] that ‘Having digital access to personal health records empowers the individual,’” writes Patrick Wood, editor in chief of Technocracy.news and an expert of global technocracy and privacy […]

[…] that ‘Having digital access to personal health records empowers the individual,’” writes Patrick Wood, editor in chief of Technocracy.news and an expert of global technocracy and privacy […]

They must have not seen the latest independent study from the Swiss, findings of altered DNA and causing autoimmune hepatitis.

[…] that ‘Having digital access to personal health records empowers the individual,'” writes Patrick Wood, editor in chief of Technocracy.news and an expert on global technocracy and privacy […]

[…] passport” — rolled out (5) in roughly half the country thus far, including in red states that previously had paid lip service to banning vaccine […]