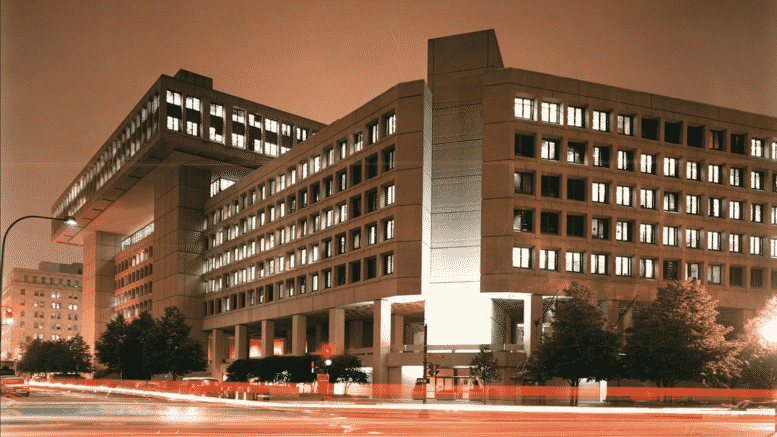 Please Share This Story!
PDF 📄
The FBI spits in the face of Congress by willfully and knowingly ignoring violating clearly documented laws. Furthermore, use of the FBI to conduct such searches has increased by 250% under the Biden Administration. To say that the FBI has been weaponized against the American is an understatement. ⁃ TN Editor

Top House Republicans are demanding answers from the FBI after court-ordered information came to light showing that the federal agency had collected the information of over 3 million Americans without a warrant.

In a May 25 letter to FBI Director Christopher Wray, Reps. Jim Jordan (R-Ohio) and Mike Turner (R-Ohio) asked Wray to explain why his agency had wiretapped and gathered personal information on over 3.3 million Americans without a warrant (pdf).

Specifically, section 702 of the bill says: “the Attorney General (AG) and the Director of National Intelligence (DNI) may jointly authorize the targeting of (i) non-U.S. persons (ii) who are reasonably believed to be outside of the United States (iii) to acquire foreign intelligence information.”

However, this power can grant an expanding circle of possible searches to the FBI and other intel agencies, who can use the same power against American citizens who had any interaction with targeted foreigners.

Historically, insight into how FISA has been used against American citizens has been limited and hidden behind classified reports.

However, a November 2020 decision by the Foreign Intelligence Surveillance Court (FISC)—which serves as a watchdog for U.S. intelligence agencies—required that the Office of the Director of National Intelligence (ODNI) report “the number of U.S. person queries run by the FBI against Section 702-acquired information.”

In total, queries against U.S. citizens came out to a jaw-dropping 3,394,053 searches. By comparison, only 1,324,057 such queries were made in 2020, representing around a 250 percent increase during President Joe Biden’s first year in office.

According to ODNI more than half of these queries—approximately 1.9 million—were part of the larger investigation of alleged Russian attempts to target or weaken U.S. critical infrastructure.

The ODNI report also admitted that on at least four occasions, the FBI failed to get FISC approval before accessing the contents of information collected under section 702.

This is not the first time the FBI has been caught red-handed overstepping its legal authority under section 702.

In November 2020, the FISC announced that “the government … reported numerous incidents” in which the FBI reviewed information gathered under section 702 without obtaining proper permission from the court.

The charter-less (no Congressional charter or Constitutional provision) FBI still runs under the spirit of the late John Edgar Hoover, a cross-dressing homosexual high-ranking member of the Masonic Order. So, in plainer terms, the Devil runs the FBI, and most, if not all, the rest of DHS as well. Has it gotten too big for the populace of this land to eliminate?

How about we file a class action against them?

You would have to establish that you were one of the victims of illegal wiretapping and that you therefore have standing to sue. Additionally, since the government and its agencies are generally “immune” from lawsuits, it can be more difficult to file a class action lawsuit against a government agency. The whole system needs to be reformed as one of the principal checks on the power of the federal government found in the US Constitution was the notion of enumerated powers. That is, the federal government can only exercise those powers specifically spelled out in the Constitution, and any power… Read more »

Report: FBI Spied On 3.3 Million Americans Without A Warrant - All View News