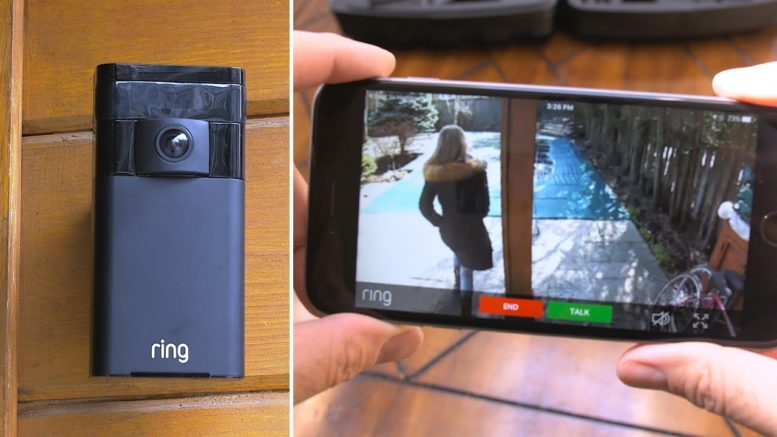 Please Share This Story!
PDF 📄
Amazon owns Ring and has sole million of the camera-embedded cameras to homeowners nationwide. Next, it offered the surveillance to police forces in every community. So far, 400 police forces are signed up.

Homeowners are snitching on people who may or may not be evil-doers, putting entire neighborhoods at risk for privacy violations. It’s one thing to film someone who is on your property, but quite another to film someone walking or driving by on the street. ⁃ TN Editor

The doorbell-camera company Ring has quietly forged video-sharing partnerships with more than 400 police forces across the United States, granting them access to homeowners’ camera footage and a powerful role in what the company calls America’s “new neighborhood watch.”

The partnerships let police automatically request the video recorded by homeowners’ cameras within a specific time and area, helping officers see footage from the company’s millions of Internet-connected cameras installed nationwide, the company said. Officers don’t receive ongoing or live-video access, and homeowners can decline the requests, which are sent via emails that thank them for “making your neighborhood a safer place.”

The number of police deals, which has not previously been reported, will likely fuel broader questions about privacy, surveillance and the expanding reach of tech giants and local police. The rapid growth of the program, which launched last spring, surprised some civil-liberties advocates, who believed fewer than 300 agencies had signed on.

Ring officials and law-enforcement partners portray the vast camera network as an irrepressible shield for American neighborhoods, saying it can assist police investigators and protect homes from criminals, intruders and thieves.

“The mission has always been making the neighborhood safer,” said Eric Kuhn, the general manager of Neighbors, Ring’s crime-focused companion app. “We’ve had a lot of success in terms of deterring crime and solving crimes that would otherwise not be solved as quickly.”

But legal experts and privacy advocates have voiced alarm over the company’s eyes-everywhere ambitions and increasingly close relationship with police, saying the program could threaten civil liberties, turn residents into informants and subject innocent people, including those who Ring users have flagged as “suspicious,” to greater surveillance and potential risk.

“If the police demanded every citizen put a camera at their door and give officers access to it, we might all recoil,” said Andrew Guthrie Ferguson, a law professor and author of “The Rise of Big Data Policing.”

By tapping into “a perceived need for more self-surveillance and by playing on consumer fears about crime and security,” he added, Ring has found “a clever workaround for the development of a wholly new surveillance network, without the kind of scrutiny that would happen if it was coming from the police or government.”

Looks like this will be a great tool to turn in Christians and Jews into the authority’s who won’t follow/worship the new global leader to come. He will be the ultimate Hitler, and claim to be a god, even the ‘Christ’. I wish more people could see what truly is happening, I truly do.