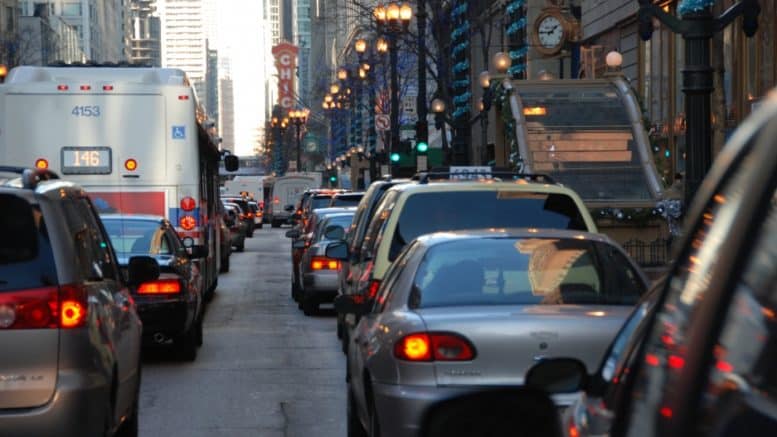 Please Share This Story!
PDF 📄
The sales-pitch for self-driving cars is that it will decrease urban congestion. Apparently, the developers and marketers of self-driving cars never thought it through, or if they did, they just lied about it. ⁃ TN Editor

Self-driving cars will likely jam up downtown streets by cruising at slow speeds rather than parking, according to a new analysis published in the journal Transport Policy. Using game theory and simulated traffic models, report author Adam Millard-Ball found that the vehicles will be incentivized to circle streets rather than pay for parking.

According to Millard-Ball’s model, even as few as 2,000 self-driving cars in downtown San Francisco could slow traffic to less than 2 miles per hour.

Millard-Ball, an associate professor of environmental studies at the University of California at Santa Cruz, compared the situation to drivers moving slowly at airport pickups. “Drivers would go as slowly as possibly so they wouldn’t have to drive around again,” he said in a statement. “Unless it’s free or cheaper than cruising, why would anyone use a remote lot?”

While there’s optimism that autonomous vehicles (AVs) could solve traffic problems by driving more efficiently and coordinating with other vehicles and infrastructure, the study also shows that the peculiarities of self-driving cars could create more problems. Not only did Millard-Ball determine it would be cheaper for the cars to not park, he found that moving at slower speeds was even more cost-effective, factoring in the costs of electricity, depreciation and maintenance. The cars, he said “will have every incentive to create havoc.”

Other analyses have found that AVs would generate more traffic simply by putting more cars on the road. An analysis by the World Economic Forum and the Boston Consulting Group found that people replacing transit trips with autonomous vehicle rides would mean a 5.5% increase in travel times in downtown Boston (in outer neighborhoods, the analysis projected less congestion because people would rely on shared AVs rather than personal vehicles). The BBC reports that a 2017 British government study also found AVs would increase congestion in the short term.