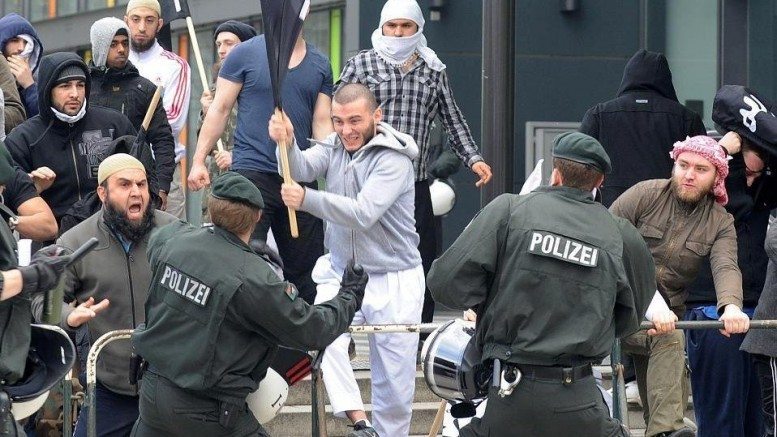 The incredulous open-border policy being practiced in Europe is the same policy being exercised in the United States. Not only is our southern border with Mexico virtually wide-open for anyone to sneak into our country illegally, but Obama’s Executive Branch cabal is importing tens of thousands of immigrants from countries in the mideast that are known terrorist hotspots.

In Europe’s case, it can no longer turn back. It’s too late and too much damage has already been done. It’s time to say, at least mentally, “Goodbye Europe, it was nice knowing you.”

Just a few years ago, Europe was a wonderful place to visit, vacation in and do business with. What changed?

For starters, the global elite that took credit for the creation of the European Union in the first place have now decided to throw the whole morass under the bus. Hear the crunching sound!

It was Trilateral Commission co-founder David Rockefeller himself who said in 1998,

Rockefeller was being modest. In 2002, it was Trilateral Commission member Vallery d’Estaing who actually authored the EU’s constitution when he was President of the Convention on the Future of Europe.

Well, energies of current members of the Trilateral Commission (and their globalist cronies) have switched field. They are now pushing and enforcing policies that are turning Europe into a train wreck.

Enter Mr. Peter Sutherland, former Chairman of Goldman Sachs International, Chairman of BP, Director-General of the World Trade Organization and Honorary Chairman of the Trilateral Commission. He has been serving as the United Nations Special Representative of the Secretary-General for International Migration since 2006.

Sutherland has been outspoken on unlimited immigration policy in Europe. He has stated publicly,

“The United States, or Australia and New Zealand, are migrant societies and therefore they accommodate more readily those from other backgrounds than we do ourselves, who still nurse a sense of our homogeneity and difference from others.

“And that’s precisely what the European Union, in my view, should be doing its best to undermine.”

Let’s not stop there. at the peak of the European crisis in late 2015, Sutherland wrote,

Sutherland believes that immigration is the key to implementing Sustainable Development, an economic model which I have carefully documented as Technocracy from the 1930s. (See Technocracy Rising)  This is what the Trilateral Commission first alluded to in 1973 as its “New International Economic Order”.

Oh, did I mention that if Sustainable Development (Technocracy) is to replace Capitalism and Free Enterprise that the latter must be utterly destroyed? Yes, you read it right, but don’t just take my word for it…

Listen to the words of Christiana Figures, the former Executive Secretary of the United Nations Framework Convention on Climate Change:

“This is the first time in the history of mankind that we are setting ourselves the task of intentionally, within a defined period of time to change the economic development model that has been reigning for at least 150 years, since the industrial revolution… This is probably the most difficult task we have ever given ourselves, which is to intentionally transform the economic development model, for the first time in human history”. (Figueres, Feb. 2015 press conference) [emphasis added]

Let’s examine this statement. The United Nations has:

We should not be surprised at this turn of events.

If the West is to be deconstructed in order to make way for Technocracy, what better way to do it than with a mass invasion of radical Islamic jihadists, crazed on the Marxist philosophy of social justice and who don’t care if they die in a hail of gunfire, as long as they cause mayhem and destruction while doing so.

It’s the age-old program of rape, pillage and plunder, modernized and codified in religious terms that justifies its actions.

So, is Europe being ‘thrown under the bus’ by its creators? Yes, and the evidence is clear.

What is the payoff? Technocracy as an economic system and Scientific Dictatorship as a model of societal governance.

Coming soon to a continent near you…

Doesn’t this paint a picture of man’s miserable condition where God has no place in the lives of people and our nations. But God tells us most assurdedly “Though a sinner do evil an hundred times, and his days be prolonged, yet surely I know that it shall be well with them that fear God, which fear before him” and “There is a vanity which is done upon the earth; that there be just men, unto whom it happeneth according to the work of the wicked; again, there be wicked men, to whom it happeneth according to the work of… Read more »