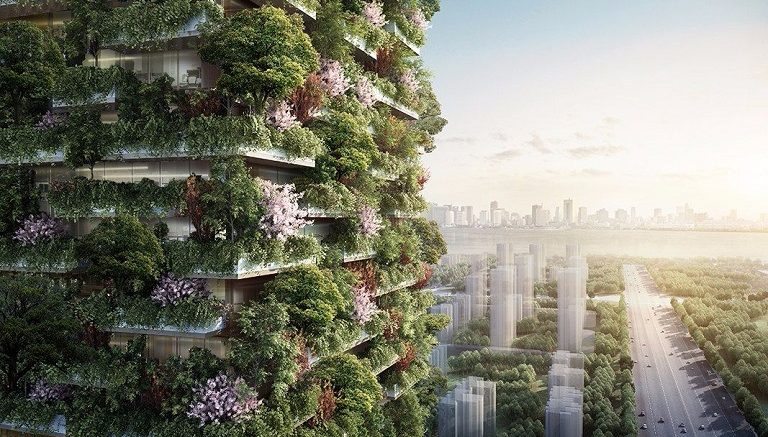 An Italian architect named Stefano Boeri has convinced Chinese Technocrats that the answer to their pollution is to build vertical forest buildings where plants, shrubs and trees are rooted on patios.

The Nanjing Green Towers will be finished in 2018 and will be outfitted with 1,100 trees and 2,500 cascading plants and shrubs. Nanjing is one of China’s most polluted cities.

The payback for all this effort? The 650 feet tall building will produce 132 pounds of oxygen per day while converting 136 pounds of CO2. However, oxygen is the most abundant element in the earth’s crust, and at current rates, 132 pounds of O2 is worth about $12 when purchased in bulk.

Similar buildings are already being constructed in Milan and Losanna, Switzerland.

There is no doubt that such buildings will make a dramatic visual appearance when first built, but the maintenance costs will far outweigh any potential pollution offsets.

Sophisticated gardens require continual labor for pruning, fertilizing, replacing dead plants, hauling refuse, etc. Since dense plant growth blocks out light, the interior of the buildings will require more electricity for artificial light. If birds take a liking to the greenery, then there will be bird nests, droppings, lice, etc.

As plant material naturally sheds to the streets and sidewalks below, imagine the continual piles of debris that will need to be swept up and carted away.

As yet sight unseen, China is already considering building additional vertical forest buildings in other polluted cities like Chongqing, Guizhou, Shanghai and Shijiazhuang, all in the name of its “war on pollution” that was declared in 2014.

Ironically, China pictures itself as a global leader in Sustainable Development and global warming activism, but they are actually disconnected from reality. Money spent on projects like this could easily provide clean coal burning technology that would cut down on pollution in the first place. 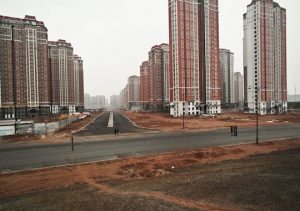 China is notorious for other spurious building projects such as entire ghost cities. MIT Technology Review estimates that there could be as many as 50 entire cities that have been built but remain essentially empty.

Why would they think such building projects will bring success? The answer is simple: Technocrats do not reason the same way as other people. Their idea of an engineered society is “if you build it, they will come.” When people don’t come, they blame the people instead of themselves.

China has boasted that its economy grows at 10-12 percent per year, but with building habits and results like these, we can see very little, if any, value in these figures. We can, however, get a better understanding of Technocrat thinking throughout the world, namely, that they are disconnected from reality.

This is the goal of elite technocracy….you will be assimilated.

I sort of like the concept, but being an organic gardener, I would. I can say from experience that all of the problems listed can be turned into advantages. Done right, by people who care and want to live in such an environment, it will work. Attempted by a centralized, autocratic, corrupt, deeply delusional regime such as the one in Beijing? Dean Koontz writing dark comedy.

LIKE IT OR NOT GHOSTS WILL MOVE IN FIRST IF THE BUILDINGS REMAIN UNOCCUPIED FOR TOO LONG!THERE WILL BE JOBS FOR GHOSTS BUSTERS!???THOSE RESPONSIBLE MUST FIRST PROVIDE ATTRACTIVE INCENTIVES AND SUBSIDIES TO THE PUBLIC WITH EXCELLENT CAMPAIGN PUBLICITY AND NOT THINKING OF QUICK PROFITS IN THE SHORT TERM!