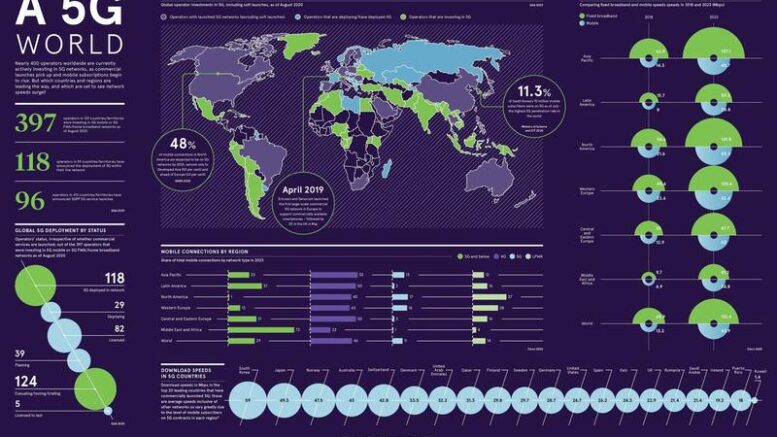 The 5G rollout to the world is a long, enduring process and not merely an event. There are myriad obstacles that have slowed this process, but the goal of energizing the Internet of Everything is ever present. Technocrats see 5G as the holy grail of scientific dictatorship. ⁃ TN Editor

By 2025, the world will reach 1.8 billion 5G connections – led by Developed Asia and North America, two regions that could each see nearly half of mobile connections operating on 5G networks.

This sweeping rollout relies on infrastructure capacities, and, as Visual Capitalist’s Iman Ghosh notes, many operators are buying in big to usher in 5G adoption. This infographic from Raconteur covers where we are on the roadmap towards 5G becoming mainstream, and which regions are leading the way in connectivity.

From its earliest iterations to the Internet of Things, we’ve surpassed three generations of wireless networks. Now, 5G is at a tipping point.

5G is unique in that in order to actually start using the network, you need a device that works on it—unlike previous generations where they could simply switch over. Moreover, carriers need to invest in the infrastructure to optimize network access and the density of devices using it.

As more operators buy into the technology, the latter is finally beginning to happen in some areas. Here’s how the total numbers break down across the world, as of mid-September 2020:

Major phone operators and even tech companies are behind accelerating this change, from Vodafone to Verizon—and most recently, Microsoft has entered the playing field.

As Cisco highlights, there’s more room to grow yet. By 2023, North America will have the highest share of 5G networks, at 17% within the region.

Meanwhile, the Middle East and Africa could have the most catching up to do, with 73% of the region still operating on 3G networks or less in 2023. The good news? Commercial 5G trials in Nigeria may signal the potential of networks leapfrogging ahead.

As the number of 5G networks tick up, there will be an undeniable boost to mobile and broadband speeds (Mbps) across regions by 2023. In particular, Asia Pacific will have the fastest broadband speeds at 157 Mbps while Western Europe will lead with 62 Mbps on mobile.

There is more to it than just 5G. Here in Denmark (EUSSR) they started rolling out 5G in some cities but it turns out that it still not is in the millimeter wavelength bands but merely using “old” unused frequencies.