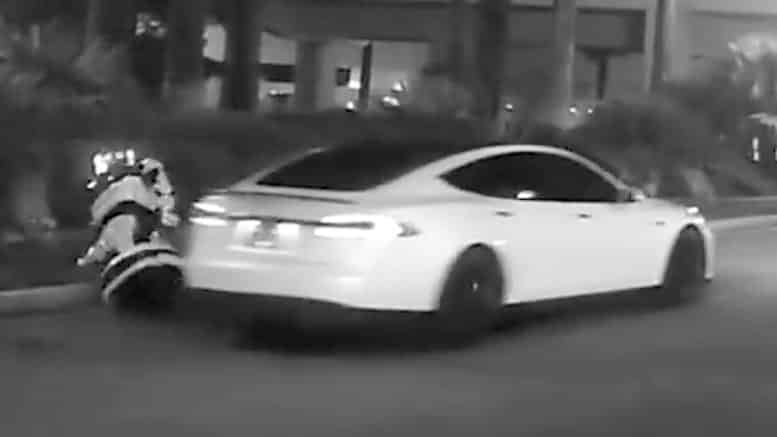 Please Share This Story!
PDF 📄
Considering this as a leadup to the Consumer Electronics Show (CES) in Las Vegas, it could nothing more than  an expensive publicity stunt. Or, it could be that Elon Musk’s AI program had it in for the Russian-made AI that controls Promobot.  ⁃ TN Editor

Tesla has found itself involved in yet another self-driving car accident – and this time, its victim was a $2,000-per-day rentable humanoid robot.

In what many are speculating was an over-the-top PR stunt, Promobot revealed one of its model v4 robots was ‘killed’ by a Tesla Model S on a Las Vegas street ahead of CES.

The accident occurred on Paradise Rd Sunday night as engineers transported the firm’s robots to the display booth.

According to Promobot, a number of robots were making their way to the booth around 7 p.m. when one of them stepped out of line and into the parking lot roadway.

As it did, it was struck by a Tesla Model S operating in autonomous mode.

The crash tipped the robot onto its side, causing ‘serious damage,’ Promobot says.

Now, with parts of its body, head, arm mechanisms, and movement platform destroyed, it cannot be put on display.

The firm says the damage is likely irreparable.

‘We brought this robot here from Philadelphia to participate at CES. Now it neither cannot participate in the event or be recovered.

‘We will conduct an internal investigation and find out why the robot went to the roadway.’

The bizarre news now has many people wondering whether the incident was a PR stunt, or simply an unfortunate coincidence.

The Tesla involved in the collision was operating autonomously, though a passenger was inside at the time.

Hahahahaha! Priceless. So the big question is: who pays the bill when it is one autonomous device destroying another autonomous device? Does the device bear the guilt and burden of its own sin? Or is this like holding officers of a corporation liable for the actions of the corporation itself?