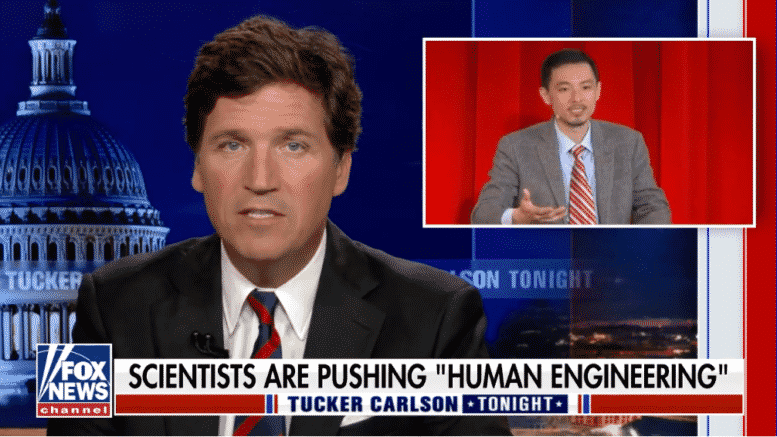 In his 6/22 broadcast, Tucker Carlson lifted the hood on scientists who are promoting Technocracy and Transhumanism via “human engineering.” The particulars he reveals are stunning to most people, but not to students of Technocracy News & Trends.

Nevertheless, Carlson is very close to understanding the elements of Scientism, Transhumanism and Technocracy, but he is not quite there yet. If he had the full historical view in mind, it would set his hair on fire. He has the keys in his hand, but still needs to insert one into the lock and open the door.

The topic of Human Engineering, of course, is central to Transhumanism, a rapidly spreading ideology that applies advanced technology to the human condition in order to create Humanity 2.0, or H+.

This is well documented and chronicled in a number of places, but heretofore it has not been recognized as the huge meme that it is. When enough scientists in enough universities, ngo’s and corporations are focused on achieving the goals of Transhumanism, they have the collective power to do so.

The same is true with Technocracy. The idea itself is powerless, but when enough people and resources are applied to actually make it happen, then everything changes.

For Technocrats and Transhumans, Carlson is hitting close to home. It is the first major national media exposure that relates their outrageous rhetoric to the reality of their actual and intended effects on humanity.

Could the new strains of the Chinavirus be coming out of biolabs around the globe?
Wuham can’t possibly be the only lab weaponizing viruses.

Your royal highness
Reply to  Isbjorn

There is no virus.

Always uncovering! If you read our comments, I beg you: Encourage your followers, donors, guests, etc to re-ignite the movement to Publicly Read the DECLARATION OF INDEPENDENCE on INDEPENDENCE DAY. Read it out loudin a tavern, a fellowship hall, scout clubhouse, campsite, parking lot or the space station. The Patricks and the Tuckers are nothing unless Joe Blow remembers where he is and what he needs to do about it. I am sure you agree. A READER IS A LEADER. As America’s Founders are revisited, Americans will know who to follow, support, donate and learn from. In Payson Arizona we… Read more »

Patrick, you should contact Tucker Carlson’s show and offer to be interviewed about Transhumanism and Technocracy. That would be a great way to educate him and the masses!

Sounds good but it would not be good. They’d take the opportunity to side with the MSM off-loading any pushback from the Black Hand associates to Patrick. They’d likely make him out to be a conspiracy theorist or worse, a fool. If you’ve not been following the MSM in your lifetime know this: That is what they do professionally. If they need a real expert, in time, they will contact Patrick. At that point, he can decide whether or not to step into the lion’s den of the possibilities and potential harm caused to the truth, himself and the rest… Read more »

Well hooray Tucker! You did find the keys. Now, use them! What you said in your report was great but it’s not enough. The problem you’ve exposed to the stupid CNN believers is a worldwide LIE that is continuing. All the major internet corporations are involved–especially those connected to corporate social media sites–FB, Google, Twitter, YT, et al. They have buddies galore, too. BTW–When, exactly when, did Google become an ‘authority’ on anything? I missed that part of the MSM programming. They are a surveillance company, a marketing company and a coding company who writes algorithms for the technocrats that… Read more »

I sent the clip to a friend I’ve had casual conversations with on the topic of technocracy. I wrote, “this is how technocrats, the people who sent to rule you, think. Don’t think for a second you have any choice in the matter. ” His shocked response and recommended solution can’t be repeated here. The average person doesn’t know the kind of sociopaths we’re dealing with. And, make no mistake, they are sociopaths.

The person delivering this absurd talk is insane. The one thing he got right is identifying the danger of geo-engineering, but unfortunately he goes immediately off the cliff by touting human engineering as smaller in scale and therefore safer. His talk is a complete fail as he does not realize that if there indeed are paths we need to avoid, an in-house re-jiggering of our species is certainly one of them. No, my wild-eyed friend, I don’t want you to decide the ultimate form of the prole population. Sorry, but just “no.” This fellow is either dangerous or engaging in… Read more »

Tackling climate change? Let’s tackle fasco-Marxist STUPIDITY first. Given that it was WARMER during the MWP than today.. oh wait, the warmers are too STUPID to even know what that basic climatological term means, nor the LIA.