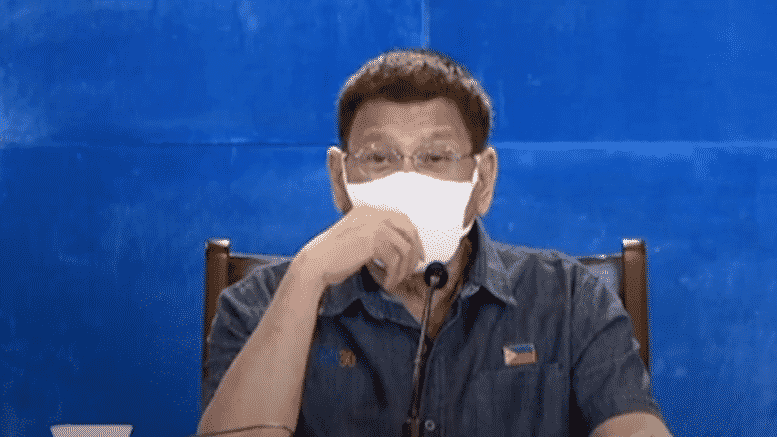 Please Share This Story!
PDF 📄
Of the 100 million population in the Philippines, only 8 percent have been willing to take the COVID vaccine. President Rodrigo Duterte now threatens to incarcerate the remaining 92 percent if they don’t get vaccinated immediately.

This comes on the heels of Duterte’s campaign to kill drug dealers by sending out “death squads” authorized for summary execution without trial or due process of any kind. Thus, you could die if you take unauthorized drugs or face jail if you don’t take authorized drugs. ⁃ TN Editor

President Rodrigo Duterte threatened to jail people who refuse to be vaccinated against the coronavirus as the Philippines battles one of Asia’s worst outbreaks, with over 1.3 million cases and more than 23,000 deaths.

“You choose, vaccine or I will have you jailed,” Duterte said in a televised address on Monday following reports of low turnouts at several vaccination sites in the capital Manila.

Duterte’s remarks contradict those of his health officials who have said that while people are urged to receive the COVID-19 vaccine, it was voluntary.

“Don’t get me wrong, there is a crisis in this country,” Duterte said. “I’m just exasperated by Filipinos not heeding the government.”

As of June 20, Philippine authorities had fully vaccinated 2.1 million people, making slow progress towards the government’s target to immunise up to 70 million people this year in a country of 110 million.

Duterte, who has been criticised for his tough approach to containing the virus, also stood by his decision not to let schools reopen.

In the same address, he took a swipe at the International Criminal Court, after an ICC prosecutor had sought permission from the court for a full inquiry into the drug war killings in the Philippines. read more

Duterte, who in March 2018 cancelled the Philippines’ membership of the ICC’s founding treaty, repeated he will not cooperate with the probe, describing the ICC as “bullshit”.

“Why would I defend or face an accusation before white people. You must be crazy,” Duterte said, who after winning the presidency in 2016 unleashed an anti-narcotics campaign that has killed thousands.

Extremely IMPORTANT!! PLEASE SPREAD AS FAST AND WIDE AS POSSIBLE, it is the partial result of magentization of HUMAN beings after the covid injections:
https://www.efvv.eu/images/content/2021/0617/study-on-electromagnetism-of-vaccinated-persons-in-luxembourg_6edfa.pdf

I tried the magnet on my hubby who had the Pfizer shots and NO magnets stuck to either arm! I don’t think this is true! I myself haven’t gotten either or any of the shots and don’t plan to! Too risky! 🙁

I hope and pray that God will find an end solution for this sick criminal very quickly.

[…] Duterte: ‘Vaccine Or I Will Have You Jailed’ – from Patrick Wood – https://www.technocracy.news/philippines-duterte-vaccine-or-i-will-have-you-jailed/ – “This comes on the heels of Duterte’s campaign to kill drug dealers by sending out […]

Without divine intervention. It’s starting to look to me like lose your health and lose everything else.

“You choose vaccine or I will have you jailed,” Man, this guy is piece of work. Not a choice, rather more like a death threat to the Philippine people. It has become interesting to me how the line-up of representative despots worldwide has been rolled out. In the words of Samuel Jackson in Formula 51 “shit don’t just happen; shit takes time.” The Black Hand families have used their time wisely over the last decade to install a barricade of official evil puppets in every country they could managed to touch and intimidate. That success puts me in mind of… Read more »

I heard the leaders of every country of the UN met at Davos in early March of 2020 and openly admired how China handled the virus. They decided to try it out on their countries.
Drunk on power now. Weird how stupid they also have grown.
Place holders to demoralize, destabilize and impoverish. Grooming us for the technocrat takeover.

Hmm. 92% of the population.
Guess this dictator is planning on building a lot of jails.