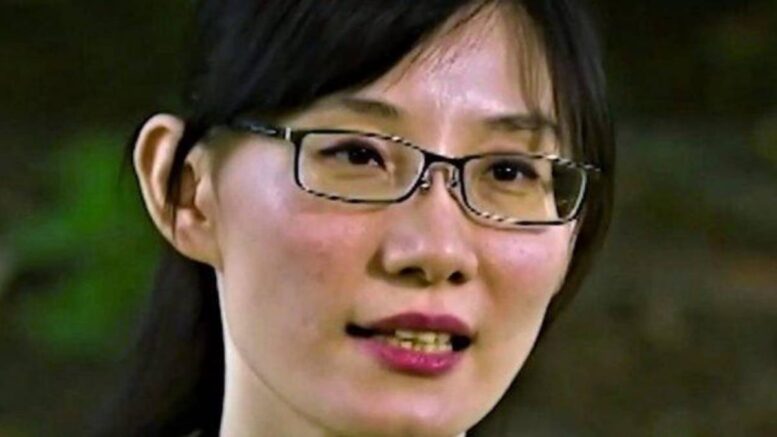 Please Share This Story!
PDF 📄
This scientific report is co-authored by virologist Li-Meng Yan who recently announced that the SARS-CoV-2 was man-made and intentionally weaponized in a Chinese bio-lab. As retribution, Yan’s mother has been arrested in China.

It is important to go to the original source and download the report, since China is pulling every string in its toolbox, including kidnapping, to delete the report. ⁃ TN Editor

Two possibilities should be considered for the origin of SARS-CoV-2: natural evolution or laboratory creation. In our earlier report titled “Unusual Features of the SARS-CoV-2 Genome Suggesting Sophisticated Laboratory Modification Rather Than Natural Evolution and Delineation of Its Probable Synthetic Route”, we disproved the possibility of SARS-CoV-2 arising naturally through evolution and instead proved that SARS-CoV-2 must have been a product of laboratory modification. Despite this and similar efforts, the laboratory creation theory continues to be downplayed or even diminished. This is fundamentally because the natural origin theory remains supported by several novel coronaviruses published after the start of the outbreak.

These viruses (the RaTG13 bat coronavirus, a series of pangolin coronaviruses, and the RmYN02 bat coronavirus) reportedly share high sequence homology with SARS-CoV-2 and have altogether constructed a seemingly plausible pathway for the natural evolution of SARS-CoV-2. Here, however, we use in-depth analyses of the available data and literature to prove that these novel animal coronaviruses do not exist in nature and their sequences have been fabricated. In addition, we also offer our insights on the hypothesis that SARS-CoV-2 may have originated naturally from a coronavirus that infected the Mojiang miners.

Revelation of these virus fabrications renders the natural origin theory unfounded. It also strengthens our earlier assertion that SARS-CoV-2 is a product of laboratory modification, which can be created in approximately six months using a template virus owned by a laboratory of the People’s Liberation Army (PLA). The fact that data fabrications were used to cover up the true origin of SARS-CoV-2 further implicates that the laboratory modification here is beyond simple gain-of-function research.

The scale and the coordinated nature of this scientific fraud signifies the degree of corruption in the fields of academic research and public health. As a result of such corruption, damages have been made both to the reputation of the scientific community and to the well-being of the global community.

Importantly, while SARS-CoV-2 meets the criteria of a bioweapon specified by the PLA, its impact is well beyond what is conceived for a typical bioweapon. In addition, records indicate that the unleashing of this weaponized pathogen should have been intentional rather than accidental. We therefore define SARS-CoV-2 as an Unrestricted Bioweapon and the current pandemic a result of Unrestricted Biowarfare. We further suggest that investigations should be carried out on the suspected government and individuals and the responsible ones be held accountable for this brutal attack on the global community.

crock of shit, excuse me but covid does not exist. It was never isolated. Dr. Stefan Lanka. Dr. Andrew Kaufman. Dr. Robert Young. Viruses are exosomes, anyone still on Germ Theory and believes there is a virus to begin with is 5 steps behind. This bioweapon narrative was a military psy op to get western military and government to believe in such a fraud to initate the lockdown and for justification of it. Much like the Planes on 911 which did not exist but was digitally induced, they needed planes to orchestrate and frame it as an attack for measures… Read more »

Interestingly You tube has take down most of the videos in your first link. Surprise, surprise. The narrative must continue to the masses. Since when does America trust communist countries?

Excellent. I don’t believe the virus itself is hoax, but the real hoax has been propping this up to more than a strain of the flue. Sites like this further the scam, which on the side pushes the anti-china war mongering agenda.

I have known their exosomes theory. However, genome sequences with more than 29,000 bases have been registered.
And Yale study says that SARS-CoV-2 was detected in neurons. All in all, it seems that the virus exists.

“Finally, in brain autopsy from patients who died of COVID-19, we detect SARS-CoV-2 in the cortical neurons, and note pathologic features associated with infection with minimal immune cell infiltrates. These results provide evidence for the neuroinvasive capacity of SARS-CoV2, and an unexpected consequence of direct infection of neurons by SARS-CoV-2.”
Neuroinvasion of SARS-CoV-2 in human and mouse brain
https://www.biorxiv.org/content/10.1101/2020.06.25.169946v2

Not really.
“The analytical sensitivity of the rRT-PCR assays contained in the CDC 2019 Novel Coronavirus (2019- nCoV) Real-Time RT-PCR Diagnostic Panel were determined in Limit of Detection studies. Since no quantified virus isolates of the 2019-nCoV are currently available, assays designed for detection of the 2019-nCoV RNA were tested with characterized stocks of in vitro transcribed full length RNA (N gene; GenBank accession: MN908947.2)…”
https://www.fda.gov/media/134922/download

So people, is there a virus or is there not a virus? If there is not a virus then she is lying. https://blog.nomorefakenews.com/2020/10/09/covid-the-virus-that-isnt-there-the-root-fraud-exposed/ The only way then it is a bioweapon is that it was all made up and America has stood down to a bogeyman created in the minds of the elite for the purpose of destroying America and setting up a One World System.

Thats their plan,its taken over 2 centuries to achieve, ALMOST COMPLETE,if we keep ACQUIESCING, and wearing stupid masks that weaken your immune system ready for this years flu season so they can carry on this farce for ever ! The planned intention of a DNA changing vaccine of GATES ‘They will release a man-made coronavirus. As a result the people will demand a vaccine to protect them. This vaccine will add a third strain of DNA to a persons body, essentially making them a hybrid. Once a person is injected, almost immediately their DNA undergoes a transformation. This genetic change… Read more »

@just sayin, It doesn’t really matter. The Germ theory was wrong. If a single germ could kill us, there would be no on left on the planet to believe it. There are billions of pathogens and they start attaching us the minute we are conceived. That’s why our immune systems are so important. The commercial interests have been behind the suppression of highly validated alternative medical cures since the late 1900s and even against other technologies like some of Nicola Tesla’s they couldn’t steal or buy from him. We also know the eugenics folks are out there and Bill Gates’s… Read more »

I agree with Dan that this virus has never been proven. But just for grins, let’s assume this is a real virus. If that is the case, and if it was created as a bioweapon, it was a really sorry excuse for one. Statistically it has done nothing. Deaths remain within the realm of normal. So I am in agreement that this is a sham, that this young lady is a plant to sow false information and to detract from the real agenda of the psychopaths that want to have full control over humanity, the “fourth industrial revolution” in which… Read more »

I follow your website and believe many things you say however nobody is perfect even the smartest and well educated person can be fooled by intelligence agencies disinformation I don’t believe too much in this bioweapon Chinese story because if it was a bio weapon it is a very weak on considering that even with the W H O inflated death toll this bio weapon has a death rate of 0.05% and the majority of people testing “positive” do not even get sick…Donald Trump proving my point ,I live in NY and practically never wear a mask except a few… Read more »

The planned intention of a DNA changing vaccine of GATES ‘They will release a man-made coronavirus. As a result the people will demand a vaccine to protect them. This vaccine will add a third strain of DNA to a persons body, essentially making them a hybrid. Once a person is injected, almost immediately their DNA undergoes a transformation. This genetic change will cause people to loose the ability to think for themselves, without them even being aware this happened. Thus they can be controlled easier, to become slaves for the elite.’

There is no virus. End of the story.
https://www.fda.gov/media/134922/download#page=39
https://www.lewrockwell.com/2020/10/jon-rappoport/the-smoking-gun-where-is-the-coronavirus-the-cdc-says-it-isnt-available/

Watch facebook call this false. They need to shut off their algorithms and provide time for truth to come out. She’s got nothing to gain by lying – and everything to lose by telling the truth. I’m posting the story on FB anyway with a request that they turn off their algorithms on this story. Again, she’s got no reason to lie.

Please follow Jon Rappaport. He has done extensive work showing the non- existence of Covid-19. I’m getting fatigued by tying to reason with unreasonable individuals.

Back in the 90s I came across a German article describing that the future of bioweapons was already here. It described easily transmittable viruses that carried the adjutants for later application. These adjutants could be selective by genetics or by other identifiable and predetermined factors. In particular it described the ability to target race-based genes. Put to good use, such targeting could focus on curing diseases such as tay-sachs (primarily Jews) or sickle cell anemia (primarily Blacks) — these would be the funded applications. The article further described the ability to set up a 1-2 punch that in biowarfare might… Read more »

But the patents are from the U.S. and U.K. and we know the U.S. and private groups were involved with the lab in Wuhan.

Does any one have any evidence John Hopkins are manipulating the numbers? It pretty common knowledge they have long been in bed with with the Bankers and Big Pharma.

It’s simple. China wanted retribution for the anti China trade stance and other countries looking at India as a possible and potential trading partner. This is why they released this virus as part of the bigger globalist /communist plan to crash the capitalist economy and return power back to China.Now the communist minions installed on all global political groups can execute their agenda as they are compromised. Remove Trump, remove freedom and liberty and voila! New world tyrannical order and powerful China.