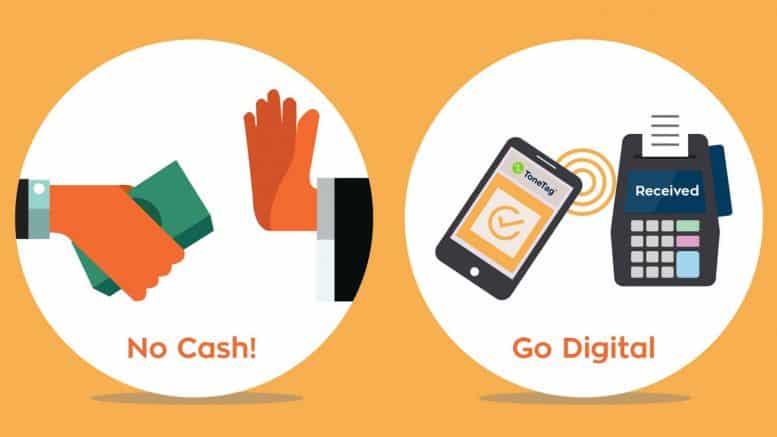 Bribery by any other name is still bribery, especially when we already know that the global elite are stampeding to a cashless society. The same program is being executed in India, for instance. Technocracy cannot be established except that ‘no person is left behind.’ Without cash everyone is forced into the system if they merely want to survive in the intended new world order. ⁃ TN Editor

SAN FRANCISCO–(BUSINESS WIRE)–Jul. 12, 2017– Today Visa (NYSE:V) announced it is launching a major effort to encourage businesses to go cashless. Aiming to create a culture where cash is no longer king, the program will give merchants increased ability to accept all forms of global digital payments. Visa will be encouraging and helping merchants go cashless by using innovation to their advantage in order to stay competitively connected to their customers.

To encourage businesses to go cashless, Visa is announcing The Visa Cashless Challenge, with a call to action for small business restaurants, cafés or food truck owners to describe what cashless means for them, their employees and customers. Visa will be awarding up to $500,000 to 50 eligible US-based small business food service owners who commit to joining the 100% cashless quest.

“At Visa, we believe you can be everywhere you want to be, and that it should be easy to pay and be paid in more ways than ever – whether it’s a phone, card, wearable or other device,” said Jack Forestell, head of global merchant solutions, Visa Inc. “With 70% of the world, or more than 5 billion people, connected via mobile device by 20201, we have an incredible opportunity to educate merchants and consumers alike on the effectiveness of going cashless.”

Visa has recognized the net benefits for merchants when they reduce dependency on cash transaction. Visa recently conducted a study that found that if businesses in 100 cities transitioned from cash to digital, their cities stand to experience net benefits of $312 billion per year. According to this study, in New York City alone, businesses could generate an additional $6.8 billion in revenue and save more than 186 million hours in labor, by making greater use of digital payments. This amounts to more than $5 billion annual costs savings for businesses in New York. The complete results with the benefits of going cashless for businesses will be included in the “Cashless Cities: Realizing the Benefits of Digital Payments” report that will be released by Visa later this year.

To showcase the benefits of going cashless, Visa will tap into its sponsorship as the official payment partner of Formula E to offer cashless, digital payment acceptance at the first-ever Formula E race in Brooklyn, the New York City ePrix.

In addition, local New York City restaurants, including 2nd City, Fish Cheeks, and Mulberry and Vine are offering their customers cashless experiences during the race weekend. These participating venues are bringing to life paperless, seamless and enhanced payment experiences for their customers over the weekend.

“To Visa, a cashless culture means convenience, security and ease of use”
Screw the inconvenience, hackability and pain in the arse to users.

A local deli/luncheonette that opened about a year ago here in North Jersey tells me that the bank will charge a fee if you deposit cash. JP Morgan Chase will not accept cash deposits over $10,000. The fee for depositing cash will increase, and the cash deposits accepted will continue to decrease.