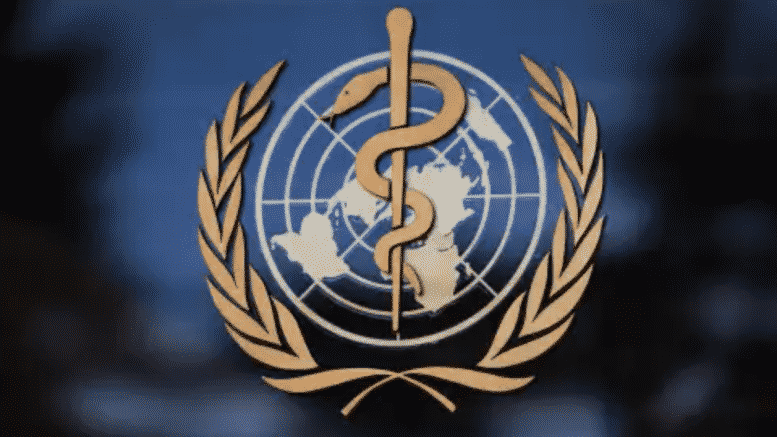 Please Share This Story!
PDF 📄
The mind of a Technocrat is clearly revealed as the WHO declares that the vaccine is the only solution to fix the pandemic. A person’s own immune system is deemed inadequate but the vaccine can remedy that, they say. This discards 150 years of proven scientific fact. ⁃ TN Editor

Maybe you have some sense that something fishy is going on? Same. If it’s not one thing, it’s another.

Coronavirus lived on surfaces until it didn’t. Masks didn’t work until they did, then they did not. There is asymptomatic transmission, except there isn’t. Lockdowns work to control the virus except they do not. All these people are sick without symptoms until, whoops, PCR tests are wildly inaccurate because they were never intended to be diagnostic tools. Everyone is in danger of the virus except they aren’t. It spreads in schools except it doesn’t.

On it goes. Daily. It’s no wonder that so many people have stopped believing anything that “public health authorities” say. In combination with governors and other autocrats doing their bidding, they set out to take away freedom and human rights and expected us to thank them for saving our lives. At some point this year (for me it was March 12) life began feeling like a dystopian novel of your choice.

Well, now I have another piece of evidence to add to the mile-high pile of fishy mess. The World Health Organization, for reasons unknown, has suddenly changed its definition of a core conception of immunology: herd immunity. Its discovery was one of the major achievements of 20th century science, gradually emerging in the 1920s and then becoming ever more refined throughout the 20th century.

Herd immunity is a fascinating observation that you can trace to biological reality or statistical probability theory, whichever you prefer. (It is certainly not a “strategy” so ignore any media source that describes it that way.) Herd immunity speaks directly, and with explanatory power, to the empirical observation that respiratory viruses are either widespread and mostly mild (common cold) or very severe and short-lived (Ebola).

Why is this? The reason is that when a virus kills its host, it cannot migrate. The more aggressively it does this, the less it spreads. If the virus doesn’t kill its host, it can hop to others through all the usual means. When you get a virus and fight it off, your immune system encodes that information in a way that builds immunity to it. When it happens to enough people (and each case is different so we can’t put a clear number on it) the virus loses its pandemic quality and becomes endemic, which is to say predictable and manageable. Each new generation incorporates that information through more exposure.

This is what one would call Virology/Immunology 101. It’s what you read in every textbook. It’s been taught in 9th grade cell biology for probably 80 years. Observing the operations of this evolutionary phenomenon is pretty wonderful because it increases one’s respect for the way in which human biology has adapted to the presence of pathogens without absolutely freaking out.

And the discovery of this fascinating dynamic in cell biology is a major reason why public health became so smart in the 20th century. We kept calm. We managed viruses with medical professionals: doctor/patient relationships. We avoided the Medieval tendency to run around with hair on fire but rather used rationality and intelligence. Even the New York Times recognizes that natural immunity is powerful with Covid-19, which is not in the least bit surprising.

Until one day, this strange institution called the World Health Organization – once glorious because it was mainly responsible for the eradication of smallpox – has suddenly decided to delete everything I just wrote from cell biology basics. It has literally changed the science in a Soviet-like way. It has removed with the delete key any mention of natural immunities from its website. It has taken the additional step of actually mischaracterizing the structure and functioning of vaccines.

So that you will believe me, I will try to be as precise as possible. Here is the website from June 9, 2020. You can see it here on Archive.org. You have to move down the page and click on the question about herd immunity. You see the following.

That’s pretty darn accurate overall. Even the statement that the threshold is “not yet clear” is correct. There are cross immunities to Covid from other coronaviruses and there is T cell memory that contributes to natural immunity.

Some estimates are as low as 10%, which is a far cry from the modelled 70% estimate of virus immunity that is standard within the pharmaceutical realm. Real life is vastly more complicated than models, in economics or epidemiology. The WHO’s past statement is a solid, if “pop,” description.

However, in a screenshot dated November 13, 2020, we read the following note that somehow pretends as if human beings do not have immune systems at all but rather rely entirely on big pharmacy to inject things into our blood. 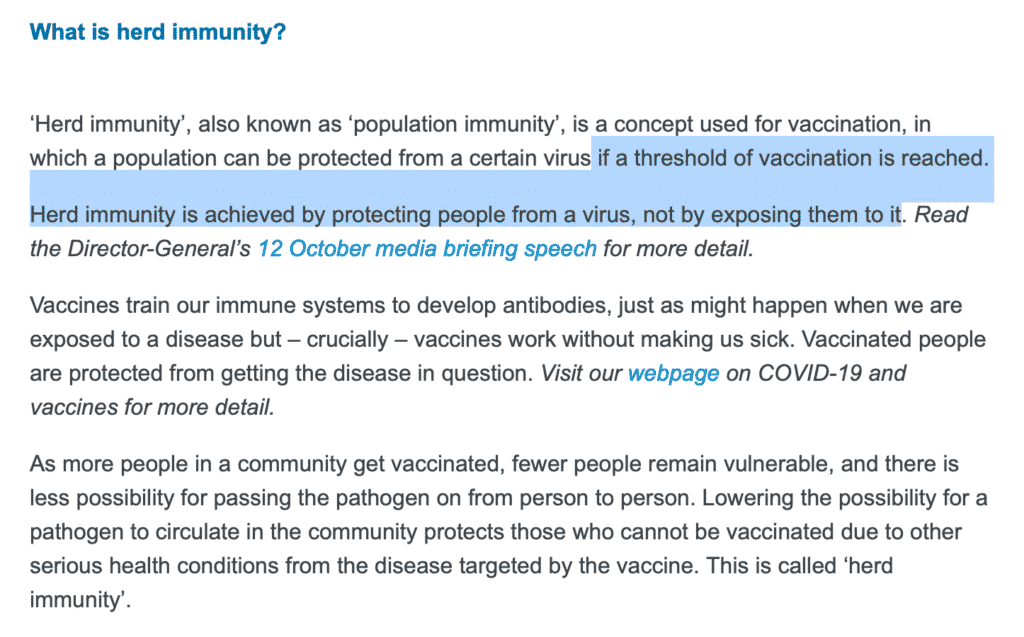 What this note at the World Health Organization has done is deleted what amounts to the entire million-year history of humankind in its delicate dance with pathogens. You could only gather from this that all of us are nothing but blank and unimprovable slates on which the pharmaceutical industry writes its signature.

In effect, this change at WHO ignores and even wipes out 100 years of medical advances in virology, immunology, and epidemiology. It is thoroughly unscientific – shilling for the vaccine industry in exactly the way the conspiracy theorists say that WHO has been doing since the beginning of this pandemic.

What’s even more strange is the claim that a vaccine protects people from a virus rather than exposing them to it. What’s amazing about this claim is that a vaccine works precisely by firing up the immune system through exposure. Why I had to type those words is truly beyond me. This has been known for centuries. There is simply no way for medical science completely to replace the human immune system. It can only game it via what used to be called inoculation.

Take from this what you will. It is a sign of the times. For nearly a full year, the media has been telling us that “science” requires that we comply with their dictates that run contrary to every tenet of liberalism, every expectation we’ve developed in the modern world that we can live freely and with the certainty of rights. Then “science” took over and our human rights were slammed. And now the “science” is actually deleting its own history, airbrushing over what it used to know and replacing it with something misleading at best and patently false at worst.

I cannot say why, exactly, the WHO did this. Given the events of the past nine or ten months, however, it is reasonable to assume that politics are at play. Since the beginning of the pandemic, those who have been pushing lockdowns and hysteria over the coronavirus have resisted the idea of natural herd immunity, instead insisting that we must live in lockdown until a vaccine is developed.

That is why the Great Barrington Declaration, written by three of the world’s preeminent epidemiologists and which advocated embracing the phenomenon of herd immunity as a way of protecting the vulnerable and minimizing harms to society, was met with such venom. Now we see the WHO, too, succumbing to political pressure. This is the only rational explanation for changing the definition of herd immunity that has existed for the past century.

The science has not changed; only the politics have. And that is precisely why it is so dangerous and deadly to subject virus management to the forces of politics. Eventually the science too bends to the duplicitous character of the political industry.

When the existing textbooks that students use in college contradict the latest official pronouncements from the authorities during a crisis in which the ruling class is clearly attempting to seize permanent power, we’ve got a problem.

Early In-Home Treatment for COVID-19 Desperately Needed. The political hysteria in the United States surrounding COVID-19 has taken away critical focus on the “Early Treatment” phase of this disease, and will go down in US medical history as an incredible blunder. Imagine not treating patients at home with proven prescription medications but instead forcing them to wait until they are sick enough to be admitted to a hospital for real medications. While the US population, politicians and the medical profession argue about masks, social distancing, testing, shutdowns and vaccines, several other countries, notably India, have focused on distributing “Home Treatments… Read more »

Many Americans are simply dummies, unlike most Europeans and Easterners, so their opinions are manipulated by deceitful politicians, especially Trump and the big pharmaceutical companies!

This is all about making sure that vaccinations are mandated, whether they are needed or not.

This virus was created to distroy our economy that President Trump created.& Take away our freedom of religion .. it is a plan to distroy USA

These creatures are Satanic anti Nature… they want to be god’s producing a new human to use as a slave and serf… meanwhile they will breed like F Rabbits..

The whole infection theory is bullcrap. Find out about the only scientific method: German New Medicine of Dr. Geerd Ryke Hamer.

So ,it sounds as though Masks,and “Social Distancing” may actually be prolonging the virus and slowing Immunity. Just as the Liberals intended in the first place!