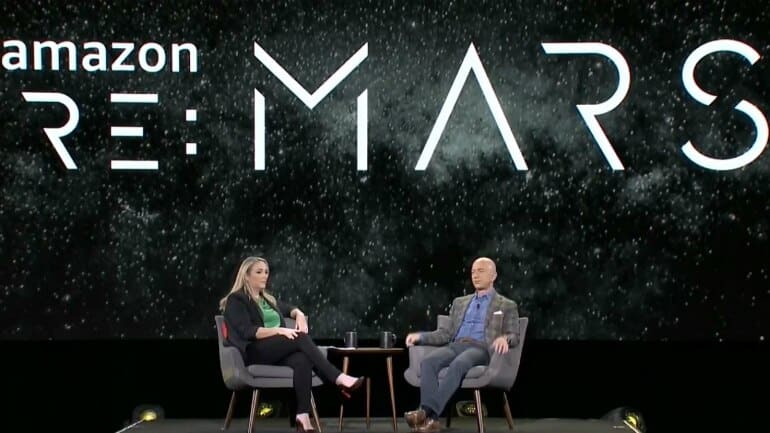 Apparently, AOC’s Green New Deal isn’t enough to save the earth; Jeff Bezos now says we must also send humanity into space. The logical end of Technocracy, which is based on Scientism, is always lunacy.  ⁃ TN Editor

Bezos said, “Predictions on a ten year-time frame are hard to make and often wrong. The only good thing is nobody goes and checks.” But then he offered a few broad predictions anyway.

He said he believes robots will soon be able to grasp objects as well as humans within a decade, including in commercial settings. And he said he expects great advances in machine learning, artificial intelligence and biotech over the next decade.

“I do get asked, quite frequently ‘What’s gonna change in the next 10 years?’ I’m rarely get asked, and it’s probably more important — and I encourage you to think about this — is the question what’s not going to change? The answer to that question can allow you to organize your activities. You can work on those things with the confidence to know that all the energy you put into them today is still going to pay dividends in the years to come.”

As an example, he said in Amazon’s e-commerce business, in a decade people will still want low prices, fast shipping and a big selection. “Nobody’s going to say Jeff, I love Amazon I just wish you’d deliver a little more slowly. I love Amazon, I just wish your prices were a little higher,” the CEO quipped.

Freshwater asked Bezos why Blue Origin is focused on lunar exploration. The company is building a lunar lander, and aims to help return astronauts to the moon.

Bezos said, “The reason we go to space in my view is to save the Earth.” He said while he doesn’t expect this to happen in his lifetime, he believes that in future generations, humankind needs to move heavy industry off Earth, and leave Earth as our residence.